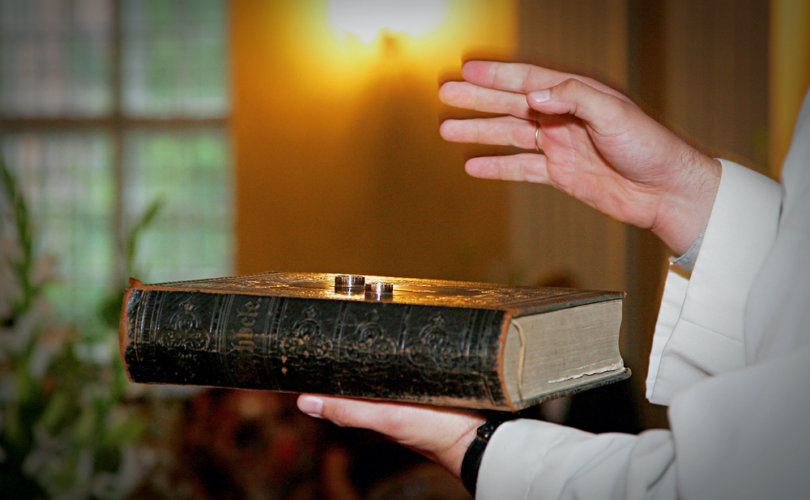 VATICAN CITY  (LifeSiteNews) – Pope Francis has removed an archbishop from his position as a second-in-command Secretary of the powerful Congregation for the Doctrine of the Faith (CDF), reportedly because he was the driving force behind last year’s CDF document denouncing proposed ‘blessings’ for same-sex couples.

Archbishop Giacomo Morandi has been named by Pope Francis as bishop of the Italian diocese of Reggio Emilia-Guastalla – a move viewed by Vatican observers as a demotion because he will now shepherd a diocese, not an archdiocese, although Morandi will retain the title “Archbishop.”

A prolific, if pseudonymous, Twitter commentator, believed to be a Vatican insider, proposed that Morandi was demoted because he was “less than enthusiastic” about the pontiff’s crackdown on the Traditional Latin Mass.

“Today’s victim of  Francis’ displeasure is Archbishop Giacomo Morandi, the Secretary of the CDF; he has been sent to Reggio Emilia-Guastalla,” wrote Twitter user Monsignor Ferrari.

“Because he was less than enthusiastic about TC [Traditionis custodes],” he continued.

“It is about creating fear in the Vatican, as if we didn’t have enough,” added Ferrari.

Today’s victim of Francis displeasure is Archbishop Giacomo Morandi, the Secretary of the CDF, he has been sent to Reggio Emilia-Guastalla.

Because he was less than enthusiastic about TC.
It is about creating fear in the Vatican, as if we didn’t have enough. pic.twitter.com/9yJHB418nP

But since the CDF issued its statement barring the blessing of homosexual relationships, Pope Francis has rewarded dissident religious who promote the normalization of homosexuality within the Church with warm personal letters of thanks and encouragement – gestures which now stand in stark contrast to his harsh treatment of Archbishop Morandi.

The move by Francis against Morandi is seen as the beginning of an overhaul of the vast Vatican bureaucracy, possibly shifting power away from the CDF, placing the guardian of Church doctrine in a position of less prominence under a proposed Dicastery for Evangelization.

In March 2021, LifeSiteNews reported that the CDF had declared that it is “not licit to impart a blessing on relationships, or partnerships, even stable, that involve sexual activity outside of marriage (i.e., outside the indissoluble union of a man and a woman open in itself to the transmission of life), as is the case of the unions between persons of the same sex.”

— Article continues below Petition —
PETITION: Appeal to Catholic Leaders to reject abortion-tainted COVID vaccines and mandates!
Show Petition Text
11310 have signed the petition.
Let's get to 12500!
Thank you for signing this petition!
Add your signature:
Show Petition Text

The CDF explained that blessings “belong to the category of the sacramentals, whereby the Church ‘calls us to praise God, encourages us to implore his protection, and exhorts us to seek his mercy by our holiness of life.’”

It pointed out that to receive a blessing, one must “be objectively and positively ordered to receive and express grace, according to the designs of God inscribed in creation, and fully revealed by Christ the Lord.”

Blessings for homosexual couples have been pushed by Catholic leaders in Germany, especially, including Cardinal Reinhard Marx and other bishops who form part of the country’s “Synodal Path” and have called for a liturgical blessing of such relationships.

In a 2019 Declaration of Truth, Catholic Church leaders such as Cardinal Raymond Burke and Bishop Athanasius Schneider wrote that two persons of the same sex “sin gravely when they seek venereal pleasure from each other.”

Gerhard Cardinal Müller, former prefect of the Congregation for the Doctrine of the Faith, commented about blessings for homosexual couples, saying, “On the morning of creation, God blessed the first marriage as the union of a man and a woman. A union of whatever kind, which is contrary to God’s Will, cannot at the same time be declared to be approved by God.”

“For to bless, benedicere, means to declare something to be good and to become good in God’s view and towards God,” he commented.

“However, no other forms of living together can be blessed by the Church — if she remains loyal to her Divine Founder — except marriage and consecrated life; individuals, on the other hand, can all be blessed,” he continued.

“This does not only refer to the partnership of people with sexual inclinations to persons of their own sex. Also the partnership of a man and several women or of a woman and several men cannot be blessed by the Church. Even normal friendships are not formally blessed. Marriage between a man and a woman is part of the essential characteristic of the Church, since it is the fertile nucleus of the Christian family. It was instituted as a Sacrament by Jesus Christ and is inseparable from the community of believers. It is only with Jesus that, in the face of many an obscuration (caused by Original Sin) of marriage, God’s original Will for monogamy, indissolubility, openness to the child and sacramentality has once again become fully apparent.”