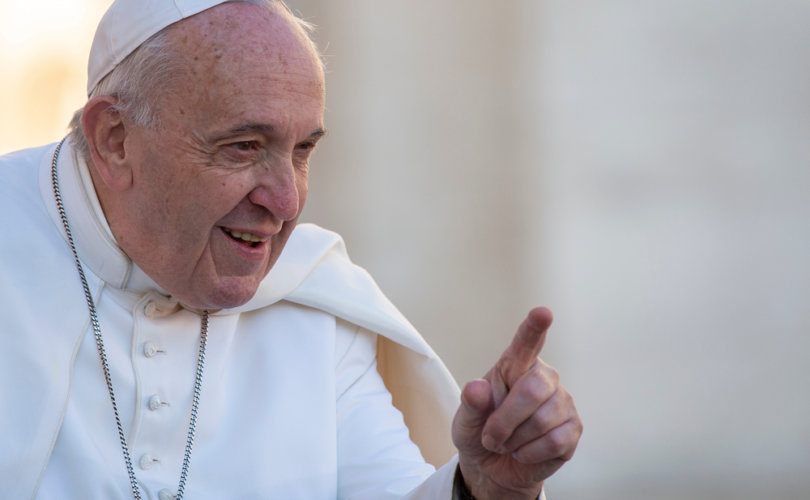 VATICAN CITY (LifeSiteNews) – Pope Francis has announced that he has no plans to retire from the papacy in an interview published Monday, stating that the notion of resigning has “never entered” his mind.

Speaking to Reuters’ Vatican reporter Philip Pullella in a 90-minute interview Saturday, Pope Francis answered growing speculation that he intends to resign his position as the earthly leader of the Catholic Church, dismissing the idea as rumor.

In an exclusive interview with @Reuters, Pope Francis said he was not planning to resign anytime soon https://t.co/ZYoBa4WrQS pic.twitter.com/G4rijmoVqt

A combination of events in recent months, including a new consistory of cardinals and a planned trip to the Italian city of L’Aquila, had sparked speculation that the Pontiff would retire, especially given the city’s association with Pope Celestine V and Pope Benedict XVI, both of whom resigned the papacy.

Furthermore, Francis has suffered a sustained knee injury which has confined him to a wheelchair in the last few months. It has resulted in many cancelations in his travel schedule.

The Pope said that he still hopes to visit Canada this month, despite his knee injury, and plans to visit Kyiv and Moscow soon afterwards.

However, when it comes to his impending resignation the Pope reportedly “laughed the idea off” and confirmed that the supposed conditions of his retirement are merely “coincidences.”

“But it [retirement] never entered my mind. For the moment no, for the moment, no. Really!” Francis said.

The 85-year-old pontiff later made a point of clarification, recognizing that his ailing health could see him step down from the Petrine office. He stressed that he does not know when that might happen.

During the interview the Pope also touched briefly on the recent overturning of Roe v. Wade by the U.S. Supreme Court, which now permits states to legislate against abortion completely.

While reportedly respecting the court’s ruling against a constitutional “right” to abortion, Pullella wrote that Francis said he cannot “speak about it from a juridical point of view” because he had not studied the law.

While the pontiff condemned the act of procuring an abortion as being like “hiring a hitman,” he went on to state that the Church ought to be “pastoral” toward pro-abortion politicians, such as Catholic Speaker of the House Nancy Pelosi, a term which critics have taken as a byword for “permissive.”

Pelosi has been regularly receiving the Eucharist despite her ardent advocacy for abortion. Although she has been barred from Holy Communion by her local bishop, Archbishop Salvatore Cordileone of San Francisco, owing to her obstinate support of abortion, the prominent politician received Holy Communion at a Papal Mass on Wednesday.