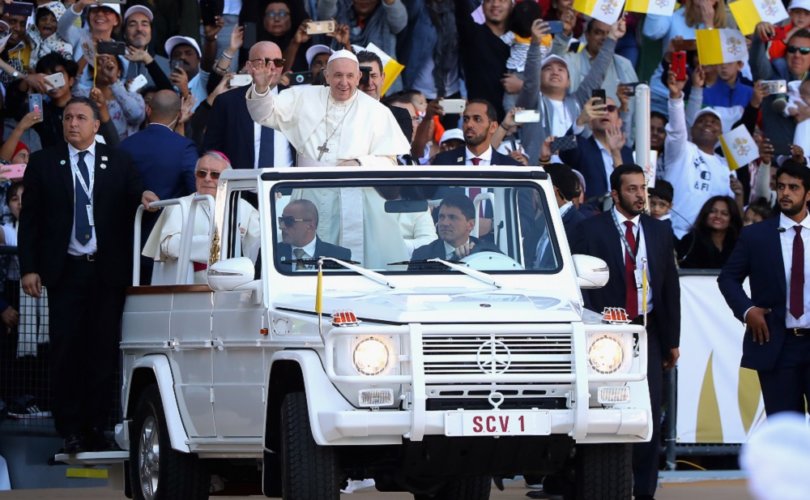 ROME, November 7, 2019 (LifeSiteNews) — Offering his thoughts on the Amazon Synod, Pope Francis excoriated certain “circles and sectors” who allegedly consider much of humanity a “lower-class entity” with scant “spiritual and intellectual life.” These unnamed individuals, the pope opined, hope out of racism or bigotry to withhold the Gospel.

Pope Francis spoke with Italian journalist Gianni Valente during interviews conducted during the recent Amazon Synod. In talks gathered into a book in Italian titled Without Him We Can Do Nothing, the pontiff described his vision for the Church to embrace a missionary spirit, even while he blasted unnamed groups for mischaracterizing others as “lower-class.”

In the interview, the pope said, “There are circles and sectors that present themselves as ilustrados [enlightened] — they sequester the proclamation of the gospel through a distorted reasoning that divides the world between ‘civilization’ and ‘barbarism.'”

Pope Francis said, “The idea that the Lord has among his favorites many dark-complexioned people irritates them, it puts them in a bad mood. They consider a large part of the human family as a lower-class entity, incapable, according to their standards, of achieving decent levels in spiritual and intellectual life. On this basis, contempt can develop for people considered to be second-rate,” he said, adding that “all this also emerged during the Synod of Bishops for the Amazon.”

Perhaps signaling to his native country, the pope referred to “cabecitas negras” (literally, “little black heads”) — an Argentine slang term deriding people of dark complexion. When reports emerged from the synod that there were alleged aspersions cast at the feather headdresses used by some of the indigenous participants in the conference, Pope Francis deplored the “sarcastic words” directed at indigenous people wearing feathers. He said, “Tell me: what’s the difference between having feathers on your head and the three-peaked hat [birettas] worn by certain officials in our dicasteries?”

The book was released on November 5 and coincided with the close of Extraordinary Missionary Month in October. During October, the Vatican hosted the Amazon Synod, which had the ostensible goal of discussing how the Gospel can be proclaimed in the remote regions of South America, issues of inculturation, and ordination of mature married men to the priesthood in the Latin Rite. Even before the synod’s outset, controversy was stirred by the instrumentum laboris — the working document that offered points of discussion and goals to be met at the synod. Critics of the document included Cardinals Raymond Burke, Walter Brandmüller, and Gerhard Müller. Cardinal Brandmüller called the document “heretical” and an “apostasy” from Divine Revelation.

A tree-planting ceremony attended by Pope Francis at the outset of the synod immediately became controversial because of pagan rituals it incorporated and pagan effigies that were gifted to the pontiff. The very same idols, variously described as “Our Lady of the Amazon” and the “Pachamama” fertility goddess — the latter by the pope himself — showed up at a church not far from the Vatican, causing further controversy and comment. Then, on Oct. 21, a young Austrian entered the church, removed the effigies, and threw them into the Tiber River. His acts were recorded on video, which was then widely circulated on social media. Identifying himself as “Alexander,” the English-speaking Austrian man said in a later video that he was “very upset” when he saw people bowing before the idols at the church in Rome. He explained: “There are some laymen, and we stand up because we don’t want things like that happening in the Catholic Church.” After the incident, Pope Francis apologized to the synod organizers and even suggested that the idols would be returned to the church.

Author Valente told Religion News Service that the pope’s interview is a riposte to “to all the closed- and narrow-minded points of view that we witnessed” during the synod. He said “certain powerful ecclesiastical circles” in the United States show hostility toward the pope.

Pope Francis advocated for a revival of a missionary spirit in the Church. He said that nowadays, Catholics must “bear in mind that the revealed message is not identified with a particular culture,” the pope said. “And when meeting new cultures, or cultures that have not accepted the Christian proclamation, we must try not to impose a determined cultural form together with the evangelical proposition.” Proselytism “is always violent by nature,” he said, and “cuts out Christ” and grace from the Holy Spirit. Without aid from the Holy Spirit, mission work is but “a religious, or perhaps an ideological conquest, perhaps carried out even with good intentions.”

Being moved by the Holy Spirit, said the pope, produces an “attraction” for those who want to follow the path of missionaries. Missionaries should work in “facilitating, making easy, without placing obstacles to Jesus’s desire to embrace everyone, to heal everyone, to save everyone.” They should not be selective, impose “pastoral tariffs,” or be guards who control “who has the right to enter.”