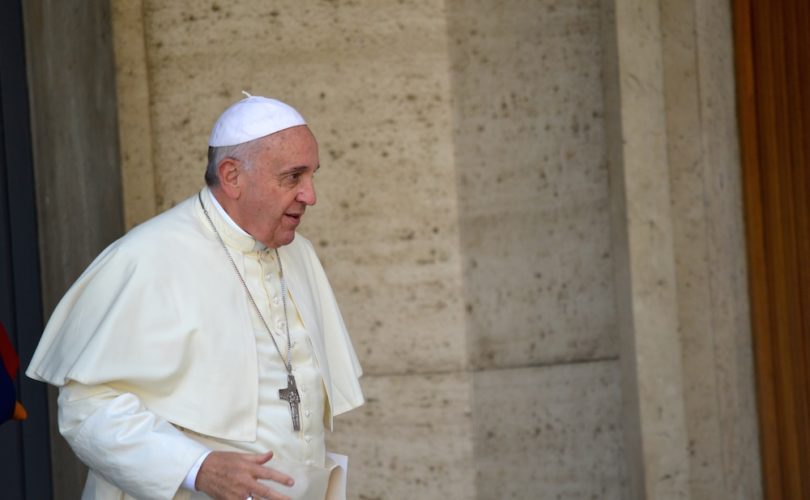 ROME – In an interview released on the opening of the Synod on the Family, Pope Francis distanced himself from “very conservative” bishops, adding however that he enjoys “debating” them as long as they are “intellectually well-formed.”

In an interview with the pope, published October 5, reporter Joaquín Morales Solá at Argentina’s La Nacion newspaper asked if he was “worried” about the recent book by five cardinals opposing Kasper’s proposal, titled Remaining in the Truth of Christ: Marriage and Communion in the Catholic Church. Morales Solá said to the pope that the book is “critical of your positions.”

Francis “doesn’t answer” the question directly, according to Morales Solá, but says, “Everyone has something to contribute. I even enjoy debating with the very conservative, but intellectually well-formed bishops.”

(See excerpts below of the La Nacion interview, translated by LifeSiteNews.)

At Wednesday’s press briefing, LifeSiteNews asked Vatican officials for a clarification on the pope’s remarks apparently separating himself from the “very conservative” outlook on the faith of prelates like Cardinal Raymond Burke, a co-author of the book, and Cardinal George Pell, who wrote the foreword to another book criticizing Kasper’s proposal and who has warned it would result in a sociological disaster.

Father Federico Lombardi, director of the Holy See Press Office, replied, “I have no knowledge of this interview; I know absolutely nothing about it. We didn’t publish it, therefore I have nothing to clarify, because, it is hardly known to me.” Father Thomas Rosica, English-language spokesman for the Synod, repeated that prior to LifeSiteNews’ question, the Vatican’s press office had no knowledge of the interview or its contents.

In the interview the pope said that in addition to problem of divorced Catholics, which has been the prominent discussion, he is equally concerned with “the new habits of today’s youth.”

“Young people who are not getting married at all.  It is a culture feature of our times,” he said. “So many young people prefer to live together without marrying.  What should the Church do? Expel them from its breast? Or, instead, approach them, embrace them and try to bring them the word of God? I'm with the latter position.”

“The world has changed and the Church cannot lock itself into alleged interpretations of dogma,” he continued. “We have to approach social conflicts, new and old, and try to give a hand of comfort, not to stigmatize and not to just impugn.”

Morales Solá’s interview with the pope was interspersed with his own commentary on Pope Francis’ papacy. According to the reporter, Pope Francis has “changed the agenda of the Church” and “very quickly radically changed [its] focus.” The pope’s new agenda, he said, has at times “pitted conservatives against reformers.”

“Cardinals and bishops know that behind the friendly and warm smile is the iron will of the old Jesuit. The power of the Vatican bureaucracy is not discussed in his presence,” he wrote.

The Extraordinary Synod of Bishops, which runs from October 5-19, became a flashpoint of controversy in the months leading up to it as self-styled “reformers” agitated for change in Church practice, and in some cases, outright revision of doctrine. Critics of these “reformers” have met the challenge with vigorous defenses of Catholic teaching on marriage and family.

On Tuesday, the Holy See Press Office told reporters that some Synod participants proposed moving away from strong language in moral discourse, such as the Catechism of the Catholic Church’s description of homosexual behaviour as “intrinsically disordered,” or the common description of cohabitation as “living in sin.”

LifeSiteNews' Editor-in-Chief John-Henry Westen is in Rome for the Extraordinary Synod on the Family. For more LifeSiteNews coverage, visit our feature page.

What does the Pope expect of synod which is currently opening? It should be noted at the outset, that the Synod is a gathering of bishops from around the world that has an advisory character and that its main purpose is to advise the pope on a given topic.

There are now in Rome about 200 cardinals and bishops from around the world who will be addressing the issue of the family. “Do not expect any final positions next week,” says the Pope, ironically. “This will be a long synod, which will probably last a year.  I am only giving it the initial push,” he adds.

Are you worried about the book co-authored by five cardinals, one of whom is very prominent, which is critical of your positions? He doesn’t answer. “Everyone has something to contribute. I even enjoy debating with the very conservative, but intellectually well formed bishops,” he says.

The pope has let go of the reins of the synod. “I was the rapporteur of the 2001 synod and there was a cardinal who told us what should be discussed and what should not. That will not happen now. I even gave the bishops my power to elect committee chairmen.  They will elect them, just like they will elect the secretaries and rapporteurs.”

“Of course – he stresses – that's the synodal practice that I like.  All should speak their mind freely. Freedom is always very important.  Another thing is the government of the Church. That is in my hands, after I receive the necessary advice,” he emphasizes. Francis is a good pope, but not a pope that will be governed by others. This is very clear in his style of political and religious management.

This style is also seen in its relationship with Argentinian Church. He gave them full freedom to fix their positions on public issues. However, he unequivocally reserves his right to the appointment of bishops. The Conference of Bishops and the Nunciature often send the lists of candidates for the appointment of new bishops. Then the Pope must choose one of these candidates. Francis has already returned some of these lists because he did not like any of the candidates.

What conclusions would he like to draw from the synod?

“The family is such an important issues, so costly for society and for the Church,” he says, adding, “There has been much emphasis on the issue of divorced people, and this is an aspect that undoubtedly will be debated. But, for me, an equally important problem is the new current, the new habits of today’s youth.  Young people who are not getting married at all.  It is a culture feature of our times.  So many young people prefer to live together without marrying.  What should the Church do? Expel them from its breast? Or, instead, approach them, embrace them and try to bring them the word of God? I'm with the latter position,” he says.

“The world has changed and the Church cannot lock itself into alleged interpretations of dogma. We have to approach social conflicts, new and old, and try to give a hand of comfort, not to stigmatize and not to just impugn,” he says.