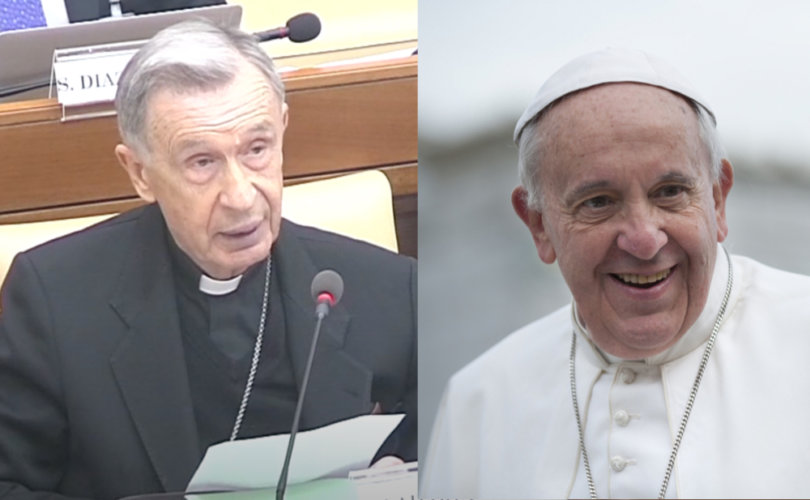 VATICAN CITY (LifeSiteNews) – Pope Francis today announced a re-ordering of the Congregation for the Doctrine of the Faith (CDF), splitting the doctrinal and disciplinary elements into two separate parts amid rumors that he is altering the Congregation to become more LGBT friendly.

As predicted by MessainLatino, the motu proprio Fidem servare, released February 14 and signed by Pope Francis on February 11, divides the CDF into two sections – doctrinal and disciplinary – which will each have a secretary assigned to them.

The CDF’s prefect – currently 77-year-old Cardinal Luis Ladaria Ferrer – will thus be assisted by the two secretaries in the overall governance of the Congregation. Each section’s secretary will assist the Prefect “with the collaboration of the Under-Secretary and the respective Heads of Office.”

The alterations were explained by Pope Francis as based on “the experience gained by the Congregation over this time in various areas of work, and the need to give it an approach more suited to the fulfillment of the functions proper to it.”

“Keeping the faith is the main task, as well as the ultimate criterion to be followed in the life of the Church,” Francis declared in his opening line, defending his changes.

But the dissident National Catholic Reporter described the changes as “the most significant organizational changes to the office in over 30 years.”

Going forward, the CDF’s “Doctrinal Section, through the Doctrinal Office” – which covers the “promotion and protection of the doctrine of faith and morals” – will have care of “studies” aimed at increasing the “understanding and transmission of the faith at the service of evangelization,” particularly with regard to the “questions posed by the progress of the sciences and the development of society.”

The Doctrinal Section will also deal with examining Curial documents, as well as other writings that “appear problematic for the correct faith,” being told to “encourage dialogue” with the authors in order to propose “suitable remedies.”

The Doctrinal Section of the CDF is also directed to study “questions relating to the Personal Ordinariates instituted by the Apostolic Constitution Anglicanorum Coetibus,” namely, the Anglican Ordinariates.

The office that examines marriages, and their potential dissolution, is now moved to the Doctrinal Section.

The newly divided Disciplinary Section attends to “crimes reserved to the Congregation and dealt with by it through the jurisdiction of the Supreme Apostolic Tribunal established there.”

The Section will deal with “grave” crimes, such as sexual abuse cases, and is to “prepare and elaborate the procedures foreseen by canonical norms so that the Congregation, in its various instances (Prefect, Secretary, Promoter of Justice, Congress, Ordinary Session, College for the examination of appeals in matters of delicta graviora), may promote a correct administration of justice.”

Consequently, Fidem servare directs the Section to promote “appropriate formation initiatives” to be offered to local bishops and canon law practitioners “in order to foster a correct understanding and application of the canonical norms relating to its own sphere of competence.”

The motu proprio came into force with its publication in L’Osservatore Romano, and afterward is to be published in the Acta Apostolicae Sedis, the official record of the Vatican’s administrative and doctrinal actions and pronouncements.

“What has been decided by this Apostolic Letter in the form of a Motu Proprio, I order to be firm and stable in force, notwithstanding anything to the contrary, even if worthy of special mention,” Francis closed.

While no appointments to the new roles within the now-divided CDF have been publicly announced, MessainLatino described the motu proprio as “dismantling” the CDF, warning that the appointments “promise to be very negative.” The blog suggested that the Doctrinal Office’s Secretary would be Monsignor Armando Matteo, an under-secretary at the CDF and “highly esteemed by Pope Francis.”

The re-ordering of the Curia comes in light of concerns that Pope Francis is conducting a fundamental shift within the CDF in order to make the Congregation more open to LGBT ideology.

Since the CDF’s March 2021 note issuing a ban on blessings homosexual relationships, and calling them “illicit,” Pope Francis has made numerous public statements praising and supporting both advocates of LGBT ideology and same-sex civil unions.

He recently fired the CDF’s Secretary, the second-in-command, Archbishop Giacomo Morandi, the driving force behind the CDF’s 2021 ban on homosexual blessings. Vatican observers believe Morandi’s firing to have been almost a punishment for this document, as well as being linked to Morandi’s opposition to the Pope’s restrictions on the Latin Mass contained in Traditionis custodes.

Morandi’s removal from the Vatican is believed to be the start of a Curial-wide reform in line with Pope Francis’ wishes, with strong suggestions that the prominently pro-LGBT Archbishop Charles Scicluna of Malta could replace Cardinal Ladaria as the CDF’s Prefect by the summer. Scicluna is already an adjunct secretary at the CDF.

As LifeSiteNews has noted already, the Catholic Church in Malta has strayed from authentic Catholic teaching under Archbishops Scicluna’s leadership, with Scicluna lending his personal support to homosexual civil unions as a “service to the dignity of these people.” Scicluna also oversaw the Maltese bishops approving Holy Communion for divorced and civilly remarried Catholics if they are “at peace with God.”

Should such an appointment take place, it would effect a fundamental shift in the CDF, with its new governance being strongly opposed to the stance taken by Ladaria and Morandi on LGBT issues.