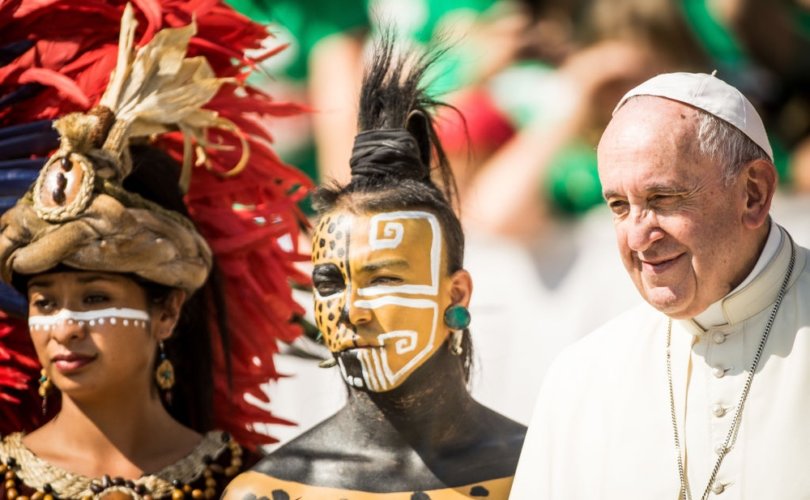 PETITION: Catholics, call on the Vatican to affirm all salvation comes through Jesus! Sign the petition here.

According to a statement issued on Friday, “Querida Amazonia” [Dear Amazonia], the Pope’s post-apostolic exhortation on the Special Assembly of the Synod of Bishops on the Pan-Amazonian region, will be presented at a 1pm press conference at the Holy See Press Office.

The release of Pope Francis’s apostolic exhortation promises to attract considerable attention and potentially serious controversy. At stake in the document is the discipline of priestly celibacy in the Latin Church, the introduction of “official ministries” for women, and the acceptance of pagan elements of Amazonian culture into the Church’s prayer and liturgy.

All of these points were raised both in the preparatory document for the Amazon Synod and during the October assembly.

Presenting the document will be Cardinal Lorenzo Baldisseri, Secretary General of the Synod of Bishops; Cardinal Michael Czerny, SJ, Undersecretary for the Migrants and Refugee section of the Vatican dicastery for integral human development; Jesuit Father Adelson Araújo dos Santos, who teaches theology and spirituality at the Pontifical Gregorian University in Rome; Sr. Augusta de Oliveira, SMR, Vicar General of the Servants of Mary Reparatrix; and Professor Carlos Nobre, a 2007 Nobel Prize winner and member of the Scientific Environmental Commission and National Council of Scientific and Technological Development.

Also contributing via video-message will be Bishop David Martínez de Aguirre Guinea, OP, of Puerto Maldonado, who served as Special Secretary for the Pan-Amazon Synod.

As LifeSite reported earlier this week, various and potentially conflicting draft texts of the apostolic exhortation have recently been circulating in the Vatican and among several bishops conferences.

Italian historian Roberto de Mattei said multiple sources confirmed that neither the Vatican Secretary of State nor the Congregation for the Doctrine of the Faith were given a partial draft of the apostolic exhortation that Brazilian Cardinal Cláudio Hummes, General Relator of the October 6-27 Amazon Synod, sent to at least several bishops conferences in mid-January.

The partial draft circulated by the Brazilian cardinal reproduced verbatim paragraph 111 of the Amazon Synod’s final document. In paragraph 111, the synod fathers proposed ordaining married men in “the most remote areas of the Amazon region.”

De Mattei, president of the Rome-based Lepanto Foundation and director of Corrispondenza Romana, argued that the positive inclusion of this passage in the apostolic exhortation (whether in the main body or a footnote) would effectively “open the door” for the German Bishops, and others, to create a married clergy. “There is no reason to prohibit in other regions of the world what will be permitted in some parts of the Amazon,” he wrote.

He said sources also confirmed that “the document approved by the Congregation for the Faith does not contain this passage” and is “Catholic.”

Only time will tell.