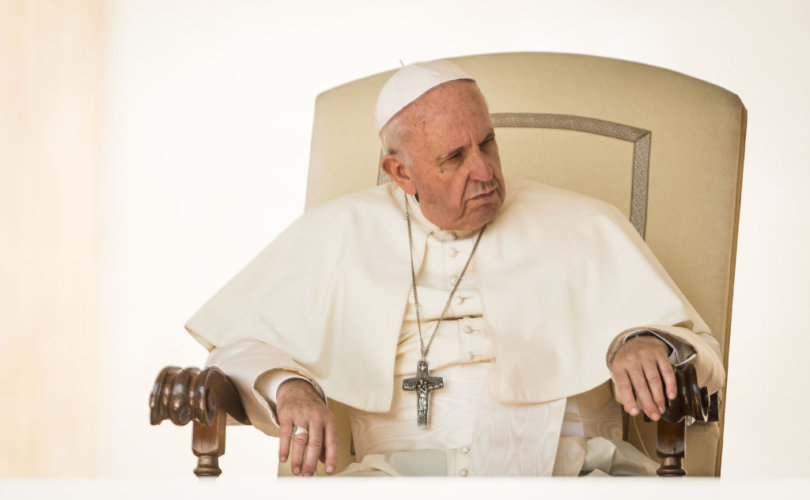 April 2, 2020 (LifeSiteNews) – In a surprise move, Pope Francis has dropped the historic and essential title “Vicar of Christ” from the 2020 Pontifical Yearbook, the Holy See’s annual directory, relegating the title to a footnote, calling it a “historical title.”

While previous yearbooks listed the title “Vicar of Christ” and the name of the reigning Pope under that title, this year’s annual directory simply lists the name “Jorge Mario Bergoglio,” the name of the man who became Pope Francis in 2013. A photo of this year’s yearbook was published by Rome-based journalist Marco Tosatti.

Cardinal Gerhard Müller, former prefect of the Congregation for the Doctrine of the Faith, called the change “theological barbarism.”

As the German Rome Correspondent, Guido Horst, reported today for the newspaper Die Tagespost, this new entry has astonished well-informed Vatican experts. He writes that this year's Annuario Pontificio has “banned” the Pope's title 'Vicar of Christ,' making it a “historical title” that now belongs to a footnote.

The Annuario Pontificio is published every year. It updates statistical data concerning the Catholic Church. Usually, the presentation of the members of the Church's hierarchy – College of Cardinals, bishops of the world and the Vatican's dicasteries – starts with the Roman Pontiff, under the title “Vicar of Jesus Christ” (“Vicario di Gesù Cristo”). Then follow the additional titles of the Pope, all of which carry a “different or even no dogmatic significance” as does the first title, according to Horst. These are: Successor of the Prince of the Apostles, Supreme Pontiff of the Universal Church, Primate of Italy, Archbishop and Metropolitan of the Roman province, Sovereign of the State of the Vatican City, and Servant of the Servants of God.

The title “Vicar of Jesus Christ,” however, “stems from Holy Scripture, in which Jesus has granted St. Peter the power of the keys in the Church,” Horst explains.

After these additional titles, there usually then would come the name of the current pontiff, a short biography of him, as well as the dates of his election and inauguration.

However, the new entry about the Pope starts now – instead of the title “Vicar of Jesus Christ” – with the following title: “Jorge Mario Bergoglio.” This title is followed by a short biography and the dates of his election and inauguration. Finally – and this after a line indicating that the “footnotes” (in the words of Guido Horst) are now coming – there come, under the subtitle “historical titles”: Vicar of Jesus Christ, Successor of the Prince of the Apostles, Supreme Pontiff of the Universal Church, Primate of Italy, Archbishop and Metropolitan of the Roman province, Sovereign of the State of the Vatican City, and Servant of the Servants of God.

According to Horst, such a change of the presentation of the Roman Pontiff in the Annuario Pontificio “could only have happened upon request by Francis himself.”

In comments to the Tagespost, Cardinal Gerhard Müller points out that in the new presentations of the titles of the Pope, there are mixed together titles with dogmatic significance with those that do not bear such weight and who have a historical background (such as “Sovereign of the State of the Vatican City”).

“No Pope or Ecumenical Council,” the German prelate continued, “could, with reference to their highest authority over the Church, do away with the primacy, the episcopacy, or the Sacraments, or to re-interpret them in their essence.”

A commentator quoted by Guido Horst noted that the change in the yearbook denotes a “defective understanding of the office,” pointing out that important titles such as “Successor of the Prince of the Apostles” have also been downgraded as mere historical titles.

Professor Armin Schwibach, the Rome Correspondent for the Austrian website Kath.net, commented on Twitter: “It seems that they continue to dismantle everything.”

In 2006, Pope Benedict made a change to the usual presentation of the Roman Pontiff in the Annuario Pontificio when removing altogether the papal title “Patriarch of the West.” At the time, this decision was interpreted as an act of “evidently hoping to eliminate one possible obstacle to ecumenical progress with the Orthodox world.”