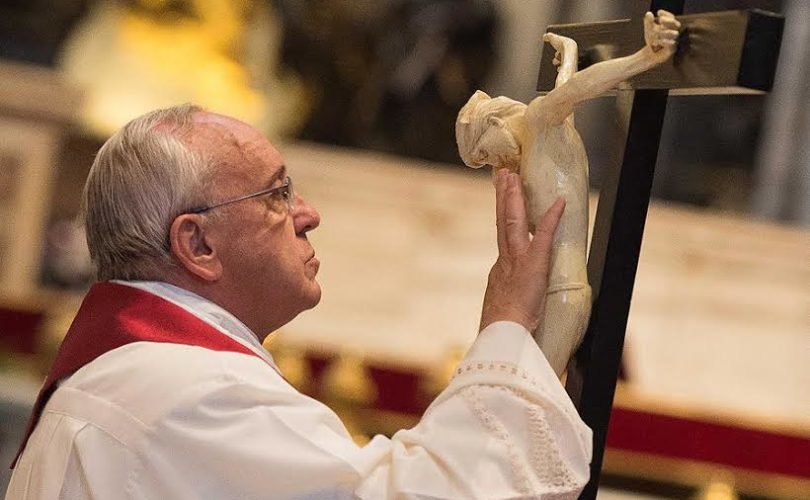 ROME, September 1, 2015 (LifeSiteNews) — In an announcement today, Pope Francis said that he is enacting an Extraordinary Jubilee of Mercy from December 8, 2015 through November 2016. As part of the Jubilee, the pope has allowed priests to forgive the sin of abortion, which St. John Paul II taught in Evangelium Vitae (paragraph 58) is “murder.”

The statement marks the most extensive remarks on abortion that Pope Francis has made during his pontificate. Rather than downplaying the seriousness of abortion, as some media contend, in the statement the pope encourages the millions of women who have aborted their children to go to confession and seek God’s forgiveness.

In the Catechism, the Church calls abortion a “criminal” practice, and imposes the penalty of excommunication on those who do it — essentially, removing those who commit abortions from the Church. In the past, typically re-entry into the Church for those who have separated themselves from it by excommunication can only be undertaken by a bishop. However in much of North America priests have already been given standing permission by their bishops to forgive abortion.

Philadelphia Archbishop Charles Chaput explained in an email sent to LifeSiteNews today, “For many years now, parish priests have been given permission to absolve the sin of abortion here in the Archdiocese of Philadelphia.” The Philadelphia archbishop, who will play host to Pope Francis during the pontiff’s visit later this month added, “But the practice has not been common in various other regions of the world.”

“This action in no way diminishes the moral gravity of abortion,” concluded Chaput. “What it does do is make access to sacramental forgiveness easier for anyone who seeks it with a truly penitent heart.”

The pope declared that all priests may forgive the sin of abortion for “those who have procured it and who with contrite heart, seek forgiveness for it.'”

The pope says in his letter that abortion is a “tragedy” wherein “extreme harm” takes place, and calls it “profoundly unjust.”  He admits however, as does the pro-life movement, that it is an “agonizing and painful decision” and many women “believe that they have no other option.”

In order to be forgiven by God of such a serious offence, the pope says the one who has procured the abortion must be made aware of the “gravity of the sin committed” and be truly repentant. They must come, says Francis, with a “contrite heart, seek forgiveness for” the abortion and hoping for “reconciliation with the Father.”

The full statement from the Pope on the matter of abortion follows:

One of the serious problems of our time is clearly the changed relationship with respect to life. A widespread and insensitive mentality has led to the loss of the proper personal and social sensitivity to welcome new life. The tragedy of abortion is experienced by some with a superficial awareness, as if not realizing the extreme harm that such an act entails. Many others, on the other hand, although experiencing this moment as a defeat, believe they they have no other option. I think in particular of all the women who have resorted to abortion. I am well aware of the pressure that has led them to this decision. I know that it is an existential and moral ordeal. I have met so many women who bear in their heart the scar of this agonizing and painful decision. What has happened is profoundly unjust; yet only understanding the truth of it can enable one not to lose hope. The forgiveness of God cannot be denied to one who has repented, especially when that person approaches the Sacrament of Confession with a sincere heart in order to obtain reconciliation with the Father. For this reason too, I have decided, notwithstanding anything to the contrary, to concede to all priests for the Jubilee Year the discretion to absolve of the sin of abortion those who have procured itand who, with contrite heart, seek forgiveness for it. May priests fulfil this great task by expressing words of genuine welcome combined with a reflection that explains the gravity of the sin committed, besides indicating a path of authentic conversion by which to obtain the true and generous forgiveness of the Father who renews all with his presence.