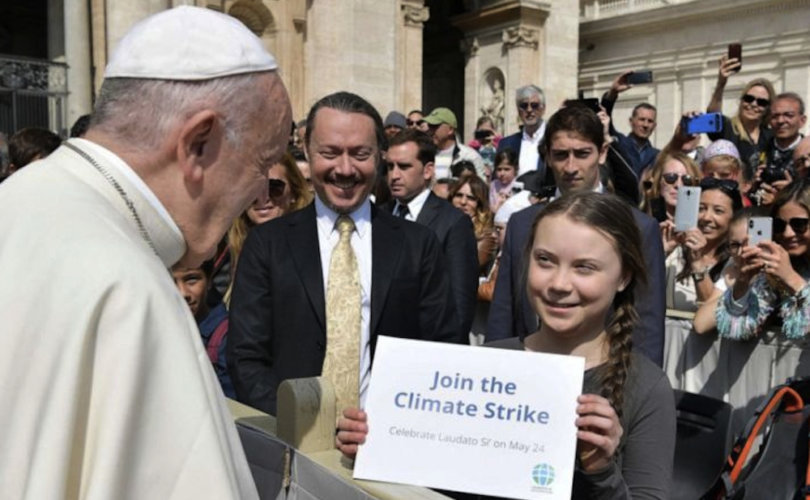 “Continue, continue,” Francis told her, according to the Associated Press. “Go on, go ahead.”

“Thank you for standing up for the climate, for speaking the truth,” Thunberg told Francis, the report said. “It means a lot.”

Thunberg was seated in the VIP section for the audience, and when Francis approached her toward the end of the audience, she displayed her sign that read: “Join the climate strike.”

Thunberg has become famous for organizing climate change protests for school children and her activism has gained increasing media attention. A CBS News report pulling from the AP article features a photo of a smiling Francis and a beaming Thunberg as she holds her climate strike sign up for him at the audience in St. Peter’s Square.

Thunberg’s sign was promoting an upcoming international school strike scheduled for late May and it paid homage to Francis’ eco encyclical, stating, “Celebrate Laudato Si’ on May 24,” which happens to be the anniversary of the document’s 2015 release.

Her school strikes have involved hundreds of thousands of students in more than 100 countries, the CBS report said, with children leaving their classes to protest perceived lack of action by government on the climate issue.

Thunberg was in Italy last week to lead a school strike in Rome on Friday and address the Italian Senate.

“I know it’s a holiday, but since the climate crisis doesn’t go on vacation nor will we,”  Thunberg said April 14 on Instagram regarding the climate change protest taking place on Good Friday.

One day earlier in Strasbourg, France, she told European Union leaders at the European Parliament that they should “panic” about climate change.

Thunberg was nominated for the Nobel Peace Prize in March, and in April she was named to Time Magazine's world's 100 most influential people list.

Thunberg released a video from Rome shortly after meeting the pope, saying “he was very kind.”

“He told us that we should continue, like we do now,” she said. And he supports the school strike, the big school strike that is happening May 24, which also happened to be on the anniversary of Laudato Si.”

“And so I urge you to join the climate strike,” she said. “And we will take it to the streets and we will continue to fight for our future until the politicians do something.”

The video, along with Thunberg’s climate strike sign, contained the logo for “Laudato Si’ Generation,” a youth division of the Global Catholic Climate Movement, a network of Catholic organizations advocating action on climate change.

Francis has made the environment and the controversial and contested issue of climate change a priority during his pontificate, appearing in a climate change movie with celebrity activists and otherwise speaking about it numerous times.

“Thank you so much for what you are doing,” Thunberg's father, Svante Thunberg, told the pope when Francis met his daughter last week. “It means everything. Everything.”

Climate activists overwhelmingly dismiss and often disparage any questioning of climate science — claiming it is settled. However, other scientists continue to contest it, and some even say data has been skewed to support climate activists’ alarming claims of so-called man-made climate change.

Pro-life and family advocates and others continually express concern over the climate activism movement, as it’s often aligned with pro-abortion and population control forces. Others criticize much of climate activism as being about garnering government grants and exerting statist power.