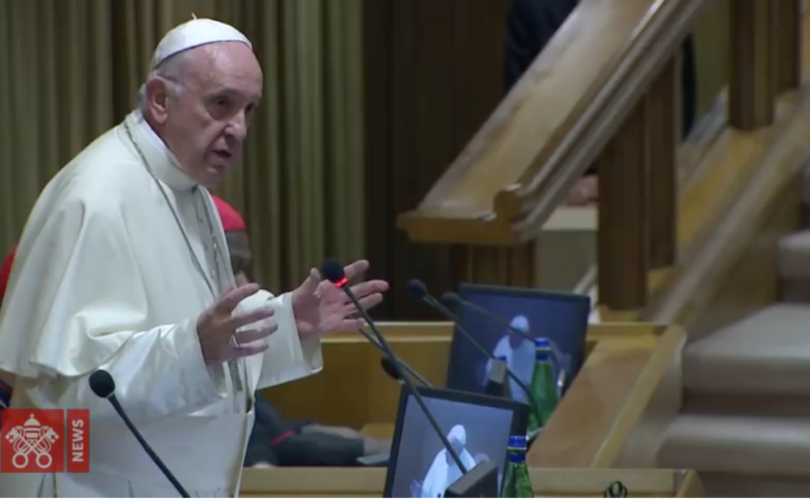 ROME, October 29, 2018 (LifeSiteNews) —  The Great Accuser took center stage at the climax of the Vatican Youth Synod, with Pope Francis saying it is time to defend the Church against his constant attacks.

In concluding remarks to bishops, young people and other synod participants gathered in the synod hall on Saturday, the Pope said the “Great Accuser” is persecuting the Church through “constant accusations meant to sully” her.

“Our Mother is Holy, but we children are sinners. We are all sinners. Let us not forget that expression of the Fathers, the casta meretrix, the Holy Church, the Holy Mother with sinful children,” he said.

St. Ambrose, the fourth-century Father of the Church who baptized St. Augustine, first used the expression “casta meretrix” [chaste harlot] in his commentary on St. Luke’s Gospel, to apply to the Church the symbolism of Rahab, the prostitute of Jericho who sheltered and saved fugitive Israelites in her home (Joshua 2:1-24).

Cardinal Giacomo Biffi, a scholar of St. Ambrose who preached Pope Benedict XVI’s 2007 Lenten retreat and wrote a book on the Ambrosian saying, explains the meaning of the startling expression in this way:

The expression “casta meretrix,” far from being a reference to sinfulness and guilt, this phrase actually refers to the holiness of the Church; and this reference is made not merely by means of the adjective, “casta,” but through the noun. Furthermore, this holiness consists as much in her clear and unswerving loyalty to Christ her Bridegroom (“casta”) as in the desire of the Church to reach all in order to bring them to salvation (‘meretrix’).

In his remarks on Saturday, Pope Francis continued: “Because of our sins, the Great Accuser always takes advantage of them, as the first chapter of Job says: he prowls around, he prowls around the Earth looking for someone to accuse. At this time, he is strongly accusing us, and this accusation also becomes persecution.”

He therefore appealed for prayer and penance to defend the Church from the Great Accuser’s “constant accusations,” which he said are meant “to sully” her.

“The Church must not be sullied; the children yes, we are all sullied, but not the Mother,” he said. “That is why it is time to defend the Mother.”

The Pope went on: “The Mother defends herself from the Great Accuser with prayer and penance. That is why I asked, in this month that ends in a few days, to pray the Rosary, to pray Saint Michael the Archangel, to pray to Our Lady that she may always cover Mother Church.”

“Let us continue to do so,” he said. “It is a difficult time, because the Accuser who is attacking us attacks the Mother, but you don’t touch the Mother.”

While Pope Francis’ call for the children of the Church to defend their Mother from her enemies is commendable, and his invitation to pray the Rosary has been taken up by many, his words have left some observers wondering: Who exactly does he believe the Great Accuser is? The Devil, to be sure, but who are his agents?

Pope Francis has not specifically named anyone, but key figures close to him have.

Following the Pope’s remarks on Saturday, papal biographer, Austen Ivereigh, made it quite clear who he thinks is at the top of the list. In a series of tweets, he said:

Pope ends saying something important here, that the Great Accuser attacks the mother (the Church) through us. Devil can do nothing without human agency. A person possessed by the spirit of accusation does the devil’s work for him (convinced, of course, that they’re doing good). https://t.co/Tt1snWKjij

This is about the spirit involved, not whether something is true or false. The Great Accuser can use truths, half-truths or lies, or (usually) a mixture of them, twisted to suit a case. Viganò’s accusations (if that’s what you mean) are an obvious example. https://t.co/wiENtubH7t

Pope Francis’ comments also have some wondering: If the Pope is talking about people bringing substantiated charges against pederast priests, or exposing a homosexual culture in the clergy or episcopate, doesn’t that ultimately help rather than harm Holy Mother Church?

As one high-ranking prelate told LifeSite: “The Great Accuser is the Devil. If people are bringing forward grievously sinful acts that have been committed against them, that’s not sullying the Church. It’s asking the Church to do justice and to rectify the situation.”