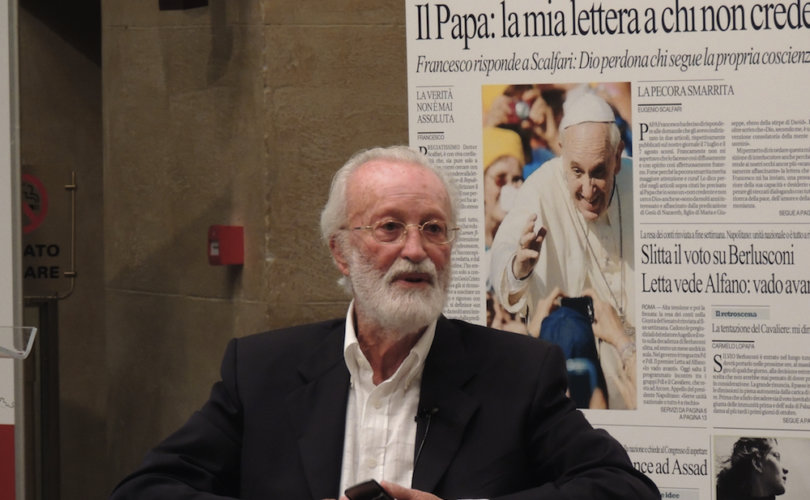 ROME, January 21, 2020 (LifeSiteNews) — Eugenio Scalfari’s latest “interview” with Pope Francis, which came out at the height of the recent Benedict XVI-Cardinal Sarah book controversy, was a “loose reconstruction” of the Italian journalist’s recollection of the meeting, the Vatican has said.

In the January 16 “interview,” published in the left-leaning Italian daily La Repubblica, 95-year-old Scalfari, who is regarded as Francis’s preferred interviewer, portrayed “From the Depths of Our Hearts” as an opposition campaign launched by Cardinal Robert Sarah against the current pontificate. He also claimed that, for Francis, once Benedict had shown solidarity with him by reportedly denying co-authorship of the book, “the issue with Ratzinger was closed.”

La Repubblica featured its co-founder’s latest “interview” with the pontiff on page 2, with the headline: “Pope Francis: Case Closed with Ratzinger. Scalfari in conversation with Bergoglio after the controversy on priestly celibacy.”

Scalfari begins the piece by noting that “a few days before” Thursday, January 16, he set up his meeting with Francis by phone and agreed to meet him at his Santa Marta residence in the Vatican. Scalfari also reminds his readers from the outset of his “very intense relationship” with the pontiff.

He notes further on, that the two had agreed to resume their “face to face” meetings several weeks prior. “In the meantime,” he adds, “the Pope who resigned … had received a request from Cardinal Sarah for a text on priestly celibacy.”

Scalfari then offers his own account of the controversy surrounding the Benedict XVI-Cardinal Sarah book on priestly celibacy, writing:

Sarah thought he opposed the positions of Francis and had hoped that Ratzinger would associate himself with his own positions. Benedict had provided a text and on the basis of this Sarah sent to press a co-authored book with very polemical content. Almost all the major Italian newspapers prominently highlighted this news which, if it had been true, would have produced a considerable crisis by gathering, under the banners of a cardinal and Pope who had resigned but was still fully active, a number of bishops more or less discontent with the current pontificate, and thus putting Pope Francis in considerable difficulty.

He continues: “This being the situation, Ratzinger had made it known that he had not sided with Sarah at all nor had he ever authorized a co-authored book with him.”

“Benedict therefore showed Francis all his solidarity,” Scalfari, a self-professed atheist, writes. “Our Pope [Francis] did not take the attempt of a group of cardinals backing Sarah seriously at all, and he accepted Ratzinger’s friendly and even fraternal offer the day before our meeting.”

“As for me,” the Italian journalist continues, “aware of Sarah’s attempt, I asked at the beginning of our meeting what his inner reaction was to the existence of a group in opposition to his pontificate.”

“The answer,” Scalfari then claims without quoting the Pope, “was that there is always someone opposed in an organization that embraces hundreds of millions of people around the world. The issue with Ratzinger was therefore closed and the small or great opposition that still remains standing ought to be considered a fairly normal phenomenon in such structures.”

“Thus began our discussion, with an issue considered to be of no interest,” Scalfari concludes before moving on to other matters which he reported as direct quotes.

The 95-year-old Italian journalist does not record his interviews.

In comments to LifeSite on January 16, Matteo Bruni, Vatican spokesman, confirmed that Scalfari’s meeting took place, but added that “the content of the conversation, as described by the journalist, is a loose reconstruction of what he recollects.”

The timing of the latest Scalfari “interview” is significant. Reviewing the rollout of Cardinal Sarah’s new book with Benedict XVI:

Observers see the timing of the latest “interview” as a further instance of Scalfari being used as an unofficial mouthpiece, or a kind of parallel press office for Pope Francis during media controversy related to this pontificate.

Now, after three years, we have to admit — though the misconduct remains with Scalfari — that this is a modus operandi of Pope Francis. As he has shown in recent weeks, first with the meeting with the Lutherans in Lund and then now with the popular movements in the Vatican, he has made it a habit to call or meet Scalfari on occasions of important meetings of his pontificate to explain the meaning of the event and its global scope, well aware that the founder of La Repubblica will report it in his newspaper.

As Edward Pentin explained at the time: “Before the Oct. 31 Lund meeting commemorating the Reformation, Francis called Scalfari to allegedly say that the brotherhood of all religions and the unity of all Christian churches is the goal as all believe in one God.”

What is more disconcerting, Cascioli said, is that these interviews are creating a magisterium that is “affirmed” by the mainstream press, confusing and disorienting the faithful, and providing fodder for those who seek to destroy the Catholic Church.

On the eve of Holy Thursday, 2018, Scalfari claimed the Pope had told him that hell does not exist, and that the souls of those who do not go to heaven are annihilated (an implicit denial of the immortality of the soul). More recently, in November 2019, Scalfari went so far as to claim that Francis denied the divinity of Jesus Christ.

On January 16, LifeSite asked Vatican spokesman, Matteo Bruni, if he could comment on why Francis continues to grant interviews to Eugenio Scalfari, when he has claimed that the Pope espouses what amounts to heresy. On this point, Bruni offered no reply.

Many consider the swirl of controversy surrounding the rollout of the new book a storm in a teacup and a distraction from that really matters, i.e. the book’s content.

On Friday, January 17 (one day after the latest Scalfari “interview”), Cardinal Robert Sarah settled the controversy, sending out three tweets saying he had met personally with Benedict XVI, there was “not one misunderstanding” between them, and encouraged people to read the book.

Editor’s note: “From the Depths of Our Hearts: Priesthood, Celibacy, and the Crisis of the Catholic Church” may be pre-ordered here.