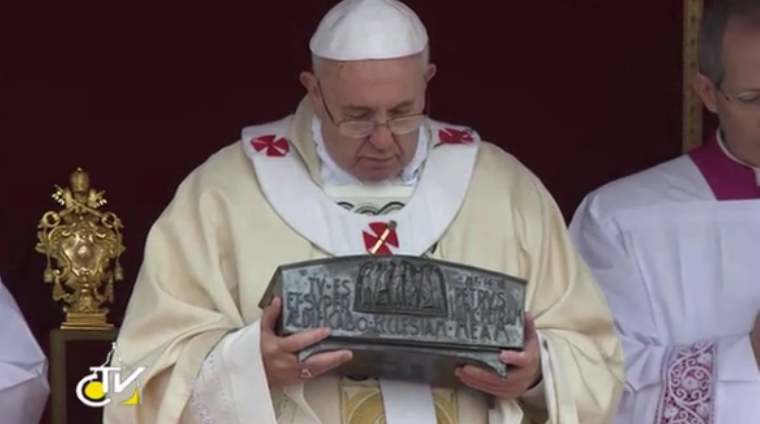 ROME, July 3, 2019 (LifeSiteNews) — In an unexpected and what some in Rome are viewing as an ominous gesture, Pope Francis has given away relics of St. Peter the Apostle to an Orthodox patriarch.

Following a solemn Mass on June 29, the liturgical feast of the Apostles Sts. Peter and Paul, the Pope gave a delegation representing Orthodox Ecumenical Patriarch Bartholomew of Constantinople a bronze reliquary containing nine bone fragments of the first Pope.

The Orthodox Church, while having a valid priesthood and sacraments, is not in full communion with Rome, in part because it does not accept papal primacy. Although a mutual withdrawal of excommunication between Rome and Constantinople was issued at the end of the Second Vatican Council by Pope Paul VI and Patriarch Athenagoras, Catholics do not pray for the Orthodox patriarchs in their liturgy nor do the Orthodox pray for the Pope. There is no sacramental intercommunion between the Churches.

The nine bone fragments were among the relics of St. Peter discovered during excavations of the Vatican necropolis begun by Pope Pius XI in 1939. During the excavations, archaeologists discovered a funerary monument with a casket engraved with the Greek words Petros eni, or “Peter is here.”

Following subsequent investigations, Italian archeologist Margherita Guarducci published a paper asserting that she had found the bones of St. Peter near the site identified as his tomb.

In 1968, Pope Paul VI, convinced of the authenticity of the discovery, commissioned a bronze reliquary for nine bone fragments and kept the relics in his private chapel in the Apostolic Palace, where they have remained until now. Each year, on the June 29 liturgical feast of St. Peter and Paul, the relics were displayed in the chapel for the private veneration of the Roman Pontiff.

The other relics of St. Peter still remain in a small niche in the wall under the main altar of St. Peter’s Basilica, in the place they were originally discovered.

The nine bone fragments have been displayed only once for public veneration, on November 24, 2013, when Pope Francis had the reliquary placed next to the altar during the closing Mass for the Year of Faith, opened by Pope Benedict XVI.

Pope Francis removed the reliquary from the private chapel of the popes on June 29, the liturgical feast of the Apostles Sts. Peter and Paul, Patrons of Rome.

Archbishop Job of Telmessos, who headed the official delegation of the Ecumenical Patriarchate of Constantinople, said that after the papal Mass in St. Peter’s Basilica on June 29, Pope Francis invited him to accompany him to the tomb of St. Peter under the main altar.

The archbishop said that after the two prayed together at St. Peter’s tomb, the Pope told him he had a “gift for the Church of Constantinople.” The Pope invited the archbishop to accompany him to the Apostolic Palace. There, in the private chapel of the popes, Francis took the reliquary and gave it to Archbishop Job.

“When we entered the chapel,” the Orthodox archbishop said, “Pope Francis explained to me that Pope Paul VI wanted to keep a part of the relics of St. Peter from the Vatican Basilica in his private chapel.”

Pope Francis told him: “I no longer live in the Apostolic Palace, I never use this chapel, I never [celebrate] Holy Mass here, and we have St. Peter’s relics in the basilica itself, so it will be better if they will be kept in Constantinople.”

“This is my gift to the Church of Constantinople,” the Pope added, as he handed over the relics. “Please take this reliquary and give it to my brother Patriarch Bartholomew.”

Admitting to being somewhat taken aback by the Pope’s decision, Archbishop Job said: “This is an extraordinary and unexpected event that we did not expect. The relics of the Holy Apostle Peter were always kept in Rome where they were the purpose of pilgrimages.”

“The Orthodox Church has never asked for them since they never belonged to the Church of Constantinople,” the archbishop added. “This time, we do not speak of a return of relics to their original place. This time, the relics are being presented as a gift. This prophetic gesture is another huge step on the path to concrete unity.”

But some observers view the gesture as an ominous sign for the Church and for Rome.

“The relics were in the Pope’s private chapel,” a priest noted. “He clearly prefers to make a ‘gesture’ of the relics than to pray before them and receive special graces from his patron, the first Pope.”

“It is an entirely secular way of thinking, and what he reaps — secularization — he will sow for the whole Church, in a way no one expects,” he added.

In comments to LifeSite, another priest in Rome noted how important “locus,” i.e. place, is in Catholic thought, and added that it was the Lord’s will that Peter be martyred in Rome.

The priest pointed out that Christian art and literature have depicted Peter fleeing crucifixion in Rome during Emperor Nero’s persecution. According to a Christian tradition, on a road outside the city, Peter met the risen Jesus. In the Latin translation, Peter asks Jesus, “Quo vadis, Domine?,” to which the risen Lord responds: “Romam eo iterum crucifigi” (“I am going to Rome to be crucified again”). The vision gave Peter the courage to return to the city, where he was martyred by being crucified upside down.

“I strongly suspect this is a sign that St. Peter’s protection will be leaving the Vatican,” an observer in Rome said. “What to watch for next: Francis gives relics of St Paul to Protestants. It would be in the same line as the logic of this move. And it would further remove divine protection, preparing St Peter’s for a devastation not seen since the sack of Rome in the 1500s.”

On the evening of June 29, the relics were transferred from Rome to Constantinople, accompanied by Monsignor Andrea Palmieri, undersecretary of the Pontifical Council for the Promotion of Christian Unity. On June 30, they were exposed for public veneration during a solemn Divine Liturgy celebrated by Patriarch Bartholomew, who described Pope Francis’s decision as a “brave and bold” gesture.

The reliquary is now being kept at the ecumenical patriarchate in Istanbul.

“Often signs are given to us,” one observer commented on Twitter following the news. “St. Peter leaving Rome for the East means only one [thing]: the judgment has been passed upon Rome.