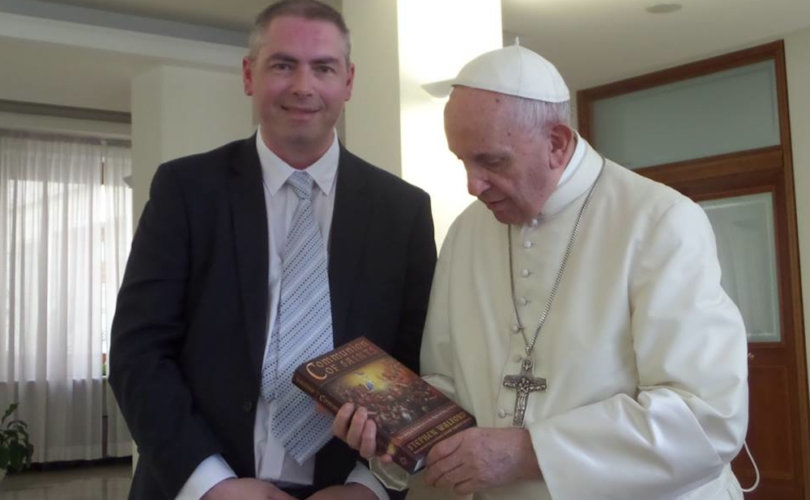 Stephen Walford and his family were granted an unprecedented 45-minute audience with Pope Francis.Facebook

August 31, 2017 (LifeSiteNews) – Pope Francis granted a long, private audience to a relatively unknown Catholic writer who, one month earlier, had denounced three cardinals who have questioned Pope Francis’ apostolic exhortation Amoris Laetitia, claiming that they have incited “satanic abuse” of the pope.

The “dubia cardinals” have never been granted an audience with the pope to discuss their concerns.

Stephen Walford, who appears to work full-time as a piano teacher, and his entire family were given 45 minutes with Francis in which Walford offered gifts and received blessings while his children frolicked and took selfies with the pope.

Such meetings are very rare privileges for lay Catholics and even clergy, who normally are able to meet the pope only as members of large groups in which they may individually exchange a few brief words with the pontiff.

Walford’s article, written for Vatican Insider, is presented as an “open letter” to the three cardinals who have submitted a series of dubia, or questions, to Pope Francis asking him to clarify statements he makes in Amoris Laetitia, which appear to excuse acts of adultery and to allow those living in adulterous unions to receive Holy Communion.

In his “open letter,” Walford lectures the cardinals on Catholic doctrine and scolds them for being “role models” for “traditionalist blogs” that reject the pope’s apparent embrace of Holy Communion for adulterers.

Walford laments that there exists “a growing section of traditionalists and even some conservative Catholics who see you as the standard bearers for the rejection of this papacy,” calling it a “deeply troubling” phenomenon.

“The abuse from many, including those who run websites and Traditionalist blogs aimed at the Holy Father and those who are loyal to him, is nothing short of satanic,” Walford tells the cardinals.

He advises the dubia cardinals to get with the times, claiming that “we must realize that in the real world – where most of us laypeople live and work – the old ways of converting no longer work.”

“We have no choice but to meet people where they are and work from there. We cannot preach hell to people who consider an eternity of heaven as dull and pointless … What I see is a Pope of true Christian realism,” Walford tells the cardinals.

Walford is the author of two books on Catholic topics for Angelico Press and characterizes himself as a “theologian” in his Vatican Insider article, although it is not clear if he has any academic background in theology. It appears that his full-time job is teaching piano to private students.

Walford now proudly displays his photos with the pope and his family on his Twitter feed and his Facebook page.

“Congrats!” wrote a priest to Walford on his page. “It looks like you garnered Papal curiosity … not everyone can claim that; not by a long shot.”