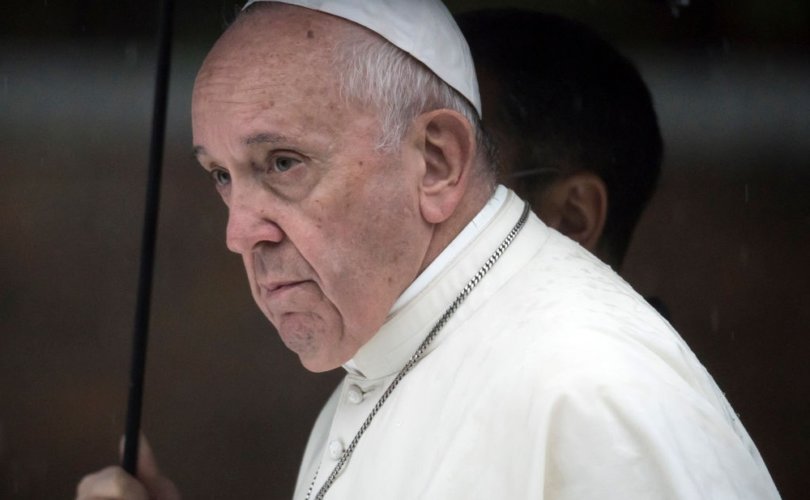 VATICAN CITY (LifeSiteNews) – Pope Francis said Friday he thanks God “that Ireland has such a wise man as its Head (of State)”, despite Irish President Michael D. Higgins’ support for a range of anti-life and anti-family laws that run contrary to the Catholic faith.

The Roman Pontiff was meeting with Higgins in the Vatican this morning when, during their formal photocall, he told those gathered that “today, I did not just meet a man, a president; I met a wise man of today.”

“I thank God that Ireland has such a wise man as its Head (of State),” he added.

Today’s comments by Pope Francis echo previous tributes he has paid to other pro-abortion politicians, including Italian politician and abortionist Emma Bonino, who was Italy’s leading proponent of abortion for decades.

Bonino, who Pope Francis called one of the country’s “forgotten greats” in 2016, was infamously pictured performing an illegal abortion during her early days of campaigning for abortion, after having had an illegal abortion herself at the age of 27.

Admitting when challenged that Bonino’s support for abortion, euthanasia, and homosexual marriage put her at odds with the Catholic Church, Pope Francis nonetheless said “[T]rue, but never mind,” and that “[W]e have to look at people, at what they do,” referring to her concern for Africa.

Responding to Pope Francis’s comments about President Higgins, Ireland’s Catholic Association chairman Brian Flanagan told LifeSiteNews that the most disappointing aspect of the meeting was the pope’s apparent unwillingness to call the Irish leader to repentance.

“One of the seven gifts of the Spirit is wisdom, the ability to choose and act according to the law of God; that our Pope could have attributed wisdom to one of the principal pro-abortion politicians in Irish history beggars belief,” Mr. Flanagan said.

“As an ex officio champion of charity, the pope should have followed age-old religious protocol: he should have informed and warned President Higgins of the eternal consequences for the perpetrators of such a crime against the most defenseless of God’s beloved creation,” he continued.

“It is a serious failure of Christian love not to have done so,” Fanagan went on. “The whole point of the successor of St Peter meeting with pro-abortion politicians should be to call them to repentance and conversion, not to extol them as worthy leaders, all the time overlooking the crimes they facilitate.

“President Higgins has a long track record of supporting intrinsic evils that affect the most vulnerable, so we are profoundly disappointed, indeed dismayed, that our Pope should have given him a ringing endorsement today,” Flanagan declared.

A Vatican statement issued after the meeting said the pope had privately discussed climate change, migration, and Covid-19 with the Irish president.

The Irish leader gifted the pope a traditional fisherman’s stick interwoven with three strands to represent the Holy Trinity, before then meeting with Cardinal Secretary of State for the Vatican Pietro Parolin and Archbishop Paul Richard Gallagher, the Vatican’s Secretary for Relations with States.

Higgins had signed an abortion bill in 2013 that made the killing of unborn babies legal when a woman claimed to be suffering from suicidal ideation as a result of her pregnancy.

The same bill also legalized abortion for physical threats to a mother’s life, despite extensive medical evidence that abortion is never needed to save a mother’s life in an emergency due to the use of ethical treatments.

Ireland had some of the best records in maternal healthcare before abortion was introduced, including one of the lowest maternal mortality rates of any country in the world, giving credence to the claims of Irish pro-lifers that abortion is not needed to save mothers’ lives in medical emergencies.

In November 2015, Higgins moved Ireland even further from its constitutional foundation in divine and natural law by signing a bill that legalized homosexual “marriage” following a referendum.

Following a repeal of the country’s constitutional protection of the right to life, the Irish president then signed another abortion bill in 2018 that legalized abortion-on-demand up until twelve weeks, with abortion up until birth allowed if the baby is found to have a life-limiting condition.

The 2018 bill, which saw 6,666 Irish babies killed as a result in 2019, does not mandate any pain relief for babies being aborted, nor does it require hospitals to save the lives of babies born after failed abortions.

The Irish president followed that up most recently by signing a bill in 2019 that reduced the waiting time for divorce following another constitutional referendum.

Higgins, who describes himself as “spiritual” and is regularly lauded by Ireland’s press as a champion of human rights, previously described Ireland’s historic ban on abortion as having “no concern” for Irish women who would travel to England for abortions, and claimed that the successful 1983 referendum campaign to protect unborn babies had been “callous,” “sinister,” and “undemocratic.”

On Wednesday, just days before his endorsement of Higgins, Pope Francis reiterated his opposition to abortion by insisting “it’s murder,” but declined to support bishops and priests who would withhold Holy Communion from politicians who support the “right” to kill unborn babies.