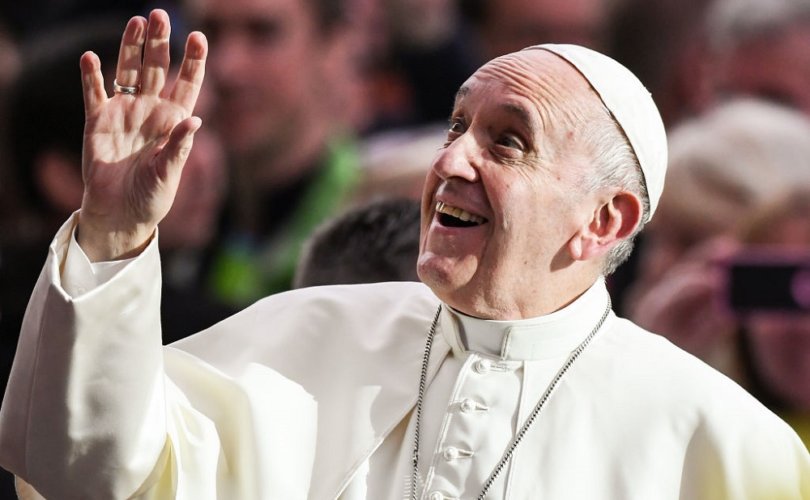 VATICAN CITY, July 14, 2020 (LifeSiteNews) — According to a report by the French Catholic newspaper La Croix, Pope Francis’s long-awaited document reforming the Roman Curia has already been signed and is currently being translated into various languages. The new constitution will lead to dozens of new appointments within the Vatican bureaucracy.

The La Croix article, written by Robert Mickens, did not provide any significant details of the new constitution, which it says is titled “Praedicate Evangelium” (“Preach the Gospel”).

“It is perhaps the most ambitious project of the current pontificate,” wrote Mickens. Based only on “a source at the Vatican” who claimed the document is done, Mickens spent the bulk of the article talking about “more than two-dozen Rome-based cardinals [having to be] sent into retirement.”

He admitted himself that it is unlikely for the document to be published during the summer. “Naturally, this would be extremely out of the ordinary,” he wrote. “The middle of Roman summer is not usually the time for launching major Vatican documents or important events. But this is not an ordinary pontificate.”

“No matter when the new text is unveiled, the ramifications will be manifold and likely historic,” he added. “One of the first and most visible of these will be a massive personnel shake-up.”

In any case, a number of cardinals heading various congregations and other parts of the Roman Curia are older than 75, which has been the “traditional” retirement age among bishops for several decades. At that point, they are expected to submit their resignation. However, Pope Francis left several leaders in place. La Croix speculates that with the reform of the Roman Curia to be released soon, those heads will roll.

Mickens specifically mentioned Cardinal Robert Sarah, prefect of the Congregation for Divine Worship and the Discipline of the Sacraments. While put in his position by Pope Francis himself, the pope has rebuked the cardinal several times for his statements on the liturgy.

“This is the third time that Pope Francis has publicly corrected Cardinal Sarah for giving an alternative interpretation to his instructions on the liturgy,” wrote the dissident Jesuit publication America Magazine. “On previous occasions, the pope corrected the cardinal after Sarah misrepresented the pope’s instruction on the washing of the feet on Holy Thursday, and again after Sarah publicly advocated that the Eucharist should be celebrated with the priest facing east (‘ad orientem’).”

Mickens also pointed to several positions at a lower level of the Vatican’s bureaucracy, for instance on the Council for the Economy, headed by German cardinal Reinhard Marx. However, the archbishop of Munich and Freising will probably stay, Mickens speculated.

As pointed out by Mickens, the draft of the new constitution “was completed over a year ago, but the pope wanted to give national episcopal conferences, select heads of religious orders and certain theologians the opportunity to offer more suggestions.”

In January 2020, canon lawyer Ed Condon said in an analysis piece for the Catholic News Agency (CNA) that the reform of the Roman Curia could lead to a validation of the Synodal Path in Germany, calling for significant changes to Catholic teaching on sexual morality.

“In what would be a significant innovation, the draft constitution specifically refers to the ‘genuine doctrinal authority’ of national bishops’ conferences,” explained Condon. Further, according to the draft, the Congregation for the Doctrine of the Faith “‘will apply the principle of subsidiarity’ on any measures related to ‘protecting the faith.’”

In Condon’s article, “multiple sources familiar with the drafting process” are cited as saying the document “was heavily informed by the wishes of Cardinal Reinhard Marx of Munich, [former] head of the German bishops’ conference, and a key member of the Pope’s council of cardinal advisors.” This, added Condon, “was the focus of sustained criticism in feedback offered by bishops around the world last summer.”

Officials working for the Congregation for the Doctrine of the Faith and the Congregation for Bishops told CNA “that, if the provision remains in the final text of the constitution, it would essentially validate the German synodal process, whatever the curia’s stated objections to it.”

In his piece for La Croix, Robert Mickens also mentioned a rumor that “the Vatican recently ordered 15 rings to be made for an upcoming consistory” creating new cardinals. “Again, it would be highly unusual, especially at a time when even churchgoers have to respect social distancing and wear facemasks.”

“But there is no Church canon that says the red hat ceremonies must be the elaborate galas that they’ve turned into over the years,” he concluded.