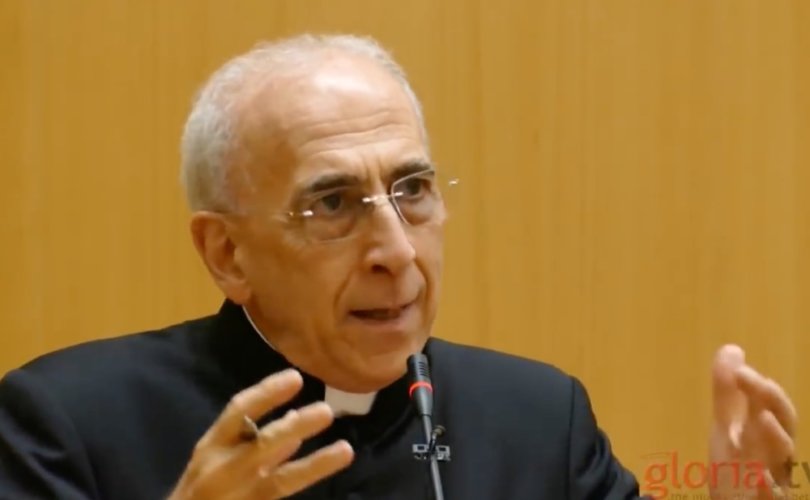 November 15, 2018 (edwardpentin.co.uk) –In a forceful interview with Italian Vaticanist Aldo Maria Valli, Msgr. Nicola Bux has warned that the current pontificate is issuing statements that are generating “heresies, schisms, and controversies of various kinds” and that the Holy Father should issue a profession of faith to restore unity in the Church.

In the interview, published Oct. 13 but overlooked due to the Youth Synod taking place in Rome last month, the theologian consultor to the Congregation for the Causes of Saints said “heretical statements” on marriage, the moral life and reception of the sacraments are now “at the center of a vast debate which is becoming more and more passionate by the day.”

Msgr. Bux said the origin of many of these questioned teachings — highlighted in a September 2017 filial correction and at a Rome conference in April on doctrinal confusion in the Church — is the Pope’s post-synodal apostolic exhortation Amoris Laetitia, but they have since become “considerably worse and more complicated.”

He said this has led some senior prelates, such as Cardinal Walter Brandmüller, one of the four cardinals to sign the dubia in 2016, to reiterate a call for a “profession of faith on the part of the Pope.”

But Msgr. Bux said this would be difficult to achieve given the Pope’s vision of the Church as a federation of ecclesial communities — something Msgr. Bux described as “a bit like the Protestant communities.”

Since the two synods on the family, the Italian theologian said “two gears” of faith and morality now exist, seen most clearly over whether to give Holy Communion to some “remarried” divorcees. This has caused “great discomfort” to “many bishops and parish priests” because of an “unstable and confused pastoral situation,” he said.

To remedy the situation, Msgr. Bux, a former consultor to the Congregation for the Doctrine of the Faith under Benedict XVI, still believes some kind of profession of faith is required of the Pope. He referred to a similar profession St. Paul VI made in 1968 that reaffirmed what is Catholic “in the face of the errors and heresies” that came immediately after the Second Vatican Council.

“If this doesn’t happen,” he warned, “the apostasy will deepen and the de facto schism will widen.”

Msgr. Bux feels the situation has become especially urgent after the Pope changed the Catechism in August to declare the death penalty “inadmissible.” The change contradicts the Tridentine and St. Pius X Catechisms, the theologian asserted, the latter of which taught that the legitimacy of capital punishment was in “full conformity with Divine Revelation.”

“Either one admits that the Church has taught the legitimacy of something not conforming to the Gospel practically for two thousand years, or one must admit that it was Pope Bergoglio who erred,” Msgr. Bux said, adding: “This is a very sensitive issue, but sooner or later he’s going have to put this right. And not just for the death penalty.”

Asked by Valli if this sets a precedent for the Pope to change more of the Catechism if he wishes, the theologian said this is a “very disturbing question,” and that another “legitimate concern” is to keep the deposit of faith from “sensitivities contingent on today’s or tomorrow’s society.”

The Pope cannot “impose his own opinion” on the Church, Msgr. Bux stressed, quoting Joseph Ratzinger, because on matters of faith, morals and the sacraments, the Church can “only consent to the will of Christ.” And yet he said “many points” in Amoris Laetitia are “cumbersome and contradictory” as well as contrary to the thinking of St. Thomas Aquinas, despite the exhortation asserting otherwise.

He also pointed out that the tendency of this pontificate to be silent in the face of criticism, or refuse to engage the charges of heresy or apostasy, bring to mind St. Pius X’s warning in his 1907 encyclical Pascendi dominici gregis: That never “clearly confessing one’s own heresy” is “typical behaviour of the modernists, because in this way they can hide themselves within the Church.”

Valli and Msgr. Bux then went on to discuss the practical, theological and juridical difficulties of correcting a pope of such errors. These include the hurdle that heresy must be “manifest and public,” that the Pope must be fully conscious of having voluntarily questioned a truth of the faith, and that he also has a “kind of immunity from jurisdiction” due to the canonical principle that no one can judge the Apostolic See and “even less” can they “judge their shepherd.”

A further difficulty today, he said, is “identifying the exact contours of a heresy” because theology “is no longer reliable.” Instead, he said it has become a “sort of arena” where a truth is affirmed, but someone else is always “willing to defend the exact opposite.”

“More useful” than a fraternal correction, he said, would be to examine the “juridical validity” of Pope Benedict’s XVI’s resignation and “whether it is full or partial.” Jesus, he said, did not give the keys of heaven to Peter and Andrew but “said it only to Peter.” Such an “in-depth study” of the resignation, he said, could help to “overcome problems that today seem insurmountable to us.”

“Great change” in the Church is “palpable” under Pope Francis, Msgr. Bux said, along with a “clear intention to mark a line of discontinuity, or break, with previous pontificates.” Such a rupture, he went on to say, is a “revolution” that “generates heresies, schisms, and controversies of various kinds” and “all of them can be traced back to sin.”

He referred to 3rd century Church Father Origen of Alexandria who said, “Where there are sins, there are multiplicity, schisms, heresies, dissensions. But where there is virtue, there is singleness and union, on the basis of which all believers are one heart and one soul.”

The current crisis has negatively affected the liturgy, he said, but as an encouragement, he quoted St. Athanasius of Alexandria’s address to Christians who suffered under the Arians:

“You remain outside the places of worship, but faith dwells in you. Let’s see: what is more important, the place or the faith? True faith, of course. Who has lost and who has won in this fight, the one keeps the See or observes the faith? It is true, the buildings are good, when the apostolic faith is preached to you; they are holy if everything happens there in a holy way… You are the ones who are happy, you who remain within the Church because of your faith, who keep its foundations strong as they have been passed down to you through the apostolic tradition. And if some execrable jealousy tries to shake it on various occasions, it does not succeed. They are the ones who broke away from it in the current crisis. No one, never, will prevail against your faith, beloved brothers, and we believe that God will make us one day return our churches. The more violent they try to occupy the places of worship, the more they separate themselves from the Church. They claim that they represent the Church, but in reality they are the ones who are, in turn, expelled from it and go off the road” (Coll. Selecta SS. Eccl. Patrum. Caillu and Guillou, vol. 32, pp 411-412).

Valli lastly asked whether heresy is not just about spreading false doctrines but also “silencing the truth about doctrine and morals.”

“Of course it is,” responded Msg. Bux. “Where there is no doctrine, there are moral problems — as we are seeing. When the Pope and bishops do this, they use their office to destroy [doctrine].”

Quoting St. Augustine, he said “they seek their own interests, not the interests of Jesus Christ; they proclaim his word, but spread their ideas.”

The name of Jesus Christ, he said referring to comments by the late Cardinal Giacomo Biffi of Bologna, “has become an excuse to talk about something else: migration, ecology and so on. Thus, we are no longer unanimous in speaking (1 Cor 1:10) and the Church is divided.”

Editor's note: This article first appeared on Edward Pentin's blog here. It is republished by permission of the author.