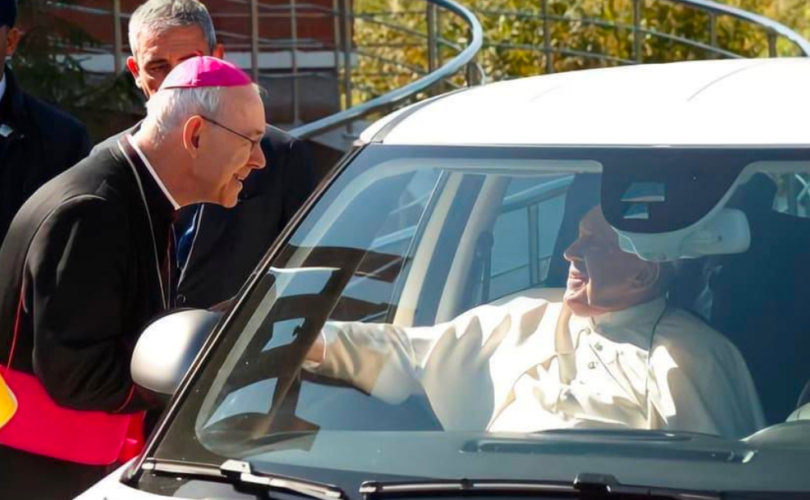 NUR-SULTAN, Kazakhstan (LifeSiteNews) – Pope Francis has appeared to reject criticism by Bishop Athanasius Schneider about the ecumenical Congress the pontiff recently attended in Kazakhstan, saying the meeting was a way to “honor” the Catholic faith.

The Pope made his comments while on the return flight from Kazakhstan to Rome, having been in the country for three days to attend the 7th Congress of Leaders of World and Traditional Religions.

At the start of his final day in the country, the Pontiff met with Kazakhstan’s clergy at the Cathedral of Our Lady of Perpetual Help, the mother-church of the Archdiocese of Astana, of which Bishop Schneider is an auxiliary. The bishop has often warned about Pope Francis’ teachings, particularly regarding their vague relation to, and deviance from, the Catholic faith.

Prior to welcoming the Pope at the cathedral, Bishop Schneider spoke about the inter-religious Congress to the assembled media outside.

He noted first that “the congress as such has a good aim to promote mutual respect and understanding in the world today.” Yet he added how “it has also a danger because it could give the impression of a ‘supermarket of religions,’ and this is not correct because there is only one true religion, which is the Catholic Church, founded by God himself.”

“This is not correct because there is only one true religion, which is the Catholic Church, founded by God himself, but commanded to all man, to all religions, to believe and accept his son Jesus Christ, the only Savior,” he said.

Bishop Schneider continued by highlighting the primacy of the Catholic Church:

There is no other way to salvation, and in these meetings the Catholic Church is visually and exteriorly one of the many religions, and this is, in my opinion, a negative point and a dangerous point.

Far from being a good event, Bishop Schneider described the Congress as “a supermarket of religions, a show.”

In speaking to reporters on the papal plane while en-route to Rome yesterday, Pope Francis appeared to respond to this criticism of the Congress.

“Someone was criticizing, and they said to me: ‘This is fomenting; this is causing relativism to grow,’” he said.

“There’s nothing of relativism! Everyone had their say, everyone respected each other’s position, but we dialogue as brothers,” he continued.

— Article continues below Petition —
Stand with Abp. Lucas as he resists transgenderism in schools
Show Petition Text
7961 have signed the petition.
Let's get to 9000!
Thank you for signing this petition!
Add your signature:
Show Petition Text

The Pope defended this “dialogue” saying that “if there is no dialogue there is either ignorance or war. Better to live as brothers, we have one thing in common, we are all human. Let’s live as humans, with good manners: what do you think, what do I think? Let’s agree, let’s talk, let’s get to know each other.”

The Pope added that he saw the Catholic faith as being honored through such inter-religious meetings, and that “this is not relativism, I don’t give up my faith if I speak to another’s faith.”

On the contrary. I honor my faith because another listens to it and I listen to theirs.

While giving two keynote addresses at the Congress during his brief stay in the country, Pope Francis did not promote the Catholic faith. In his first, he failed to mention Jesus Christ by name at all, and predominantly used more ecumenically acceptable synonyms for God, such as “Almighty, Creator, the Divine.” He also quoted extensively from a Muslim philosopher instead of from Scripture.

RELATED: Pope Francis signs document saying ‘differences in religion’ are part of ‘God’s will in creation’

Bishop Schneider’s words were already vindicated hours prior to the Pope’s in-flights comments, when Pope Francis signed a Declaration drawn up by the Congress participants, which stated – in apparent contradiction to Catholic teaching – that “pluralism and differences in religion, skin color, gender, race and language are expressions of the wisdom of God’s will in creation.”

That document was subsequently changed quietly, hours after it was signed and publicly pronounced. The new text now reads “Religious diversity is permitted by God and, therefore, any coercion to a particular religion and religious doctrine is unacceptable.”