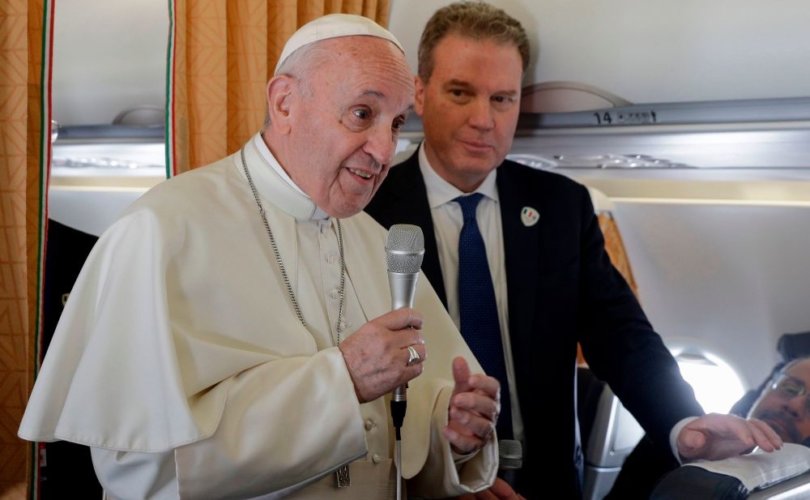 Pope Francis talks to journalists aboard a plane flying from Fiumicino aiport to Dublin, on August 25, 2018, as part of his two-day visit to Ireland.Gregorio Borgia / AFP / Getty Images

Archbishop Carlo Maria Viganò, who served as apostolic nuncio in Washington D.C. from 2011-2016, wrote in a letter published last night that, after Pope Francis’ election, he had communicated the problems about McCarrick to the Pope, but rather than continue the sanctions, Pope Francis made McCarrick “his trusted counsellor.”

The Pope was questioned about the allegation aboard the papal plane this evening on the way back to Rome after his visit to Ireland for the World Meeting of Families.

“Read the statement carefully yourselves and make your own judgment. I am not going to say a word about this,” Pope Francis said.

“I believe that the statement speaks for itself, and you all have sufficient journalistic ability to draw conclusions. It is an act of trust. When a little time goes by, and you have drawn conclusions, perhaps I will speak about it, but I would like your professional maturity to do this work. It will do you all good, really.”

In comments to LifeSite today, Cardinal Raymond Burke insisted Vigano’s charges must be taken seriously and also called for a thorough investigation of every allegation.

“The corruption and filth which have entered into the life of the Church must be purified at their roots,” Burke said.

“The declarations made by a prelate of the authority of Archbishop Carlo Maria Viganò must be totally taken to heart by those responsible in the Church. Each declaration must be subject to investigation, according to the Church’s time-tried procedural law.”

Cardinal Burke called on “all good Catholics” to “insist upon knowing the truth” and added that they “must pray and sacrifice for the Church at this tumultous time.”

A purification, he said, “can only take place with the full and uncompromised respect for the truth.”

We present below a LifeSite translation of the relevant section from today’s press conference on the papal plane.

CBS: Good evening, Holy Father. I’ll return to the subject of [sexual abuse]. Very early this morning a document by Archbishop Carlo Maria Viganò was published. In it, he says that, in 2013, he had a personal conversaton with you at the Vatican, and that during that conversation he spoke with you explicitly about the behaviour of, and sexual abuse by, the former Cardinal McCarrick, and I wanted to ask you if this was true.

I would also like to ask something else. The Archbishop also said that Pope Benedict had sanctioned McCarrick, that he told him he couldn’t live in a seminary, he couldn’t celebrate the Mass publicly, that he couldn’t travel, he was sanctioned by the Church.

May I ask you whether these two things are true?

I will respond to your question. But I would prefer that we first speak about the trip, and then other topics. I got distracted with Stefania and now … but I will respond.

This morning I read that statement. I read it, and I will say sincerely that I must tell you all this — you [CBS] and all of you who are interested: Read the statement carefully yourselves and make your own judgment. I am not going to say a word about this. I believe that the statement speaks for itself, and you all have sufficient journalistic ability to draw conclusions. It is an act of trust. When a little time goes by, and you have drawn conclusions, perhaps I will speak about it, but I would like your professional maturity to do this work. It will do you all good, really.

[CBS makes an inaudible comment as the mic wasn’t on … ]

Pope Francis: Alright as it is.

[CBS requests to ask another question]

Pope Francis: This is part of the statement on McCarrick. Study and then I will say something.

Changing the subject, the Pope turned to his meeting with Marie Collins and the abuse victims on Saturday, and his act of forgiveness at today’s Mass. He said:

Pope Francis: But yesterday, I hadn’t read it and I allowed myself to speak clearly with Marie Collins and the group, which was bitter, something I sufferered greatly from. But I believe we had to listen to these eight people, and from this meeting the proposal came out. I made it, but they accepted it, they helped me to formulate it, to ask for forgiveness today in the Mass but about concrete things. For example, the last one that I had never heard about, those mothers … it was called “the cleansing of women,” when a woman became pregnant, I don’t know, and she wasn’t married, and she went to the hospital, […] the sisters ran it, and then they gave the children up for adoption to people. There were two children, at that time, and they were trying to find their mothers, to see if they were alive, they didn’t know. They told them that it was a mortal sin to do this, and they told the mothers who called for their children, that it was a mortal sin. That is why I ended up saying today, that this is not a mortal sin but the fourth commandment. And the things I said today, some of which I did not know about. It was painful for me, but I also had the consolation of being able to help clarify these things.

Translation by Diane Montagna of LifeSiteNews