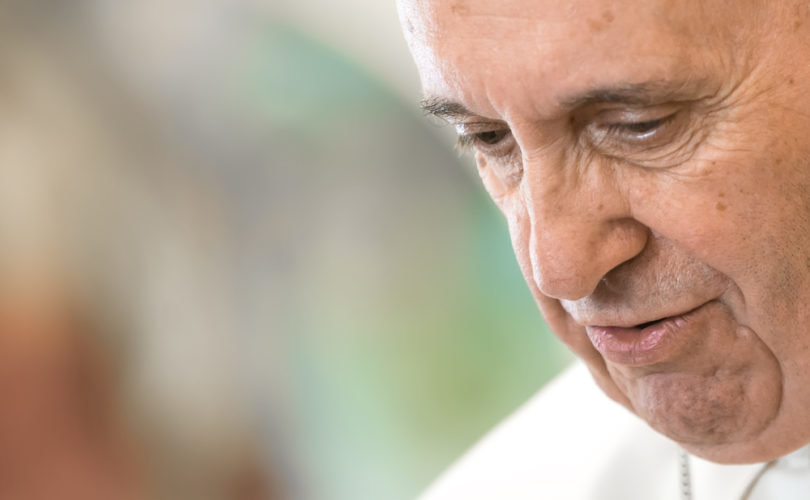 VATICAN CITY, April 8, 2020 (LifeSiteNews) –– In a homily delivered at Casa Santa Marta on Wednesday of Holy Week, Pope Francis indicated that he does not know if Judas –– the disciple who betrayed Jesus, leading to his crucifixion –– is in hell.

“How did Judas end up? I don’t know,” said Pope Francis, according to a translation of his homily published by Aleteia.

The Pontiff began by suggesting that “Judas, perhaps a good boy, with good intentions, ends up as a traitor to the point of going to the market to sell,” according to Vatican News. But “Christ never calls Judas a ‘traitor’ personally. Rather, Jesus calls him ‘friend’ and kisses him.”

Something that calls my attention is that Jesus never calls him “traitor”: (Jesus) says he will be betrayed, but he doesn’t say to (Judas), “traitor.” He never says, “Go away, traitor.” Never.

He then spoke of “The mystery of Judas,” reminding listeners that although Judas had betrayed Jesus, our Lord had called him “friend” and kissed him.

What is the mystery of Judas? I don’t know … Don Primo Mazzolari explains it better than me … Yes, it consoles me to contemplate that capital (of the column) of Vezelay: How did Judas end up? I don’t know.

But does that mean that Judas is in Hell? I don’t know. I look at that capital. And I listen to the word of Jesus: ‘Friend.'”

While the eternal fate of Judas may puzzle Pope Francis, it is no mystery to Cardinal Thomas Collins, Archbishop of Toronto.

During a homily delivered during a live-streamed Mass on the same day, Cardinal Collins referred to the writings of the poet, Dante Alighieri.

“In Dante’s Inferno, he describes the reality of sin in all of its forms,” Collins said.

“But at the pit of hell, where there is not fire but ice, cold and frozen by the flapping wings of Satan,” Collins said, “at the icy pit of hell, we have Judas.”

“For the sin of Judas is a sin of betrayal,” he continued, “and that is why he is in the mouth of Satan being gnawed by him for eternity.”

“We know what happened to Judas,” said Collins. “He did not repent. But he could have, if he had wanted to” as did St. Peter who had denied Jesus.

Pope St. Leo the Great, St. Augustine, St. Thomas Aquinas, St. Catherine of Siena, the Catechism of the Council of Trent, and the Church’s liturgy are all of one accord regarding the fate of Judas Iscariot.

Cardinal Avery Dulles once explained in an article titled ‘The Population of Hell’ about the fate of Judas:

“The New Testament does not tell us in so many words that any particular person is in hell. But several statements about Judas can hardly be interpreted otherwise. Jesus says that he has kept all those whom the Father has given him except the son of perdition (John 17:12). At another point, Jesus calls Judas a devil (John 6:70), and yet again says of him: “It would be better for that man if he had never been born” (Matthew 26:24; Mark 14:21),” he wrote.

“If Judas were among the saved, these statements could hardly be true. Many saints and doctors of the Church, including St. Augustine and St. Thomas Aquinas, have taken it as a revealed truth that Judas was reprobated. Some of the Fathers place the name of Nero in the same select company, but they do not give long lists of names, as Dante would do,” he added.