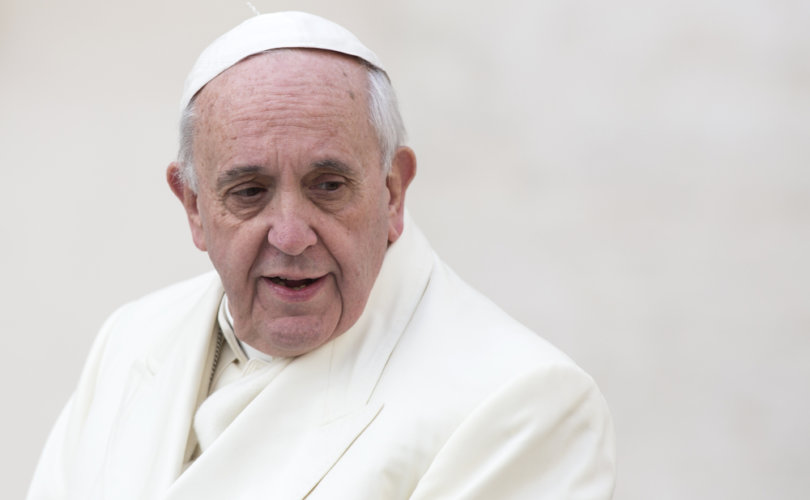 April 18, 2016 (LifeSiteNews) – It was the footnote heard around the world. Footnote 351, to be precise. The dynamite – or so it seemed to some – quietly buried deep in Pope Francis’ recent apostolic exhortation, Amoris Laetitia.

To journalists poring over the exhortation hoping to learn how the pope intended to resolve the debate that had pitted cardinal against cardinal and bishop against bishop at the two recent synods at the family, it seemed to provide the key.

“In certain cases, this can include the help of the sacraments,” the footnote reads, before making reference to the Eucharist and confession.

Were these the unassuming words with which Pope Francis was changing the long-standing Church practice banning divorced and civilly remarried Catholics from receiving Communion?

To those involved in or following the debate, the fact that Pope Francis himself was apparently unaware of the controversial footnote, let alone the flap that it was almost certain to cause in the media, is bewildering, and provokes any number of uncomfortable questions.

To some, the answer was clearly yes. After all, the footnote comes in the middle of a discussion about the Church’s pastoral response to Catholics living in objectively sinful “irregular” unions. What else could the pope be saying, other than that the Church’s former absolute ban on such Catholics receiving Communion – clearly formulated by Pope St. John Paul II and Cardinal Ratzinger – could now admit of some exceptions?

Others, however, urged caution. They argued that the footnote can only accurately be read “in light” of established Church practice and canon law, and that the ambiguous term “in certain cases” needed to be explored and properly understood.

RELATED: Vatican website misquotes Pope Francis on Communion for the divorced and remarried

Some expressed hope that the Pope might step in at some point and clarify his meaning. That, however, now seems unlikely.

In his return-flight press conference this past week from the island of Lesbos, Pope Francis told a reporter who asked him about the footnote that he doesn’t even remember it, and lamented that so much attention has been paid in the media to that footnote – and, indeed, the entire issue of Communion for the divorced and remarried. Instead, he said, the media should focus on the current “crisis” in the family.

“Don’t we realize that the falling birth rate in Europe is enough to make one cry?” he said, as translated by the Catholic News Agency. “And the family is the basis of society. Do you not realize that the youth don’t want to marry? … Don’t you realize that the lack of work or the little work (available) means that a mother has to get two jobs and the children grow up alone?”

“These are the big problems,” he concluded. “I don’t remember the footnote…”

As for why the information was relegated to a footnote, the pope speculated that perhaps it was because it dealt with a “general” matter that he had previously dealt with in his letter Evangelii Gaudium.

However, the media are not the only ones who have focused on the importance of footnote 351. In his presentation at the Vatican on the day of the release of the exhortation, Cardinal Christoph Schonborn himself called attention to the footnote. Speaking of the pope’s treatment of those in “irregular unions,” the cardinal had stated: “In the sense of this ‘via caritatis’ (AL 306), the Pope affirms, in a humble and simple manner, in a note (351) that the help of the sacraments may also be given ‘in certain cases’. But for this purpose he does not offer us case studies or recipes.”

During the same in-flight interview, Pope Francis, in response to another journalist’s question about whether Amoris Laetitia had changed the Church’s approach to divorced and remarried Catholics and the sacraments, urged the reporters to read Cardinal Schonborn’s presentation at the Vatican. “There you will find the answer to your question,” he said.

Footnote 351 also took center stage in the analysis published by Father Antonio Spadaro, the Jesuit priest who edits La Civiltà Cattolica, a Jesuit journal approved by the Vatican prior to publication. Spadaro’s analysis is of vital importance, not only because he is known to be a close personal friend and advisor of Pope Francis’, but also because he is believed to have been personally involved in drafting the exhortation.

Citing footnote 351, Spadaro argued that Amoris Laetitia marks an “evolution” in the way the Church will approach its “accompaniment” of those in irregular unions. Spadaro argues that the exhortation introduces a new form of discernment, one that is “without limits on integration, as appeared in the past.” Speaking of past limits that are no longer in effect, he singles out Pope John Paul II’s requirement that couples in adulterous second unions live in “complete continence” before returning to the Sacraments.

Meanwhile, German Cardinal Reinhard Marx, in a statement co-authored with Archbishop Heiner Koch and Bishop Franz-Josef Bode, also references the footnote. While veteran Vatican journalist John Allen speculated that footnote 351 may go down as one of two of the “most famous” footnotes in papal history – the second also being found in Amoris Laetitia.

Indeed, to those involved in or following the debate, the fact that Pope Francis himself was apparently unaware of the controversial footnote, let alone the flap that it was almost certain to cause in the media, is bewildering, and provokes any number of uncomfortable questions.

For starters: If not the pope, who, then, was responsible for drafting and inserting that footnote? Were they not aware of its implications? How did the many advisors who undoubtedly read the final draft of the exhortation fail to understand the furor the footnote would undoubtedly provoke? And, finally, why didn’t they warn the pope that the errant footnote would almost certainly take center stage in the media, and distract from what he intended to be his central message?