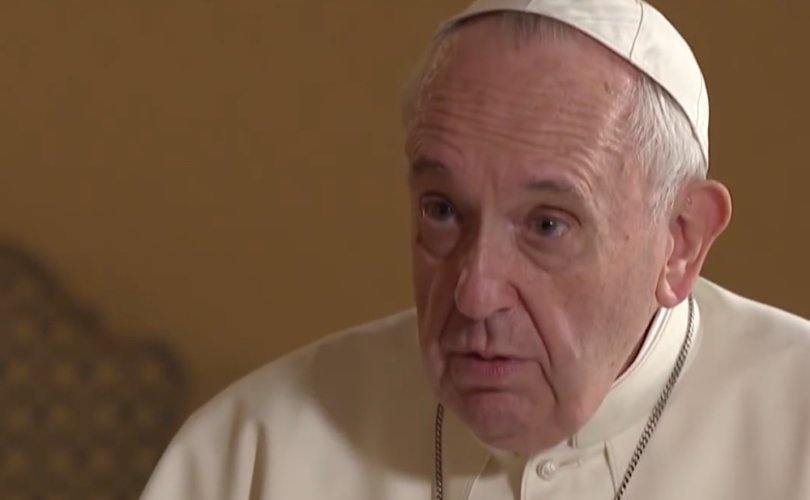 ROME, May 29, 2019 (LifeSiteNews) – Pope Francis said in a television interview with a Mexican journalist that if Christians “were to convince” themselves that homosexuals and those in “irregular” relationships are “children of God, things would change a lot.”

Televisa journalist Valentina Alazraki had asked the Pope in an interview published May 28 about persons in “irregular” relationships as well as homosexual partners receiving Holy Communion (read full question and answer below).

“Nor can I tell a person that his behavior is in accord to what the Church wants…I can't tell a person that his behavior is according to what the Church wants…But I do have to tell him the truth: 'You are a child of God and God wants you that way, now, get right with God'. I have no right to tell anyone that he is not a child of God because he would miss the truth. Nor to tell anyone that God doesn't love him, because God loves them all, He even loved Judas,” he added.

Saying that in his exhortation Amoris laetitia he calls on enquirers to consult a priest and thus seek a “way” forward, the Pope said that he would not rule “from 12,000 kilometers away” whether or not someone should receive Holy Communion because it would be “irresponsible.”

He said it would be a case of “casuistry” that he cannot accept.

The Pope also said he was “angry” over media reports that he suggested that parents should consult a “psychiatrist” for counseling children with same-sex attraction. He said that what he meant was a “professional,” adding that parents have a right to “recognize that son as homosexual, that daughter as homosexual.”

“You can't throw anyone out of the family or make life impossible because of that,” he said.

The Pope was referring to an August 2018 exchange he had with journalists that stirred widespread indignation among LGBT activists. While returning from the World Conference of Families in Ireland, he said that much “can be done through psychiatry” when parents notice homosexual behaviors in their children. When LGBTQ activists objected, Vatican officials later released a scrubbed text that removed the reference to psychiatry.

Although he told journalists in 2018 that parents may consult a psychiatrist in their children’s case, the Pope told Alazraki “I should have said 'professional', I said 'psychiatrist'. I meant a professional because sometimes there are signs in adolescence or pre-adolescence that they don't know are from a homosexual tendency or if the thymus gland didn't atrophy in time, I don't know, a thousand things, right?” Objecting to news headlines such as “Pope sends homosexuals to psychiatrist,” he insisted that it was not true. Repeating that homosexuals are “children of God,” he objected to having his words “taken out of context.”

While the Pope repeated that he wants to tell homosexuals that they deserve a family, this “doesn't mean approving homosexual acts, far from it.”

The Catholic Church teaches that homosexual acts are “acts of grave depravity,” calling such acts “intrinsically disordered.” Such acts are “contrary to the natural law” in that they “close the sexual act to the gift of life.” The Church moreover teaches that God does not create any man or woman with attraction to the same sex, calling such an inclination “objectively disordered.” As is the case with any other kind of sin, be it murder, theft, adultery, Christianity holds that followers of Christ must love the sinner while hating the sin. The same is true for those who commit homosexual sins. The Church teaches that people who struggle with same-sex attraction must be “accepted with respect, compassion, and sensitivity.”

Alazraki said that some of the Pope’s acquaintances in Argentina say that he was “conservative” with regard to homosexuality and same-sex “marriage” while serving as archbishop of Buenos Aires but has since become “more liberal” after becoming Pope. Recalling that he had fought against the legalization of same-sex “marriage” in Argentina, Alazraki asked whether he agreed with the above description. Having already said that he is “conservative,” the Pope told the journalist that he has always defended Church teachings. “And it is curious, regarding the legalization of homosexual marriage…it is an incongruity to speak of homosexual marriage.”

Saying that he has undergone change and has “grown a little,” Francis said he has “become a little more holy” since becoming Pope. Having become a successor of St. Peter, he said that his criteria have broadened and made him “more aware of certain things of which I wasn’t before.” In sum, the pontiff said, “No, I think there are changes in that sense, yes. But, conservative… I am both.”

Excerpt of Valentina Alazraki's May 28, 2019 interview with Pope Francis.

Valentina Alazraki: Perhaps there is another subject that stands out and that I think it would be good to explain. It is your dealings with people who live in situations that used to be called “irregular”, let's just say so. I give you the example of when you received in Santa Marta [the current papa residence] a Spanish transexual with his partner and, of course, those people leave Santa Marta saying that you embraced them, blessed them, told them that God loves them, or you picked up the phone to call a divorced Argentine woman who then she leaves saying: 'The Pope told me that I can receive Communion' and of course, the faithful come with one case or another to the  poor priests and say: 'It's because the Pope told me that I'm okay and that I can have Communion'. And the priests put their head in their hands and say: 'What do I do now?', because the doctrine has not changed, let's say. So how do you handle these situations?

Pope Francis: Sometimes people, out of enthusiasm of having been received, say more things than the Pope said, let's take that into account.

Valentina Alazraki: It is a risk that you run…

Pope Francis: Of course, a risk. But they are all children of God, we are all children of God. All of them. I can't rule [descartar] anyone out. Yes, I have to take care of the one who plays dirty with me, who cheats on me, to take care of myself. But to rule out [descartar], no. Nor can I tell a person that his behavior is according to what the Church wants, I cannot. But I do have to tell him the truth: 'You are a child of God and God wants you that way, now, settle up with God'. I have no right to tell anyone that he is not a child of God because he would lack the truth. And to tell no one that God doesn't love him, because God loves them all. He even loved Judas. Even to the end, such love Jesus showed Judas. Evidently, these are cases at the limits that are sought, but …if one calls, I don't remember what I said to that lady, but I won't say anything more, so… I must have told her, certainly: 'Look, there in Amoris laetitia is what you have to do, talk to a priest, and with this to seek…'.

Pope Francis: A way, I open a way for you. But I am going to be very careful to say 'You can receive communion or not', from 12,000 kilometers away; it would be irresponsible. And besides, it would be to fall into the same thing, into casuistry, can or can't, which I don't accept. It is a process of integration into the Church. If all of us thought that people who are in an irregular situation, let's think this for God's sake because I don't like it….

Valentina Alazraki: Yes, it is a word that you detest, me too, but to understand each other.

Pope Francis: If we were convinced that they are children of God, things would change a lot.