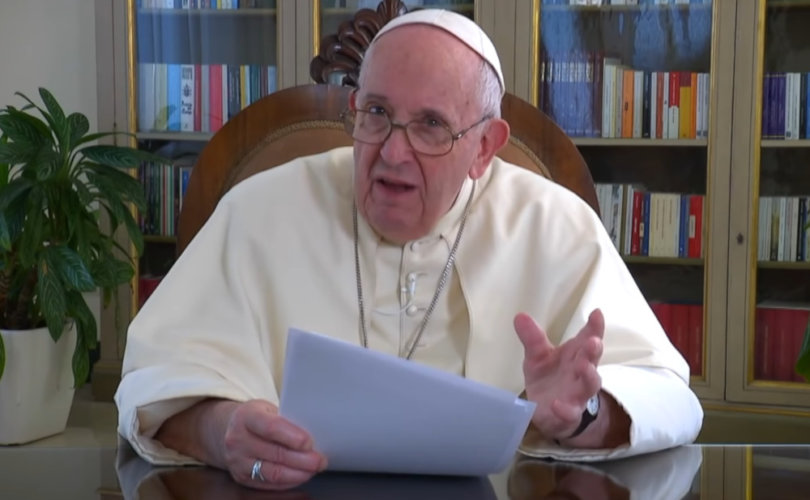 VATICAN CITY, October 23, 2020 (LifeSiteNews) — Pope Francis once again called for action to be taken on “climate change,” this time making the alarmist claim that there are less than 30 years to do so. The Holy Father didn’t mention God, or Jesus Christ, at all in his 13-minute video.

The new video is part of TED’s “Countdown” series, which seeks “to accelerate solutions to the climate crisis” and has the goal of building “a better future by cutting greenhouse gas emissions in half by 2030, in the race to a zero-carbon world.”

Pope Francis opens by saying, “Science tells us, every day, with more precision, that urgent action is needed … if we are to keep the hope of avoiding radical and catastrophic climate change.” He reemphasizes the point, “This is a scientific fact.”

“We will have to … persuade those in doubt; imagine new solutions,” he continues, referring to those sceptical of the climate change agenda. He further states that the goal must be to build “a world where we can meet the needs of the present generations, including everyone, without compromising the possibilities of future generations.”

Pope Francis makes note of the concept of “integral ecology,” a chapter title and a dominant theme in his 2015 encyclical Laudato Si, which he characterizes as a common response to the “cry of the Earth” and “the cry of the poor.” This concept, according to the Pope, reminds us that we are “interdependent on each other, as well as on our Mother Earth,” and should be the guiding principle of future life.

The pontiff proposes three globalist courses of action, which are drawn from his teaching in Laudato Si.

The first step is education which is centered on care of the earth, “developing the understanding that environmental problems are linked to human needs.” He praises the “new ecological and social awareness” as well as the fight which some wage for “defense of the environment and for justice.”

As a second issue, the Pope mentions water and nutrition: “Providing adequate nutrition for all, through non-destructive farming methods, should become the main purpose of the entire cycle of food production and distribution.”

Thirdly, Pope Francis calls for the replacement of “fossil fuels with clean energy sources.” He states that scientist think there are less than “30 years” in which to “drastically reduce greenhouse gas emissions into the atmosphere.”

The globalist theme continues, as the Pope suggests “excluding from investments those companies that do not meet the parameters of integral ecology” whilst rewarding those that do.

In a decidedly environmentalist turn of phrase, the Pope states: “In fact, the Earth must be worked and nursed, cultivated and protected. We cannot continue to squeeze it like an orange. And we can say that this — taking care of the Earth — is a human right.”

The Pope also attacks the current predominant economic system, stating that it is “unsustainable.” Consequently, we have a “moral imperative, and the practical urgency, to rethink many things: the way we produce; the way we consume; our culture of waste; our short-term vision; the exploitation of the poor and our indifference towards them; the growing inequalities and our dependence on harmful energy sources.”

Integral ecology is what the Pope identifies as being the foundation of a new relation between man and nature. He continues by saying that it leads to a “new economy,” focused on “integral well-being of the human being and to the improvement — not the destruction — of our common home.”

This system of life would also necessitate a revolution, or renewal in the political system, which is termed as “one of the highest forms of charity” since love “involves all peoples and it involves Nature.”

Pope Francis closes by stating that “we must act with urgency.”

In the 13-minute video, the Pope never mentions God, or Jesus Christ, or even the importance of religion. The only two paragraphs of the transcript containing the word “faith” do not refer to Catholicism, but simply ask people of any faith or none to commit to the climate change prevention effort.

The Pope is no stranger to promoting the climate change argument, and despite referring to scientists in his talk, has been corrected by scientists who say the “Pope is getting terrible advice from some exalted churchmen who are seriously deficient in scientific knowledge.”

In 2017, Pope Francis appeared in a film warning of the dangers of climate change, and more recently encouraged climate change activist Greta Thunberg to continue her alarmist campaign for fighting climate change.

Pope Francis also sent a message to the United Nations 2019 conference on climate change, demanding political action to prevent climate change, as well as trying to ensure that the poor in society would be protected from its effects.

Prior to that, in his message for the World Day of Prayer for the Care of Creation, the Pope said, “We have caused a climate emergency that gravely threatens nature and life itself, including our own.”