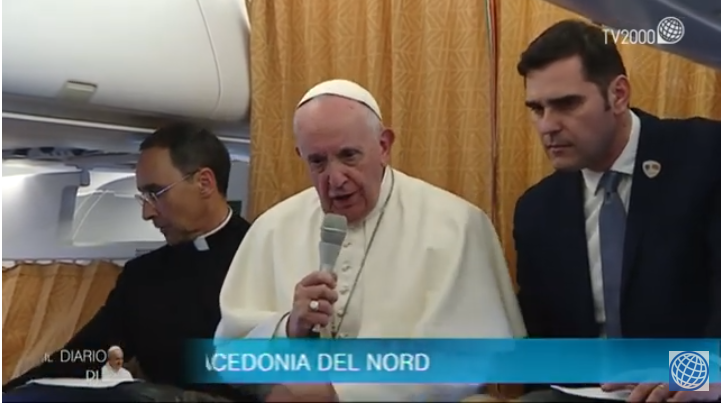 ROME, May 8, 2019 (LifeSiteNews) — Pope Francis has said there is no historical evidence to prove that a female equivalent of the ordained male diaconate ever existed in the Catholic Church.

The news comes just days before the Pope is scheduled to meet with the International Union of Superiors General, who three years ago petitioned him to appoint a commission to study the question of women deacons. It also confirms LifeSite’s report in March on the findings of that commission.

During an inflight press conference on his return from a May 5-7 apostolic visit to Bulgaria and Macedonia on Tuesday, the Pope was asked what he had learned from the commission’s report and if he had come to any decisions.

The Pope said the commission he appointed two years ago to study the role of women in the early Church did not reach an agreement on the question of female deacons.

“They were all different, all toads from different wells,” he quipped. “Everyone thought differently, but they worked together, and they agreed up to a certain point. But then each of them has his/her own vision which isn’t in agreement with the others. And they stopped there as a commission, and each one is studying on his/her own to go forward.”

The Pope said one of the most disputed points is whether deaconesses in the early Church can be understood “with the same vision” as the ordained male diaconate.

He said that, according to the commission, “the formulae of ordination for the [female] diaconate found until now are not the same as for the male diaconate and are more similar to what today would be the abbatial blessing of an abbess.”

“There were deaconesses in the beginning,” he said, but the question is whether “it was a sacramental ordination or not.” Expounding on the commission’s findings, he said:

They helped, for example, in the liturgy of baptism, which was by immersion. When they baptized a woman the deaconess assisted. They also assisted for the anointing of the woman’s body. Then a document came out that showed the deaconess was called by the bishop when there was a marital dispute, for the dissolution of the marriage or the divorce or separation. When the woman accused her husband of having hit her, the deaconesses were sent by the bishop to look at her body for bruises, and so they testified for judgment.

“What is fundamental,” the Pope explained, “is that there is no certainty that there was ordination with the same form and finality as male ordination.” He added that some of the commission members continue to dispute this.

“Let us go forward. I am not afraid of study, but up to now it’s hasn’t been shown.”

Pope Francis also noted how “curious” it is “that, where there were deaconesses, it was always in a particular geographical region – especially Syria — and then in other regions not so much, or not at all.”

“I received all these things from the commission,” he said. “They did a good work, because they arrived at a certain point in common, and this can serve as the impetus for go forward to study and give a definitive ‘yes’ or ‘no’ answer according to the characteristics of the age.”

The Pope then pointed out something he found particularly interesting. “No one talks about it, but some theologians a few years ago, thirty years ago, said there were no deaconesses because women were second class in the Church — and not only in the Church. But it’s interesting, at that time there were a lot of pagan priestesses. The female priesthood in the pagan cults was the order of the day.”

“How do we understand that there was this pagan female priesthood — priesthood — and you didn’t see it in Christianity. This is also being studied,” he said.

The Pope concluded his inflight comments on the question of women deacons, saying “each member is studying according to his or her own thesis. This is good. Varietas dilectat! — Variety is the spice of life.”

Check back with LifeSite in coming days for coverage of Pope Francis’s address to the International Union of Superiors General.