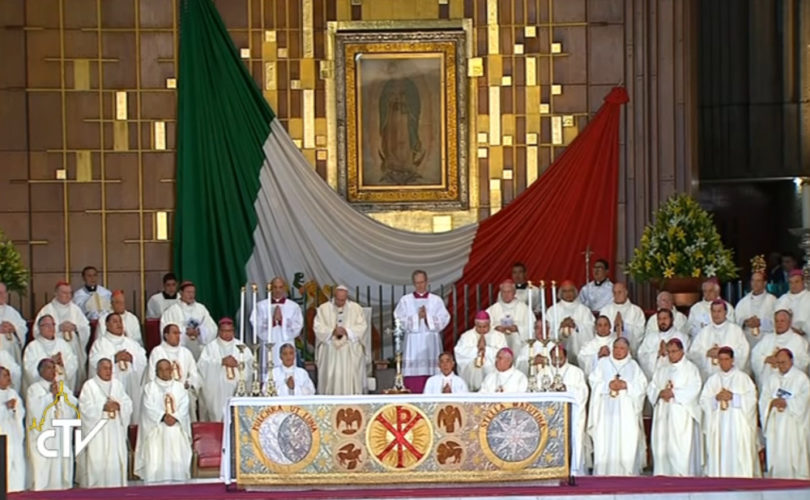 REIMS, France (LifeSiteNews) — A French archbishop reported that Pope Francis wants priests devoted to the Traditional Latin Mass to concelebrate the new rite at least once a year.

According to an article published in French magazine Famille Chrétienne last Thursday, Pope Francis received the leadership of the French Bishops’ Conference in Rome just a few weeks after their Spring Plenary Assembly in Lourdes.

On this occasion, the topic of the controversial motu proprio Traditiones Custodes, with which the Pontiff imposed severe restrictions on the celebration of the Traditional Latin Mass (TLM), was brought to the table so that Pope Francis could clarify certain points.

According to bishops at the meeting, the Pope began by recalling “emphatically” that the decree of February 11, according to which priests of the Priestly Fraternity of Saint Peter (FSSP) are not affected by the restrictions of the motu proprio and may continue to celebrate Mass according to the Roman Missal of 1962, came from him.

Immediately afterward, however, Pope Francis emphasized the second paragraph of this decree, which states that FSSP priests “may use this faculty in their own churches or oratories” only, and that, otherwise, the 1962 missal “may only be used with the consent of the Ordinary of the place, except for the celebration of private Masses.”

According to Monsignor de Moulins-Beaufort, the Archbishop of Reims and head of the French Bishops’ Conference, Francis also insisted that all priests, regardless of their affiliation, must concelebrate at the annual Chrism Mass.

“He was very insistent that priests concelebrate at least the Chrism Mass,” De Moulins-Beaufort said.

The Chrism Mass takes place during Holy Week and is an occasion for the priests of a diocese to renew their promises to their local bishop and to manifest the unity of the Catholic Church.

From this, it appears that Pope Francis sees participation to the Chrism Mass as an obligation for priests, an idea that seems to clash with Canon 902 of the Code of Canon Law, as was pointed out in an article by German Catholic news outlet Katholisches.info.

Canon 902 states that every priest always retains the right to exercise his freedom to celebrate the Eucharist individually.

The Pope’s alleged insistence on concelebration at the Chrism Mass during his meeting with the French bishops appears to validate the actions of the now-Emeritus Archbishop Roland Minnerath of Dijon, who unceremoniously evicted the FSSP from his diocese last year, arguing that some of its priests refused to concelebrate at the Chrism Mass.

Since the publication of the motu proprio Traditiones Custodes last July, a great deal of confusion still remains as to how the decree applies. Its interpretation and application often depend upon the personal disposition of a given local bishop toward the TLM.

In the Diocese of Rome, for instance, the two decrees now in place contradict each other.

On Oct. 7, 2021, Cardinal Vicar Angelo De Donatis issued a decree banning the faithful from attending the Easter Triduum in the traditional rite in the personal parish of the Fraternity of St. Peter. This seems to contradict Pope Francis’ own decree of February 11 exempting the FSSP from restrictions.

This year, the FSSP in Rome interpreted the Pope’s decree as superior and celebrated the Easter Triduum according to the old rite at the church of Santissima Trinità dei Pellegrini, Katholishes.info reported.

Another point that remains to be clarified is the fate of other Ecclesia Dei communities such as the Institute of Christ the King and the Institute of the Good Shepherd. So far, Pope Francis has given no indication that he intends to extend his February 11 exemption to these communities.

These communities were not discussed at the meeting between Francis and the French bishops.

According to Famille Chrétienne,  neither was mention made of the Via Romana, an initiative undertaken by mothers of priests who celebrate the TLM and who have been walking from Paris to Rome for weeks now to present Pope Francis with letters from the faithful, asking him to reconsider his motu proprio.