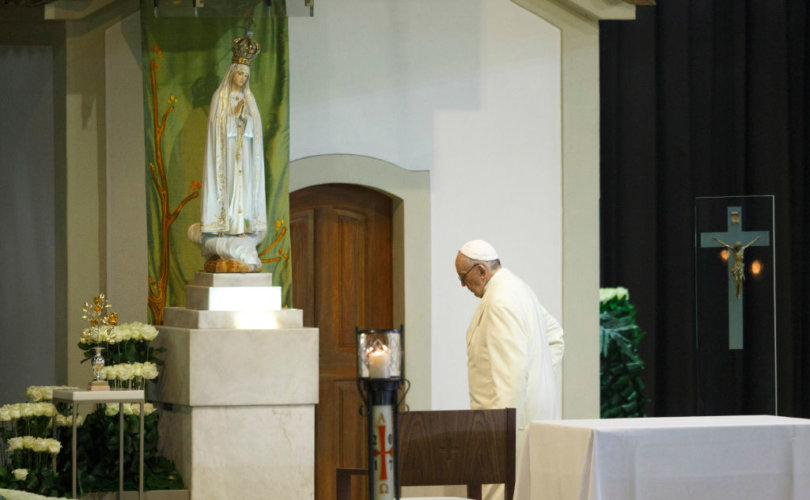 Pope Francis before the statue of Our Lady of Fatima, on May 12, 2017 in Fatima, Portugal. Pablo Blazquez Dominguez/Getty Images

VATICAN CITY (LifeSiteNews) –Pope Francis has invited all the Catholic bishops in the world to consecrate Russia and Ukraine to the Immaculate Heart of Mary on March 25.

I confirm that Pope Francis has invited the bishops of the whole world and their presbyters to join him in praying for peace and in consecrating and entrusting Russia and Ukraine to the Immaculate Heart of Mary. The occasion, as indicated in recent days, will be the Celebration of Penance, scheduled at 5pm on Friday 25 March, the Feast of the Annunciation, in St Peter’s Basilica.

Matt Gaspers of Catholic Family News revealed Thursday that the Pope had invited the world’s bishops to unite with him in consecrating Russia and Ukraine to the Immaculate Heart of Mary. He produced a letter from the Apostolic Nuncio to the United States, addressed to the U.S. Conference of Catholic Bishops President Archbishop Jose H. Gomez

“The Holy Father intends to invite each Bishop, or equivalent in law, together with his priests, to join in this act of consecration, if possible, at an hour corresponding to 5pm Rome time,” the nuncio wrote.

“In the coming days, the Holy Father will address a letter of invitation to the Bishops, enclosing the text of the Prayer of Consecration in the various languages. I write now, asking you to inform the members of the USCCB and, through them, the priests of the various dioceses and eparchies of the country, about the Holy Father’s invitation.”

JUST IN: Pope Francis intends to invite each bishop together with his priests to join the act of consecration of Russia & Ukraine to the Immaculate Heart of Mary, March 25. In coming days, he will send an invitation & prayer of consecration, says letter of Apostolic Nuncio to US. pic.twitter.com/K1pUnavsT6

Gaspers noted that while the papal invitation to the bishops “is obviously not the same as an ‘order,’ which is what Our Lady specified, it is nonetheless a positive sign.”

“Let us keep praying and fasting for the consecration to be done according to Heaven’s specific conditions,” he said.

The Holy See made its initial shock announcement March 15, revealing that Pope Francis would consecrate Russia and Ukraine to the Immaculate Heart of Mary on March 25, following a heartfelt appeal made to the Pontiff from Ukraine’s Catholic bishops. The bishops begged the Holy Father to consecrate Russia and Ukraine “as requested by the Blessed Virgin in Fatima,” to bring an end to the current conflict.

Following the Vatican’s March 15 announcement, Catholics across the world issued calls for the bishops to join the Pope in making the consecration, in order to fill the request of Our Lady of Fatima. Ukrainian Catholic prelates revealed they would join the Pope and called on brother prelates around the world to do likewise.

Latin America’s Catholic Bishops’ Conference also added their voices to those of the Ukrainian prelates, as did Tyler’s Bishop Joseph Strickland, along with the Catholic bishops of the Philippines. LifeSiteNews understands that the U.K.’s Cardinal Vincent Nichols had also decided to join the Pope’s consecration.

Controversy over the consecration has been stirring with some arguing that it has already taken place in 1984, at the hands of Pope John Paul II. Yet while the Polish Pope did make an “entrustment-consecration” of the world, including Russia, to the Immaculate Heart of Mary, he deliberately avoided making the explicit mention of Russia as Our Lady had requested. This fact was attested to by Cardinal Paul Josef Cordes in 2017, and Father Gabriel Amorth, the former chief exorcist of Rome.

The precise request made by Our Lady to Sister Lucia dos Santos in July 1917 and then in 1929 was for the explicit consecration of Russia to her Immaculate Heart:

… I shall come to ask for the consecration of Russia to my Immaculate Heart, and the Communion of reparation on the First Saturdays. If my requests are heeded, Russia will be converted, and there will be peace; if not, she will spread her errors throughout the world, causing wars and persecutions of the Church. The good will be martyred; the Holy Father will have much to suffer; various nations will be annihilated. In the end, my Immaculate Heart will triumph. The Holy Father will consecrate Russia to me, and she shall be converted, and a period of peace will be granted to the world.

Our Lady of Fatima repeated the request in 1929, when she appeared to Sr. Lucia saying: “The moment has come in which God asks the Holy Father to make, and to order that in union with him and at the same time, all the bishops of the world make the consecration of Russia to My Immaculate Heart, promising to convert it because of this day of prayer and worldwide reparation.”

Bishop Athanasius Schneider has composed a prayer to be said every day in preparation for the consecration, noting that the consecration would be “a powerful instrument for Divine Providence to pour out those special graces which the Church and the world so urgently need.”

O Immaculate Heart of Mary, Holy Mother of God and our most tender Mother. Look down upon the distress in which the Church and all humanity finds itself due to the spread of godlessness, materialism and the persecution of the Catholic Faith, errors of which you warned in Fatima.

You are the Mediatrix of all graces. Obtain for us the grace that all the bishops of the world, in union with the Pope, may consecrate Russia and Ukraine to Your Immaculate Heart on March 25, 2022. By this consecration we hope – as you told us in Fatima – that, at a time appointed by God, Russia will be converted, and mankind will be granted an era of peace. We hope that by this consecration, the triumph of Your Immaculate Heart will soon draw near and the Church will be authentically renewed in the splendor of the purity of the Catholic Faith, the sacredness of the liturgy and the holiness of the Christian life.

O Queen of the Holy Rosary and our most tender Mother, turn Your merciful eyes toward the Pope, the bishops and each of us, and graciously hear our fervent and trusting prayer. Amen.