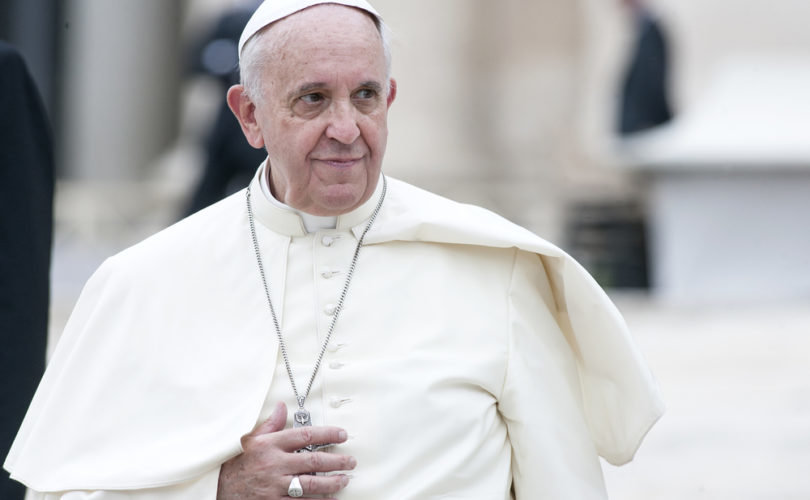 ROME, May 10, 2019 (LifeSiteNews) — Pope Francis on Thursday issued an apostolic letter that requires all priests and other religious to report to their superiors any credible accusations of clerical sexual abuse and cover-ups.

The Pope’s motu proprio is titled “You are the Light of the World” (Vos estis lux mundi), which is taken from the Gospel of Matthew and makes mandated reporters of the more than 415,000 priests and more than 700,000 religious women around the world. The document requires them to inform Church authorities when they become aware or have “well-founded motives to believe” that a member of the clergy or a female religious has sexually abused a minor or possessed child pornography, or when a superior has covered up any such crimes. It does not require that they report allegations to civil authorities.

The new law further provides whistleblower protections for those reporting on sexual abuse while also requiring dioceses to put systems into place by June 2020 to receive confidential allegations. Another key point in the new document is that it provides procedures for pursuing investigations when the accused is a bishop, cardinal, or religious superior. In the past, victims and accusers have complained that investigations against the hierarchy have languished, as was the case with the now disgraced former cardinal Theodore McCarrick.

Cardinal Marc Ouellet of Canada, who leads the Vatican office for bishops, gave an interview to accompany the release of the new law. According to the AP, he said: “We have said for years that priests must conform to certain strict rules, so why shouldn’t bishops and others in the hierarchy do the same?” Cardinal Ouellet added, “It’s not just a law, but a profound responsibility.”

Following the annus horribilis of 2018, which saw the laicization of former cardinal Theodore McCarrick among other scandals, Pope Francis is taking further steps to combat clerical abuse while emphasizing concrete action. The pope says at the beginning of the apostolic letter, “In order that these phenomena, in all their forms, never happen again, a continuous and profound conversion of hearts is needed, attested by concrete and effective actions that involve everyone in the Church.”

Pope Francis recalled in the document that “crimes of sexual abuse offend Our Lord, cause physical, psychological and spiritual damage to the victims and harm the community of the faithful.” He called on the clergy to fight these crimes, in what is seen as a result of the February 2019 Meeting on the Protection of Minors held in the Vatican.

While the new law does not require clerics and religious sisters to report allegations to police, it does require that they obey local civil reporting requirements. It also indicates that reporting to Church authorities should in no way interfere with a civil requirement and provides universal norms, which apply to the whole Catholic Church.

The new law is procedural and not criminal in nature. It can be applied retroactively, thus requiring clerics and sisters to report old cases of sexual misconduct and cover-ups. In years past, reporting was a matter of conscience for clerics and religious. With the new motu proprio, it becomes Church law.

That said, the new law does not prescribe any punishments for failure to report abuse, and there are no sanctions so far for dioceses that fail to comply. However, failure to comply could bring about accusations of negligence or cover-up. The new norms “apply without prejudice to the rights and obligations established in each place by state laws, particularly those concerning any reporting obligations to the competent civil authorities.”

The motu proprio defines reportable sex crimes as sex acts with minor or vulnerable persons; forcing adults “by violence or threat or through abuse of authority, to perform or submit to sexual acts”; and child pornography. The document defines a cover-up as “actions or omissions intended to interfere with or avoid” civil or canonical investigations.

Violence against novices and seminarians must also be reported. Although the word “seminarian” does not appear in the document, Cardinal Ouellet explained that “in addition to the abuses against minors and vulnerable adults, it also refers to molestation or violence through abuse of authority: this means that cases of the abuse of religious by clerics, or abuse of seminarians or novices by their superiors are also included in the regulations.”

The pope also required that victims must be given support by the Church hierarchy, as well as assistance that includes medical, psychological, and spiritual guidance. Financial reparations are not contemplated in the document.

When there are claims of sexual misdeeds or cover-up laid against a bishop, religious superior, or Eastern Rite patriarch, they must be reported to the Holy See and the metropolitan bishop, who has responsibilities beyond the geographic area of his dioceses alone. Unless the metropolitan finds that a claim is “manifestly unfounded,” he must immediately ask permission from the Vatican to begin an investigation. The new law requires a turnaround response from the Vatican within an unprecedented 30 days — unusual for the remarkably lethargic Vatican bureaucracy. Then the metropolitan has 90 days to conduct an initial investigation, subject to extension. Lay experts can be consulted by the bishops investigating abuse.

Once the metropolitan’s investigation is brought to a close, it is sent to the Vatican for instructions. Procedures already exist for further investigation of and sanctions on bishops. The law requires Vatican offices to share information, despite a centuries-old tradition of files and authority jealously guarded by the various congregations and dicasteries.