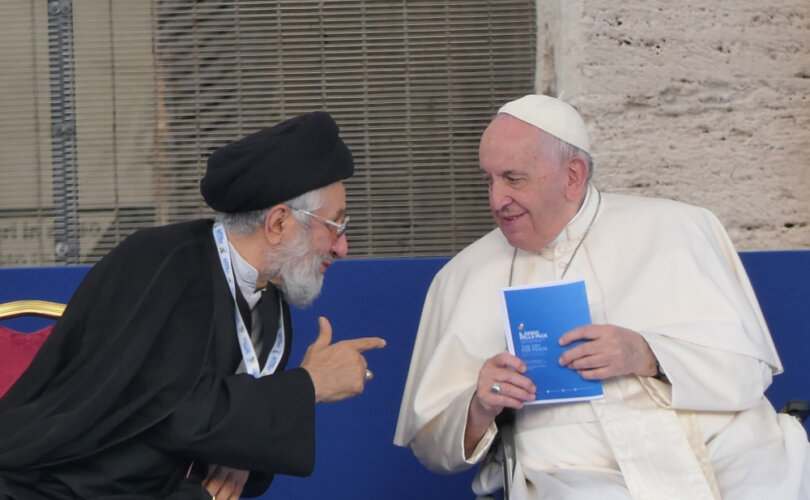 VATICAN CITY (LifeSiteNews) – Pope Francis joined numerous ecumenical leaders on Tuesday at the Colosseum to take part in an interfaith prayer meeting entitled “The Cry for Peace,” which was held in the “spirit of” the 1986 inter-religious meeting led by John Paul II at Assisi.

Pope Francis closed the three-day conference on its last day, taking part in two key events. Inside the Colosseum, he joined ecumenical leaders for a prayer service, then outside the ancient walls of the Colosseum he joined leaders from various religions, including Islam, Judaism, Hinduism, Buddhism, Sikhism, on the stage.

It was organized by the Community of Sant’Egidio, based in the Trastevere district of Rome. The conference is the 36th such meeting, following John Paul II’s notorious 1986 inter-religious meeting at Assisi.

Delivering speeches at the various roundtables during the conference were a host of leading figures in both ecclesial and political spheres, including:

The Sant’Egidio community itself is noted to hold a favorable position in Pope Francis’ Vatican, with Zuppi a longtime supporter and ecclesiastical general to the group. Matteo Bruni – also a longtime member of the Community – is the Holy See Press Office director.

Pope Francis has attended the past three events, and at last year’s he called for “peace … fraternity … vaccines” in an event that focused on a call for more COVID-19 injections.

Drawing on Fratelli Tutti and signing of ecumenical pact

Addressing the ecumenical leaders and some hundreds of participants outside the Colosseum, Francis echoed the cry for peace, warning against nuclear war.

In doing so, the Pope – and other speakers – quoted from his controversial encyclical “Fratelli Tutti.”

Addressing the participants, Francis referenced the “fraternal relations between religions [which] have taken decisive steps forward,” adding that “more and more, we feel that we are all brothers and sisters!”

That text of Francis’s has been described by former Papal Nuncio to the U.S. Archbishop Carlo Maria Viganò as promoting a “blasphemous” form of brotherhood without God and pushing “religious indifferentism.”

Viganò added that “religious indifferentism, implicitly promoted in the text Fratelli Tutti, which defines as ‘a good for our societies’ the presence of any religion – instead of ‘the liberty and exaltation of Holy Mother Church’ – denies in fact the sovereign rights of Jesus Christ, King and Lord of individuals, of the societies and of nations.”

After the pope’s speech, the assembled leaders followed his lead in signing an “Appeal for peace 2022,” which called upon political leaders to promote peace. While it was addressed from “the representatives of the Christian Churches and World Religions,” the Appeal did not reference religion.

‘Spirit of Assisi’ guiding the event

Speaking outside the Colosseum, Sant’Egidio president Marco Impagliazzo referenced the “spirit of Assisi” to be embodied at the event.

Indeed, the annual conference is modeled on the “scandalous” inter-religious 1986 Assisi meeting at which Pope John Paul II prayed together with Orthodox Christians, Protestants, Jews, Muslims, Hindus, Buddhists and representatives of many other religions.

As last year, the event’s logo was a swirling, seven colored rainbow flag topped with a white dove.

Speaking to gloria.tv two years ago, Bishop Athanasius Schneider stated that the 1986 Assisi meeting was a “preparation” for the worship of the Pachamama statues in the Vatican Gardens, as it accustomed Catholics to the “erroneous teaching … that all religions are on the same level.”