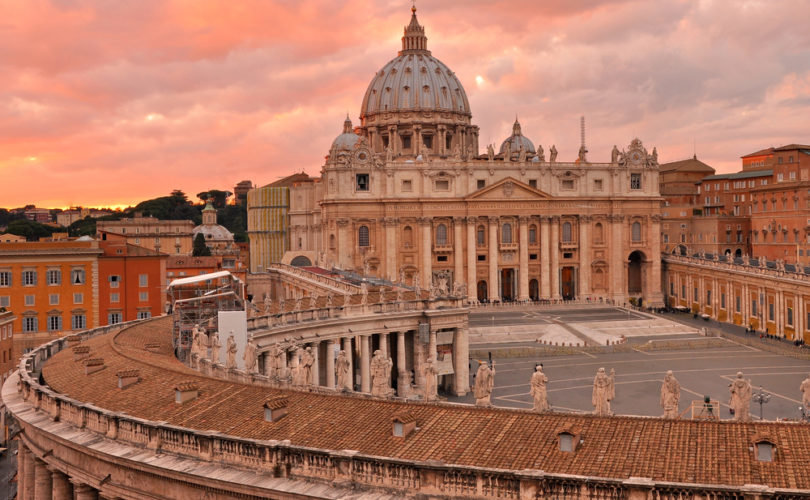 June 17, 2015 (LifeSiteNews) — Officially speaking, the original Italian version of Laudato Si’, which had been placed between covers, sent to the Vatican publishing house for printing in different languages, and was rolling off the presses sometime last week does not exist.  Nor, any longer, do the press credentials of the renowned Vaticanist Sandro Magister. In a stunning disciplinary action by the Vatican Press Office, they were revoked after he leaked a copy of the ill-fated “draft” to the press (there not yet being any embargo in effect).

Whatever the reason for the unprecedented reported destruction of a papal encyclical in the process of being printed, the document I have read for purposes of summarizing it for LifeSiteNews today is essentially a matter of purely historical interest that may or may not be substantially superseded by the corrected final version. Only a line-by-line comparison will tell.  Meanwhile, however, the document before me is as unprecedented in content as the manner in which it was recalled and expunged.

It is impossible to provide an adequate synthetic description of Laudato Si (LS) because it is effectively a composite of multiple documents between the same covers, running to book length. In its six chapters, LS attempts to combine numerous disparate elements under the theme of an “ecological crisis”:

In terms of the details there is good news and—as widely feared—a great deal of bad news.

First the bad news: in LS Francis has committed himself to the “climate change” narrative and its related dubious science. There is simply no question of this.  In Chapter 1, and thematically throughout its 184 pages of main text, LS accepts as established fact that human activity is primarily responsible for, among other things:

As Francis opines (¶ 24-25): “If the current tendency continues, this century could bear witness to unheard of climate changes and unprecedented destruction of ecosystems, with grave consequences for all of us. … Climate changes are a global problem with grave environmental, social, economic, distributive and political consequences, and constitute one of the principal current challenges for humanity.”

In related bad news, Francis endorses the climate-change establishment’s demand for the elimination of the use of fossil fuels (¶¶ 26, 165) and declares the existence of a moral obligation to reduce greenhouse gasses (¶169). He also endorses such secularist-globalist environmental manifestos as the Earth Summit (¶ 167), the Vienna Convention and Montreal Protocol regarding the supposed threat to the ozone layer (¶ 168), and the Earth Charter (¶ 207), all of which favor the expansion of governmental power to no good effect on the environment.

Worse, as concerned Catholics feared, LS, citing the failure of world leaders to act decisively on climate change and “global inequality,” explicitly calls for the creation of global authorities with enforcement powers to address these putative crises:

There is bad news on the theological front as well.  This description of man (¶ 81) is troubling to say the least:

The human being, supposing also evolutionary processes, involves a novelty not fully explainable by the evolution of other open systems.  Every one of us has in itself a personal identity able to enter into dialogue with others and with God Himself.  The capacity for reflection, reasoning, creativity, interpretation, artistic elaboration, and other original capacities demonstrate a singularity that transcends the scope of the physical and biological. The qualitative novelty involved in the emergence of a personal being within the material universe presupposes a direct action of God, a peculiar calling to life and to the relation of a Thou to another you.

There is no reference anywhere in the 246 paragraphs of the main text to the rational soul of man, which is what sets him apart from, and places him above, all the lower animals and invests him with dominion over the Earth. (Only footnote 141 mentions the soul in passing.) This view of man as a “qualitative novelty” that has “emerged” from the evolution of “other open systems” lends itself to an ecology that displaces his God-given dominion in favor of a subtle subordination to the created order, with the traditionally understood divinely conferred dominion now to be considered “simplistic” (¶ 69).

More thematically, the posited “ecological crisis”—broadly defined to include not only the environment but also social, political and economic “inequality” and a generalized ethical malaise arising from rampant consumerism and self-centeredness—is nowhere clearly linked to a civilization-wide abandonment of the life of the Christian oriented to eternity and submissive to the Church.  LS’s call for the novelty of “ecological conversion” (¶¶ 216-221) does not propose a civilizational return to the Law of the Gospel as counseled by the Church’s social teaching spanning centuries.

The Church’s role in LS is that of a provider of polite, non-religious suggestions about what men and nations should do, with Francis even posing the question: “Why insert in this document, addressed to all persons of good will, a chapter related to the convictions of faith?”  That Francis views “the convictions of faith” as an “insertion” into a papal encyclical is a rather telling indication of the state into which the Church has fallen.

This approach is in stark contrast to the social encyclicals of former Popes, which resoundingly affirmed the indispensable role of the Church and the Gospel in preserving civilization.  For example, as Pius XI declared in his landmark encyclicals:

“Wherefore,” to use the words of Our Predecessor [Leo XIII], “if human society is to be healed, only a return to Christian life and institutions will heal it.” For this alone can provide effective remedy for that excessive care for passing things that is the origin of all vices; and this alone can draw away men’s eyes, fascinated by and wholly fixed on the changing things of the world, and raise them toward Heaven. Who would deny that human society is in most urgent need of this cure now?  (Quadragesimo anno [1931], n. 129)

Because the Church is by divine institution the sole depository and interpreter of the ideals and teachings of Christ, she alone possesses in any complete and true sense the power effectively to combat that materialistic philosophy which has already done and, still threatens, such tremendous harm to the home and to the state….

The Church is the teacher and an example of world good-will, for she is able to inculcate and develop in mankind the “true spirit of brotherly love”….  Finally, the Church is able to set both public and private life on the road to righteousness by demanding that everything and all men become obedient to God “Who beholdeth the heart,” to His commands, to His laws, to His sanctions. (Ubi Arcano Dei [1922], nn. 41-42).

And yet, that said, the final eight pages of LS present an admirable discourse on the Holy Eucharist as a cause of unity among men, the signs of the Holy Trinity in Creation, and the Reign of Mary as Queen of Heaven.  But the impression, sad to say, is that of a Catholic spiritual “supplement” appended to a thematically humanist document eschewing any explicitly Catholic approach to the “ecological crisis.”  This is seen even in the closing prayers: a non-denominational prayer for “Our Earth,” followed by a “Christian Prayer with [?] Creation,” which begins: “We praise You, Father, with all of your creatures…”

But now the good news, which is not inconsiderable:

There are other serious issues with this massive text, both theological and political (e.g., presentation of “biological evolution” as fact, a nod to the evolutionary eschatology of Teilhard de Chardin, vague calls for “new models” of development, production and even culture), but these are for another time and another forum.

All in all, however, it has to be said that the world will ignore the good elements in LS and proclaim a great victory for climate change fanatics—a victory Francis will undoubtedly have given them unless the final official version of LS departs substantially from the mysteriously withdrawn and destroyed “draft.”  Let us hope and pray that, tomorrow morning, we will find that it does.