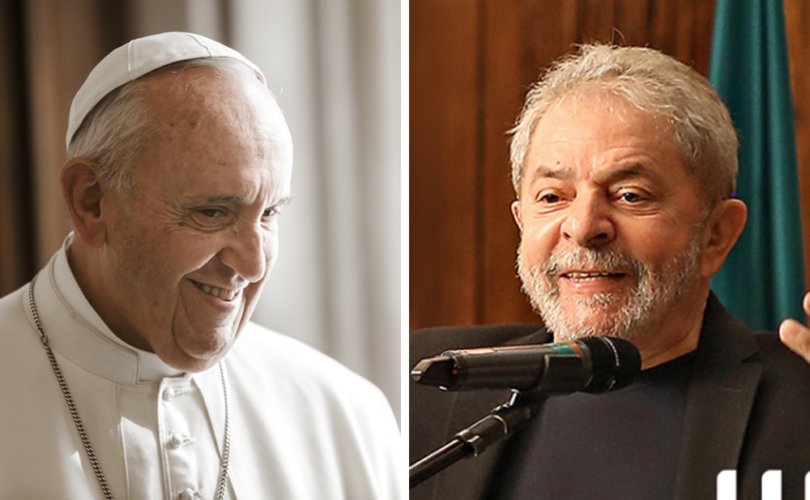 August 16, 2018 (LifeSiteNews) – Pope Francis has recently met in Rome with some of the allies of the former Brazilian President Luiz Lula da Silva, who is now jailed for corruption. The Pontiff expressed his support for Lula da Silva, even allegedly comparing his imprisonment with the persecution of Jesus Christ.

On 2 August, Pope Francis welcomed three allies of Lula da Silva, former Brazilian Minister of Defense and Foreign Affairs Celso Amorim, former Argentine Minister Alberto Fernandez, and Chilean Minister Carlos Ominami. At that meeting, the Pope spoke with his guests about the situation of the former President of Brazil who ruled eight years from 2003 until 2011. The supportive delegation called attention to the plight of Lula, who is now imprisoned for his corruption which his supporters claim to be an unjust form of “lawfare.”

In response to this meeting, which lasted unusually long – one hour – Pope Francis himself wrote a note in support of Lula da Silva who had been a strongly pro-abortion and pro-homosexual President.

The Pope wrote: “To Luiz Inacio Lula da Silva with my blessing, asking him to pray for me, Francisco.” Lula da Silva immediately posted this hand-written note on his own Twitter account.

As Carlos Ominami reported a day after this 2 August meeting with Pope Francis, the pontiff, when speaking with his guests about the situation of the former President of Brazil, compared his plight with that of Jesus Christ. He said, according to Ominami:

Truth be told, the Pope was not particularly surprised. To my amazement, he told us that this was a very old story, so much so that it was in the Bible. In his own way, this had happened to Jesus Christ, St. John and Susan of Babylon.

This papal comment had been elicited by the delegation's own description of the purported unjust legal treatment of Lula da Silva, but also because of  the “obligation to defend, in Brazil and throughout our region, a democracy that we have had so much trouble achieving.” Pope Francis, claims Ominami, also himself made a reference back to a 17 May 2018 homily of his in which he was specifically speaking about coups d'état.

Lula da Silva had been arrested in April of 2018 because of corruption charges and he has subsequently been sentenced to twelve years imprisonment. As the German Vatican specialist Giuseppe Nardi reports, Lula da Silva's allies consider his imprisonment to be an injustice, and they are trying to get him re-elected as President so that he may gain juridical immunity and thus would have to be released from prison.

And indeed, on 14 August 2018, Lula da Silva published an op-ed in the New York Times, speaking about a “a Right-Wing Coup Underway in Brazil.” He continues, saying: “With all the polls showing that I would easily win this October’s elections, Brazil’s extreme right wing is seeking to knock me out of the race.”

Only two days after the papal support for Lula da Silva, his Worker's Party announced on 4 August that it named him as its nominee for the presidential elections.

As Giuseppe Nardi comments, “possibly never before has a pope so openly and so partially supported one political party.” In this case, it is the left that the Pope is endorsing.

As LifeSiteNews had earlier reported, President Lula da Silva had strongly supported the cause of homosexuals and of abortionists in Brazil. In his last year in public office, he issued a legislative reform initiative securing abortion as a “human right” and imposing socialist and homosexual ideologies in schools and in the media. He also intended to ban crucifixes from all official government buildings. Lula da Silva spent millions of dollars for pro-homosexual causes and even introduced pro-homosexual educational materials for young children as young as 7 to 12 years of age.

This is not the first time that Pope Francis has publicly endorsed public figures who work against the Catholic Church's moral teachings. Most famous is his 2016 praise of Emma Bonino, the Italian pro-abortion activist, as well as his continuous welcoming of Jeffrey Sachs to the Vatican. Jeffrey Sachs has repeatedly given talks at Vatican conferences during Francis' pontificate, even though Sachs is known to be a global supporter of abortion and population control.