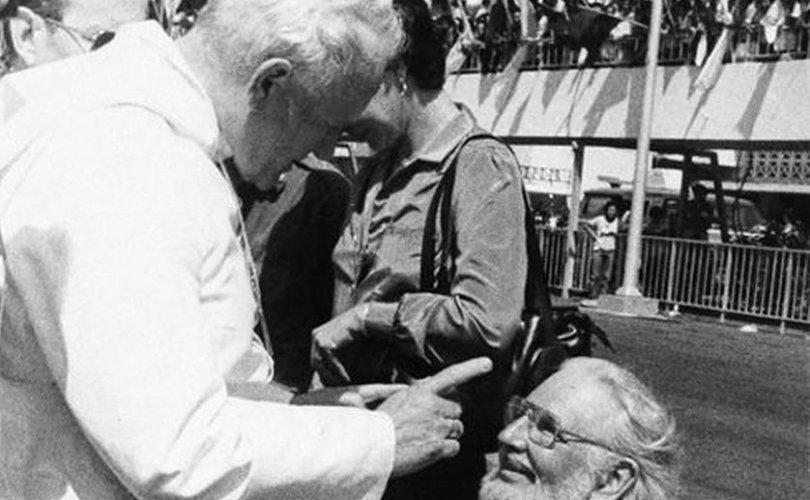 MANAGUA, February 18, 2019 (LifeSiteNews) — Without any sign of public repentance on the part of Ernesto Cardenal, Pope Francis has lifted 1984 canonical sanctions imposed by Pope St. John Paul II against the communist Nicaraguan priest. In 1983, Pope John Paul II famously publicly chastised Cardenal because of the latter’s Liberation Theology and  involvement in the leftist revolutionary Sandinista government of Nicaragua which was restricting the Church.

As recently as 2015, Cardenal praised Pope Francis while reviling his predecessors. In an interview with El Pais, Cardinal was elated that Pope Francis is leading a “revolution,” unlike his two “disastrous” predecessors. “The two popes prior to Francis were disastrous popes, who made the church retreat by centuries,” he said.

Cardenal, the scion of a wealthy and politically-connected family, remains unrepentant for his Marxist views.

The 94-year-old Cardenal is being treated in a hospital for renal failure and is reportedly at the point of death. Even before the lifting of the papal sanction, which had prohibited Cardenal from administering the sacraments.

Bishop Silvio José Báez visited the ailing priest and knelt for his blessing at his hospital bed. “I ask for your blessing as a priest of the Catholic Church,” the bishop said. Báez posted on Twitter a photo of himself kneeling beside Cardenal juxtaposed with the famous 1983 image of Pope John Paul II wagging an admonitory finger at the kneeling Cardenal.

The Nicaraguan bishop also posted a tweet showing a copy of the letter from papal nuncio Stanislaw Waldemar Sommertag announcing the change.

Papal Nuncio Sommertag, for his part, has offered to concelebrate a Mass with Cardenal, which will be the first for the leftist priest in 35 years.

The letter from the nuncio read:

“The Holy Father has benevolently granted the absolution of all the canonical censures imposed on the Reverend Father Ernesto Cardenal, accepting the request that he had recently presented to him through the Pontifical Representative in Nicaragua, to be readmitted to the exercise of the priestly ministry.

“Father Cardinal has been 35 years under suspension of the exercise of the ministry due to his political militancy. The cleric accepted the canonical penalty that was imposed on him that he has always followed, without carrying out any pastoral activity. In addition, he had abandoned all political commitments for many years.”

In 1983, Pope John Paul II flew to Nicaragua from Mexico, where he had specifically condemned the so-called Theology of Liberation, which had its roots in Latin America and of which Cardenal was a principal exponent.

When the pope greeted a queue of Sandinista officials, Cardenal genuflected and tried to kiss the papal ring. Pope John Paul pulled his hand away, telling Cardenal “First you must be reconciled with the Church!”

After losing his faculties as a priest, Cardenal continued to serve on dictator Ortega’s cabinet until 1987. Since then, he has been largely occupied as a poet and artist at his commune retreat on the Solentiname Islands in Lake Nicaragua.

A change in Cardenal’s fortunes came in 2016 during Pope Francis’ visit to Mexico. A Spanish journalist brought a book of the priest’s poems to the Pope. The book had a dedication to the Pope from Cardenal, along with a letter. In the book was included an interview in which Cardenal paid homage to his fellow Latin American. “I feel completely identified with this new Pope. He is better than we could have imagined.”

Once he received the book, the Pope said he would read it. While Cardenal’s health deteriorated, the Pope’s response came on Feb. 14 informing him of the lifting of sanctions.

For Cardenal, the recent controversial statement of Pope Francis pushing religious pluralism would have been a joy. When asked in the 2015 interview if religions were fulfilling their role, Cardenal replied, “No way. They will fulfill it when all religions unite with one another, each one with its believes within a religious pluralism.”

1
LGBT agenda full speed ahead thanks to Pope Francis’ recent remarks on homosexuality
2
Police arrest Canadian teens at Freedom Convoy anniversary rally after altercation over flag
3
MIT analytics expert calls for end to mRNA COVID shots: ‘No other ethical or scientific choice’
4
Mark Houck acquitted on both charges in major pro-life victory
5
‘We will say no’ to legalized sodomy: African politician objects to Pope’s remarks before visit
Subscribe to Daily Headlines »