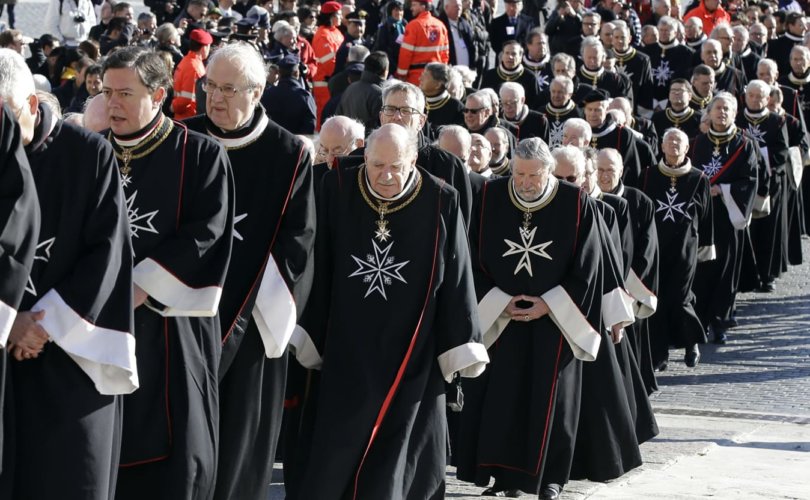 VATICAN CITY (LifeSiteNews) — Pope Francis dissolved the current leadership and constitution of the Sovereign Order of the Knights of Malta on Saturday, September 3, establishing a new Sovereign Council and Constitutional Charter for the medieval military religious order, which is also a sovereign country.

According to Vatican News, “The Decree establishes the new Constitutional Charter and related Melitense Code of the Order, taking effect immediately, the revocation of the High Offices, and the dissolution of the current Sovereign Council governing the Order. The Decree also names a provisional Sovereign Council whose members are Fra’ Emmanuel Rousseau, Grand Commander; Riccardo Paternò di Montecupo, Grand Chancellor; Fra’ Alessandro de Franciscis, Grand Hospitaller; Fabrizio Colonna, Receiver of the Common Treasure. The directive also calls for an Extraordinary Chapter General on 25 January 2023, the feast of the Conversion of St. Paul.”

RELATED: Pope’s reform could threaten the very heart of the Knights of Malta

The Knights of Malta have had a turbulent recent history. In December 2016, then-Grand Master Fra Matthew Festing dismissed Grand Chancellor Baron Albrecht von Boeselager for his involvement in a program that distributed condoms. As LifeSiteNews reported at the time, “Von Boeselager oversaw the distribution of condoms and oral contraceptives while he was Grand Hospitaller, the person in charge of the charitable work of the Order, through its international charity Malteser International. He was also at the time a member of Malteser International’s board.”

According to former Knight Henry Sire, author of The Dictator Pope, after Boeselager was dismissed from the Order by Festing, he “got Cardinal (Pietro) Parolin, the Vatican Secretary of State, to intervene and annul the Order’s acts.” Then in January 2017, Pope Francis personally intervened, ordering Fra Matthew to resign as Grand Master while Boeselager was reinstated as Grand Chancellor. The Pope also appointed Archbishop, now Cardinal, Giovanni Angelo Becciu as special delegate of the Holy See to the Order, assigning him tasks that ordinarily belonged to the Patron of the Order, at the time, Cardinal Raymond Burke.

— Article continues below Petition —
PETITION: We won't give any money to liberal bishops who attack the Faith
Show Petition Text
10284 have signed the petition.
Let's get to 12500!
Thank you for signing this petition!
Add your signature:
Show Petition Text

RELATED: Cardinal Burke criticizes acting Knights of Malta head for ‘calumny’ against him

A series of highly questionable hierarchical changes were imposed in several provinces of the Knights of Malta within the first several months of Boeselager’s reinstatement. Then in late April 2017, the Order elected an interim leader.

In November 2020, the scandal-plagued Cardinal Becciu was replaced in his role as papal delegate by Cardinal Silvano Tomasi.

In January 2022, as LifeSiteNews reported, Tomasi, in an affront to sovereignty of the Knights, “refused to admit its appointed representative to a committee on the Order’s constitution.” Knight of Malta Marwan Sehnaoui, the president of the Order’s Lebanese association and appointed by the Order as the chairman of the steering committee on constitutional reform, was barred by Tomasi from attending the two-day committee meetings. Sehnaoui met with the Pope, to no avail. Instead, Tomasi invited Riccardo Paterno, the president of the Order’s Italian association, to attend the meeting in place of Sehnaoui.

As LifeSiteNews reported, “Peter Szabadhegy, vice chairman of the Knights’ steering committee, said he was ‘astonished’ to find that Paterno had been admitted in Sehnaoui’s stead and demanded an explanation from Cardinal Tomasi which was not forthcoming. To show his disapproval, Szabadhegy left the meeting. ‘Under these circumstances, I consider that our Order is not respected, that our dignity is violated, and our future is in danger,’ wrote Sehnaoui. … According to The Pillar, ‘Tomasi’s refusal to recognize the order’s own delegates to their own constitutional process is likely to signal a total takeover of the governance of the knights.’”

According to Reuters, among other changes, “Under the previous constitution, the top Knights and the Grand Master were required to have noble lineage. … The new constitution eliminates the nobility rule as well as the tradition of Grand Masters being elected for life. … Future Grand Masters will be elected for 10-year terms, renewable only once, and will have to step down at age 85.”