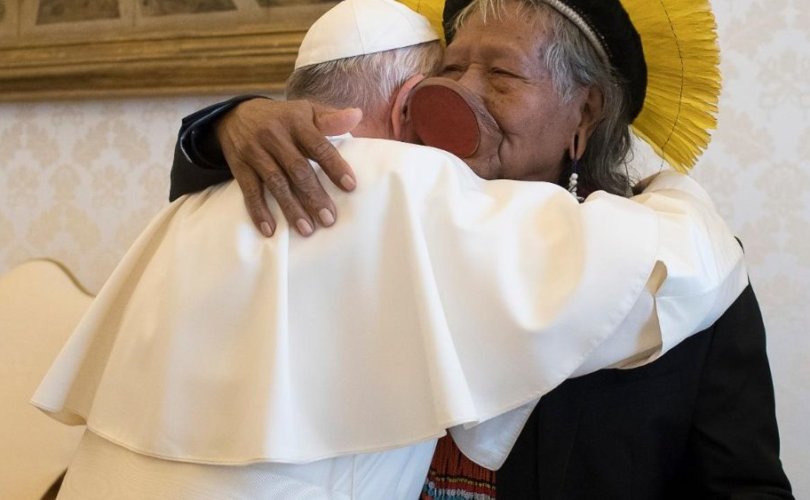 ROME, May 27, 2019 (LifeSiteNews) – In his latest effort to “shape a Church with an Amazonian face,” Pope Francis on Monday met with internationally renowned defender of the Amazon’s delicate ecosystem, indigenous chief Raoni Metukire.

Raoni, the leader of the Kayapò people, has become the “living symbol” of the fight for the preservation of the Amazon rainforest and indigenous culture, winning the international acclaim of prominent figures and celebrities such as Sting, Arnold Schwarzenegger and former French president Jacque Chirac.

His visit to the Vatican is seen as part of Pope Francis’s push to promote indigenous spirituality and “integral ecology” in preparation for the Pan-Amazonian Synod next October.

The Vatican has published several photos of the Pope’s audience with Raoni but has not disclosed further details about the meeting.

In a statement on Saturday announcing the private audience, Vatican spokesman Alessandro Gisotti said it attests to Pope Francis’s “care for the Amazonian people and environment, as well as to his commitment to safeguard our Common Home.”

“This audience with Raoni,” Gisotti added, “is also included as part of the preparation for the Special Assembly for the Amazon of the Synod of Bishops that will take place this upcoming October 6-27 on the theme, ‘Amazonia: New Paths for the Church and for an Integral Ecology.’”

Born out of Pope Francis’s 2015 environmental encyclical, Laudato si, which called for a “lifestyle and spirituality” to resist the “technocratic paradigm,” Pope Francis announced the Amazonian Synod on Sunday, October 15, 2017.

Three months later – on January 19, 2018 — he convoked the first pre-synodal council meeting during his apostolic visit to Puerto Maldonado, Perù.

There, in an address to indigenous people of Amazonia, the Holy Father spoke of the “deep wounds” suffered by Amazonian peoples, at the hands of business interests and the “conservation” movement.

He told those assembled: “I consider it essential to begin creating institutional expressions of respect, recognition and dialogue with the native peoples, acknowledging and recovering their native cultures, languages, traditions, rights and spirituality.”

In the same address, Pope Francis also called on native peoples to “help shape the culture of the local churches” in the Amazonian region.

“Help your bishops, and help your men and women missionaries, to be one with you, and in this way, by an inclusive dialogue, to shape a Church with an Amazonian face, a Church with a native face.” he said. “In this spirit, I have convoked a Synod for Amazonia in 2019.”

One year later, Pope Francis expounded on ‘native spirituality,’ telling a UN agency in Rome, at the IV Meeting of the Indigenous Peoples’ Forum: “The earth suffers and the native peoples are familiar with the dialogue with the earth; they know what it means to listen to the earth, to see the earth, to touch the earth. They know the art of living well, in harmony with the earth. And we must learn this.”

A push to prioritize native spirituality was also reflected in a leaked draft of Pope Francis’s widely-anticipated document on the reform of the Roman Curia. Number 130 of the draft document (recently obtained by LifeSiteNews) tasks a newly proposed Dicastery of Education and Culture with striving to ensure that “episcopal conferences value and protect indigenous cultures with their patrimony of wisdom and their cosmic and spiritual balance as riches for the whole of humanity in the face of the influence of the dominant culture of globalization.”

Preparing for the Pan-Amazonian Synod

With preparations for the Pan-Amazonian Synod well underway, many Catholics are worried the upcoming synod is a trojan horse for the introduction of women clergy, married priests and syncretism.

At a May 14-15 meeting at Vatican, the pre-synodal Council approved the working document [Instrumentum laboris] for the October meeting. The working document will now be sent to “interested episcopal conferences and other organizations involved in the Synod.”

According to the preparatory document for the Pan-Amazonian Synod — which served as the foundational text for the instrumentum laboris — one of the priorities of the Synod will be to “propose new ministries and services” for “different pastoral agents” in the community.

Along these lines, it is necessary to identify the type of official ministry that can be conferred on women, taking into account the central role which women play today in the Amazonian Church. It is also necessary to foster indigenous and local-born clergy, affirming their own cultural identity and values. Finally, new ways should be considered for the People of God to have better and more frequent access to the Eucharist, the center of Christian life (cf. Aparecida document 251).

Subsequent meetings which led to the approval of the working document included a March 19-21 meeting in Washington attended by Cardinal Lorenzo Baldisseri, Secretary General for the Synod of Bishops; representatives of REPAM(Pan-Amazonian Ecclesial Network) — a group founded in 2014 to serve as a liaison between the Vatican and indigenous peoples; the Vatican’s Dicastery for Integral Human Development; the Permanent Observer of the Holy See to the United Nations; and the Conference of Jesuit Provincials from the United States and Canada.

The General Rapporteur at the Synod will be Brazilian Cardinal Claudio Hummes, Archbishop Emeritus of São Paulo, and President of the Pan-Amazonian Ecclesial Network (REPAM). The Brazilian Cardinal has long advocated a change to the discipline of priestly celibacy in the Latin Rite, and the Pan Amazonian Synod plans to discuss the matter.

A friend of the Holy Father who gave him the inspiration to choose the name Francis, Cardinal Hummes made headlines back in 2006 when he argued that “even though celibacy is part of Catholic history and culture, the Church could review this question, because celibacy is not a dogma but a disciplinary question.”

According to Vatican News, Chief Raoni arrived in Europe on May 14 for a three-week tour to raise awareness among governments about the tragedy of deforestation of the Amazon, the “green lung” of the planet.

The indigenous Brazilian chief is also in Europe to raise funds for the protection of the Xingu reserve in the states of Mato Grosso, located in Western Brazil.

Raoni chose to have a painted wooden lip plate (called a ‘botoque’ by the warriors of his tribe) inserted into his lower lip at the age of 15. He is one of the last men to wear the lower lip plate as subsequent generations have not carried on this tradition.