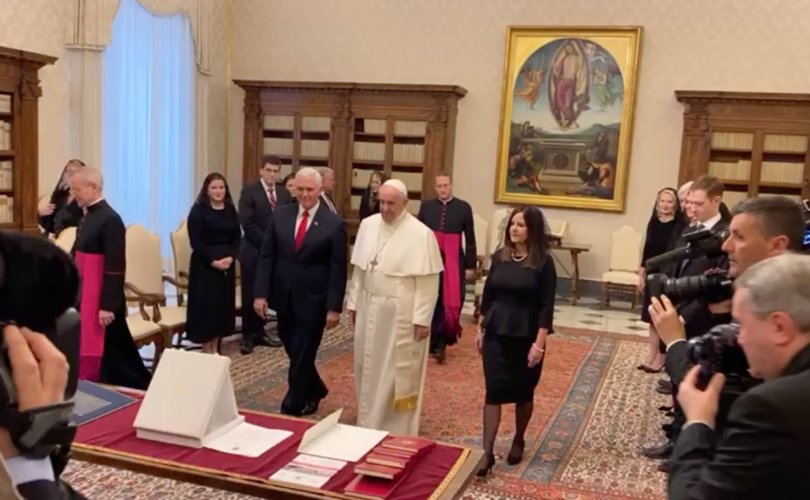 ROME, January 24, 2020 (LifeSiteNews) — Pope Francis welcomed U.S. vice president Mike Pence to the Vatican on Friday, in a meeting that highlighted the Trump administration’s alliance with the Catholic Church in matters of life and religious freedom.

Pence’s visit to the Vatican coincides with U.S. president Donald Trump’s presence at the January 24 March or Life in Washington, D.C., the first time a U.S. president has attended the event.

“I wanted to extend the warmest greetings on behalf of President Donald Trump who so enjoyed his visit here,” the vice president told Pope Francis through an interpreter during the visit.

In May 2017, just six months after his election, President Trump visited the Vatican with First Lady Melania Trump, other members of the Trump family, and members of his new administration. Trump’s 2017 audience with Pope Francis focused on their joint commitment to life and freedom of religion and conscience.

The Holy See Press Office did not release a statement on today’s meeting between Pope Francis and Mike Pence, as its policy is to reserve such statements for visits by heads of state. However, videos from today’s visit, which took place in the papal library of the Apostolic Palace, show a cordial meeting between the two.

The vice president was accompanied during the visit by Second Lady Karen Pence, U.S. ambassador to the Holy See Callista Gingrich, former U.S. speaker of the House Newt Gingrich, and members of his office staff.

The vice president’s visit to the Vatican also comes just days after President Trump declared January 22, the anniversary of the 1973 Roe v. Wade decision imposing abortion on demand across the country, to be “National Sanctity of Human Life Day.”

Pence stopped in Rome on his way back to the United States from Jerusalem, where he attended the Fifth World Holocaust Forum, which marked the 75th anniversary of the liberation of Auschwitz and International Holocaust Remembrance Day.

His visit to the Vatican comes one week after the U.S. religious freedom ambassador, Sam Brownback, traveled to Rome for the launch of the January 14–15 “Abrahamic Faiths Initiative,” hosted at the residence of Callista Gingrich. The symposium brought together Christian, Jewish, and Muslim leaders in Rome “to increase support for religious freedom around the world,” Gingrich said at the launch.

The symposium was inspired by the 2018 document on “Human Fraternity for World Peace and Living Together,” a joint statement signed in Abu Dhabi last February by Pope Francis and the grand imam of Al-Azhar.

The document provoked controversy for stating that “[t]he pluralism and the diversity of religions, color, sex, race and language are willed by God in His wisdom, through which He created human beings.”

Allies to Catholics on life and religious freedom

President Donald Trump and Vice President Mike Pence have been strong allies to Catholics on issues of life and religious freedom.

At the National Catholic Prayer Breakfast in 2017, shortly after the election, Vice President Pence assured attendees that the Trump administration will defend the unborn and religious freedom.

Trump “stands without apology for the sanctity of human life,” said Pence. “President Trump stands with the most vulnerable: the aged, the infirm, and the unborn.”

Pence, a baptized Catholic who now identifies as evangelical, spoke fondly of his Catholic childhood and told diplomats, members of Congress, and Catholic priests and prelates at the annual gathering that being among them felt like “coming home.”

In September 2019, President Trump became the first U.S. president to host a United Nations meeting on religious freedom, telling the international body that America “stands with believers in every country who ask only for the freedom to live according to the faith that is within their own hearts.”

Joined at the U.N. meeting by Vice President Mike Pence, U.S. secretary of state Mike Pompeo, and various government officials and religious leaders, the president used his remarks to detail his administration’s efforts to promote religious liberty abroad and raise awareness of persecution.

Citing deadly recent attacks on Catholics, Jews, and Muslims, President Trump said: “These evil attacks are a wound on all humanity.”

Trump has also taken a strong stance against abortion from the time he was a candidate.

Confronting Hillary Clinton about the reality of partial-birth abortion during a 2016 debate, Trump said, “[R]ipping the baby from the womb in the ninth month … is not okay.”

The president has also forcefully denounced abortion, calling attention to Democrats’ opposition to anti-infanticide legislation and calling on Congress to send him a ban on late-term abortion to sign. Most of his judicial nominees have pleased pro-lifers.

Watch LifeSite’s full coverage of the 2020 March for Life.