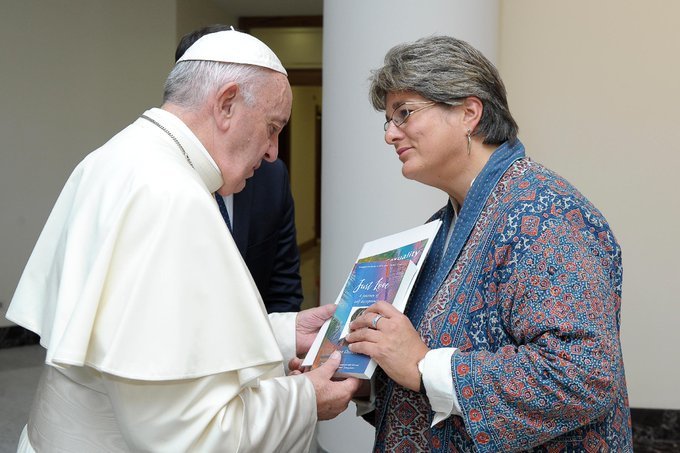 The pontiff welcomed Jayne Ozanne — the woman who convinced the Church of England to support a ban on the use of reparative, or “conversion” therapy — to his private chapel in the Casa Santa Marta. Ozanne, who now defines herself by her same-sex attractions, attended Mass and then chatted with the Pope afterward about her life and reparative therapy.

Ozanne told the Thomas Reuters Foundation that the pontiff “seemed to understand what conversion therapy was.”

She thought that Francis was “extremely warm” and “very pastoral” and said she felt “very embraced.”

With the help of a translator, Ozanne shared with Francis her earlier attempts through “conversion” therapy to develop a sexual attraction to men, having been told by Christians that she “could never be a wife, a mother, or a grandmother.”

According to a message the activist wrote on Twitter, the Pope then took Ozanne’s hands and said, “Please pray for me as I pray for you.”

The self-described evangelical Anglican gave the pontiff a copy of her autobiography Just Love: A Journey of Self-Acceptance and information about her LGBT foundation.

According to its website, the Ozanne Foundation works with “religious organisations around the world to eliminate discrimination based on sexuality or gender in order to celebrate the equality and diversity of all.”

Ozanne also gave Pope Francis a copy of a report compiled from her Foundation’s 2018 National Survey into Faith and Sexuality. According to the survey, a 10th of the respondents said they had attempted to change the direction of their sexual attractions. Half of these people said they had also experienced mental health issues.

Subsequent to her meeting with the pope, Ozanne tweeted a photograph of herself with a T-shirt that Pope Francis had signed for her.

“Wonderful surprise of a signed gift from @Pontifex for our little church in Littlemore- the church that Saint John Henry Newman built,” she wrote.

“This T Shirt which was worn by friends on a pilgrimage to (Canterbury Cathedral) for our church & to (St. Peter’s Basilica) for the canonisation.”

The Catholic Church teaches that same-sex inclination is “objectively disordered,” which means that such an inclination does not come from God but is the result of other factors.

The number of men and women who have left the homosexual lifestyle is not negligible. In May, hundreds of ex-homosexual and ex-transgender men and women from around the United States held an event in the nation’s capital, where they proclaimed the freedom they've found in abandoning homosexual and transgender practices. This month, another group of former LGBT men and women urged the U.S. Congress not to support the so-called “Equality Act” and “Therapeutic Fraud Prevention Act” that would prevent others from seeking help to escape LGBT lives.

Church Militant has reported that the Archbishop of Canterbury, Justin Welby, “facilitated” Ozanne’s meeting with Pope Francis. Welby’s own meeting with the pontiff had taken place the day before, “spin doctors” apparently having advised that the meetings be kept separate.

Some conservative Anglicans were saddened by the meeting. A former Queen’s Chaplain,  Bishop Gavin Ashenden of the Christian Episcopal Church, a traditionalist branch of the Anglican communion, told CM that the “conversion therapy” Ozanne wants banned includes prayer. He expressed sadness that she used the meeting to “persuade Pope Francis that praying for people afflicted with disordered sexual desires should be banned.”

“If you want to know where Justin Welby's heart and vision are, look no further than the meeting which he facilitated between Jayne Ozanne and Pope Francis,” Ashenden said.

“There is sad convergence between the scandal that Amazonian fertility idols have created within the Catholic Church, and the scandal that Ms. Ozanne's campaign to ban prayer for Christian transformation and holiness has produced,” he continued.

“She has become, in effect, Justin Welby’s own Pachamama, but with sterility replacing fertility.”

This is not the first meeting that Pope Francis has had with an LGBT activist. In September 2019, the pontiff received Fr. James Martin, S.J., a meeting that the author believed was a “public sign” of pontifical “support” for his work with “LGBT Catholics.”