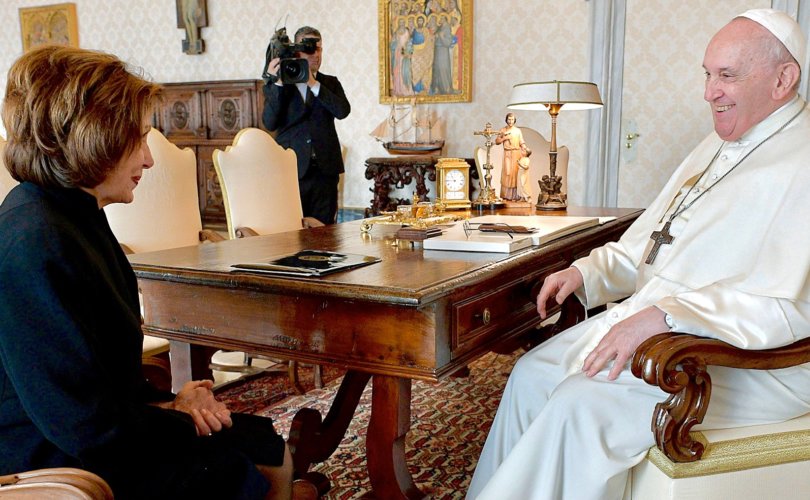 U.S. Speaker of the House Nancy Pelosi meeting with Pope Francis at the Vatican in October, 2021Twitter

VATICAN CITY (LifeSiteNews) — Nancy Pelosi met with Pope Francis during a private Vatican audience on Saturday, ahead of a preparatory meeting for a U.N.-sponsored climate conference.

In a statement after the meeting, the Speaker of the U.S. House of Representatives called her audience with Pope Francis a “spiritual, personal and official honor,” praising his encyclical Laudato Si’ as “a powerful challenge to the global community to act decisively on the climate crisis,” as well as his call to “lif[t] up those who have been left out or left behind, especially in the time of COVID.”

The two exchanged warm greetings as well as gifts, including what appeared to be a signed copy of Pope Francis’ message for the Celebration of the 54th World Day of Peace to Pelosi.

Later that day, Pope Francis addressed the inter-parliamentary preparatory meeting for the upcoming U.N.-sponsored COP26 meeting on climate change, expressing his support for the radical goals of the conference. This includes a worldwide halving of Co2 emissions in order to “reach net zero carbon emissions by the middle of the century” and thereby “limit global temperature rises to 1.5 degrees.”

Ben Geman, writing for Axios, noted that the COP26 summit “comes as global emissions are nowhere close to beginning the steep downward path needed to meet the goals of the 2015 Paris climate agreement.”

“We appeal to governments to adopt without delay a course of action that would limit the average global temperature rise and to take courageous steps, including the strengthening of international cooperation,” Francis said in his address. “Care for our common home is not just a matter of discouraging and penalizing improper practices, but … above all, of concretely encouraging new paths to pursue.”

The global aspirations supported by Pope Francis align with those of the World Economic Forum (WEF)’s anti-Catholic “Great Reset,” which has been blasted by Archbishop Carlo Maria Viganò as “a global conspiracy against God and humanity” in his letter to former President Donald Trump.

The day before the audience, the Vatican Dicastery for Promoting Integral Human Development, headed by Cardinal Peter Turkson, welcomed Pelosi, tweeting, “We talked about caring for the environment, in the light of #Laudatosi, migration issues, human rights, health in times of pandemic, and the work of the #VaticanCovidCommission for #foodforall #jobforall #healthforall.

CBS News reported that protests against Italy’s COVID Green Pass requirements for the workplace, during which tens of thousands of Italians took to the streets, “forced” Pelosi to “cancel her planned reading” at Mass in Rome on Saturday.” Italian riot police are said to have used “water cannons and tear gas to get protesters under control.”

Pelosi has been criticized by some U.S. bishops for her strong support of legalized abortion. Her own Archbishop, Salvatore Cordileone, for example, called upon Catholics to pray the rosary and fast for Pelosi’s conversion, after the U.S. House passage of the so-called Women’s Health Protection Act of 2021, which would essentially codify Roe v. Wade and “invalidate nearly all existing state limitations on abortion,” as Catholic News Service noted.

The bill also prohibits banning dismemberment abortions, which involve using forceps to tear apart a living child. According to Pelosi, this bill became necessary after Texas passed the “Heartbeat Act” that made it illegal to murder a child in utero once there is a detectable heartbeat (around six weeks after conception).

Pelosi urged judges to block the “Hearbeat Act” and went so far as to describe it as “the most extreme, dangerous abortion ban in half a century.”

“It is especially shameful that any self-professed Catholic would be implicated in such an evil, let alone advocate for it,” Archbishop Cordileone said in a Sept. 21 statement.

“A child is not an object to be thrown away, and neither is a mother’s heart,” he added. “I’ve said it before and I’ll say it again: The answer to a woman in a crisis pregnancy is not violence but love. This is America. We can do better.”

Pelosi is a vehement advocate of abortion on demand, holding a 100 percent pro-abortion voting record, and leading the U.S. House of Representatives in repeatedly blocking legislation that would require medical care to infants who are delivered alive after failed abortions. She has called the discussion of late-term abortion “sacred ground.”

In June, the U.S. bishops voted to move forward with drafting a document that would address the need for all Catholics to receive our Lord in Holy Communion only in a state of grace, prompting Cardinal Blase Cupich of Chicago to protest what he saw “an expectation” that we deny communion to the president, to Speaker Pelosi, and to other people being named.

However, just weeks ago, Pope Francis suggested that denying even an obstinately pro-abortion politician communion is a “political” and not “pastoral” act, advising clergy, “If you say you can give or not give [the Eucharist], this is casuistry.” He added that he has never denied Holy Communion to anyone.

In contrast to Pope Francis’ silence on the issue of abortion during his meeting with Pelosi, in 2009, when Pope Benedict XVI met with Pelosi, the Holy See’s press office released a statement explaining that Pope Benedict “took the opportunity to speak of … the Church’s consistent teaching on the dignity of human life from conception to natural death which enjoin all Catholics, and especially legislators … in creating a just system of laws capable of protecting human life at all stages of its development.”