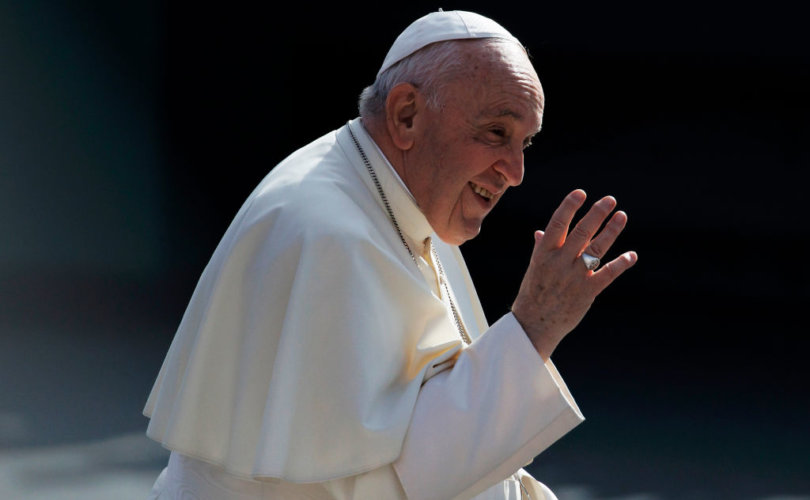 Pope Francis waves at admirers as he arrives at Commonwealth Stadium to give an open-air mass on July 26, 2022 in Edmonton, Canada. Cole Burston/Getty Images

(LifeSiteNews) — In conversation with Canadian Jesuits during his recent journey to Canada, Pope Francis attacked “traditionalism” as the “dead life of our believers” that must be moved past, adding that synodality is an intrinsic part of the Catholic Church.

On the last day of his visit to Canada, July 29, Pope Francis sat down with fellow Jesuits in Quebec City to discuss a wide range of topics. The transcript of their conversation was recorded by Father Antonio Spadaro, S.J., editor of Jesuit-run La Civiltà Cattolica, and published in Italian and English.

Synodality is the Church, Francis says

Responding to a question about his “synodal vision of the Church,” Pope Francis rejected the concept that “synodal” was a way to describe the Church, attesting that the two words were equivalent. “Look, it bothers me that the adjective ‘synodal’ is used as if it were the latest quick fix for the Church,” he said.

When one says “synodal Church” the expression is redundant: the Church is either synodal or it is not Church. That is why we have come to a synod on synodality, to reiterate this.

In the wake of Paul VI’s establishment of the Secretariat of the Synod of Bishops, “synod after synod has gone ahead, tentatively, improving, understanding better, maturing,” Francis said.

The Church is currently in the midst of the Synod on Synodality, called by Francis, running from 2021 through 2023. As part of the “listening” process to understand “how God is calling us to be as the Church in the third millennium,” Francis ordered that the Church must listen to “people who have left the practice of the faith, people of other faith traditions, people of no religious belief, etc.”

Liturgical scholar and Thomist Dr. Peter Kwasniewski previously warned LifeSiteNews about the dangers in the modern understanding of synodality, declaring that “we see a continual submersion in bureaucracy, a surrender to the modern mentality of administration as the cure for all evils, which keeps the Church busy gazing at its navel while real evangelization withers and the pews empty out.”

Traditionalism is the ‘dead memory’ of individuals in the Church

In a theme that has become all too familiar, Pope Francis also turned against “traditionalists” and “traditionalism” while speaking to the assembled clergy.

Noting how slavery was once permitted and is not outlawed, Francis commented that “the moral life is progressing along the same line.”

He defended a “respect for tradition” but only as long as it was “the authentic one.”

Attacking a description of tradition as being “the living memory of believers,” Francis declared that “traditionalism instead is the dead life of our believers.”

Tradition is the life of those who have gone before us and who go on. Traditionalism is their dead memory. From root to fruit, in short, that is the way. We must take the origin as a reference, not a particular historical experience taken as a perpetual model, as if we had to stop there. “Yesterday it was done like this” becomes “it always has been done like this.” But this is a paganism of thought!

While on his return flight to Rome, Francis reiterated this and advocated for “development” in the Church’s morality, specifically with regard to contraception.

However, theologian and exorcist Father Chad Ripperger has outlined five principles to distinguish between novelty and tradition, noting first that “if there is any contradiction between what the tradition has always held and the new teaching, the teaching is a novelty and is to be rejected.”

Any “development of teaching is possible only when it is homogenous,” wrote Ripperger, meaning that a substantial shift or radical new presentation of the faith would be against the truths contained in the Deposit of Faith.

Following on from his attack on tradition, Francis warned one Jesuit who questioned him about what he described as “conflict” over the liturgy.

“When there is conflict the liturgy is always mistreated,” he said.

He referenced a move in Latin America away from liturgical innovations after Vatican II, desiring this as a “backward-looking [indietrista] intoxication with the old.”

“A division was established in the Church,” he said.

Alluding to his wide-reaching restrictions on the traditional Mass in Traditionis Custodes, Francis stated that the “most recent verification made it clear that there was a need to regulate the practice [of the Latin Mass], and above all to avoid it becoming a matter, let us say, of ‘fashion’ and remaining instead a pastoral question.”