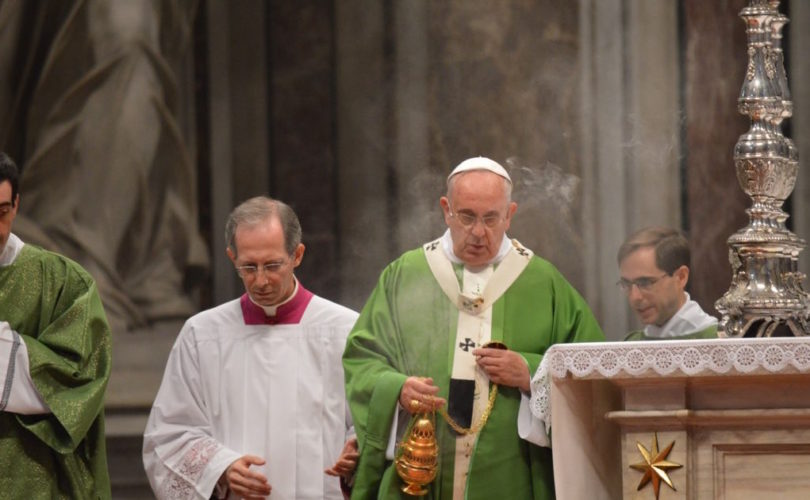 June 17, 2016 (LifeSiteNews) – Pope Francis spoke yesterday at a pastoral congress on the family for the Diocese of Rome, and his remarks are causing consternation among faithful Catholics. In off-the-cuff remarks, the pope made the dual claim that the “great majority” of Catholic marriages are “null” – in other words, not actual marriages – and that some cohabitating couples are in a “real marriage,” receiving the grace of the Sacrament.

“I’ve seen a lot of fidelity in these cohabitations, and I am sure that this is a real marriage, they have the grace of a real marriage because of their fidelity,” he said.

The Vatican has provided video of the full remarks by the Pope as well as a full transcript of his remarks.  In the transcript, however, the words of the Pope as heard clearly in the video (at 1:14:20) are changed from saying the “great majority” of Catholic marriages are null, to “a part” of them are null.

The Pope’s remarks on cohabitation came in response to a question on the crisis in marriage today. He began by speaking of living in a “culture of the provisional” recalling a story of a boy who wanted to be a priest, “but only for ten years.”

He added, “In Argentina’s northeast countryside, couples have a child and live together. They have a civil wedding when the child goes to school, and when they become grandparents they ‘get married religiously.’”

Regarding cohabitation, the Catechism of the Catholic Church says:

2391 Some today claim a “right to a trial marriage” where there is an intention of getting married later. However firm the purpose of those who engage in premature sexual relations may be, “the fact is that such liaisons can scarcely ensure mutual sincerity and fidelity in a relationship between a man and a woman, nor, especially, can they protect it from inconstancy of desires or whim.” Carnal union is morally legitimate only when a definitive community of life between a man and woman has been established. Human love does not tolerate “trial marriages.” It demands a total and definitive gift of persons to one another.

Pope St. John Paul II’s Familiaris Consortio spelled out the harm of cohabitation. The various factors leading to situations of cohabitation, he says,

…presents the Church with arduous pastoral problems, by reason of the serious consequences deriving from them, both religious and moral (the loss of the religious sense of marriage seen in the light of the Covenant of God with His people; deprivation of the grace of the sacrament; grave scandal), and also social consequences (the destruction of the concept of the family; the weakening of the sense of fidelity, also towards society; possible psychological damage to the children; the strengthening of selfishness).

Translation of Pope Francis' remarks are taken from Rorate Caeli.