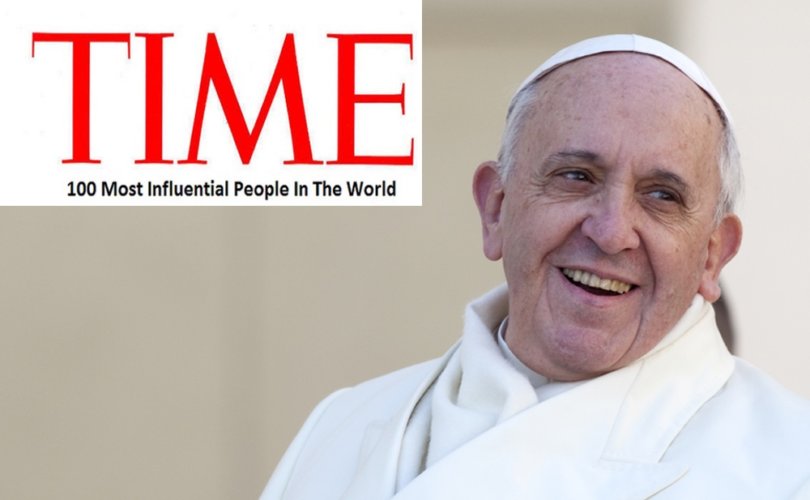 NEW YORK, April 21, 2017 (LifeSiteNews) — Time Magazine has named Pope Francis for five years in a row as one of the “most influential people” in the world in its annual “Time 100” list. He first appeared on the list in 2013 after becoming pope.

The Time’s selection of Francis includes a brief reflection by Chicago Cardinal Blase Cupich, who praised the Pope for helping the Church to “acknowledge” her “faults” as a way of accompanying a “suffering world.”

“Before hearing confessions in St. Peter’s Basilica, he [Francis] kneels in confession himself—because one cannot accompany a suffering world without acknowledging one’s own faults. The same goes for the church Francis leads,” he wrote.

Times makes it clear that persons making it on their list are simply being recognized for the change they have made in the world, whether, in their view, that change was for the good or not.

Numerous recent popes have been honored or recognized by Time magazine for their extraordinary influence on the world.

St. John XXIII was on the cover as their “man of the year” for 1962. According to Time, he had the “biggest individual imprint on the year” for convening the Second Vatican Council.

By making the cut this year, Francis joins an exclusive list of those named five or more times since the magazine began its nominations in 1999. Some of these include Barack Obama (listed 11 times), Hillary Clinton (10 times), Oprah Winfrey (9 times), Angela Merkel (8 times), Vladimir Putin (6 times).

In his article, Cupich praises Francis for overcoming a “self-referential” Church.

“Before being elected Pope, Francis gave a speech to his fellow Cardinals warning against becoming a ‘self-referential’ church, rather than one that goes out of itself to the margins of society to be with those who suffer. That is where God is working in the world and where he calls us to be. This has rung especially true this year, as Francis has spoken out on the need to welcome refugees amid a global crisis,” he wrote.

In a 2014 interview with CNN, Time senior editor Dan Macsai said that those who write about the top 100 influencers are selected for the closeness to and knowledge of the person who has been nominated.

Cupich, who was made Cardinal by Francis last October, has used his increasing influence under the current pontificate to advance practices at odds with Catholic teaching.

At the 2015 Synod on the Family, Cupich laid out a pathway for same-sex couples as well as the divorced and remarried to receive Holy Communion in accordance with their consciences. He has called Francis’ exhortation Amoris Laetitia a “game-changer” for civilly-divorced-and-remarried Catholics as well as those in homosexual relationships. Last November the Cardinal said that anyone who “doubts and questions” Amoris Laetitia  needs “conversion.”