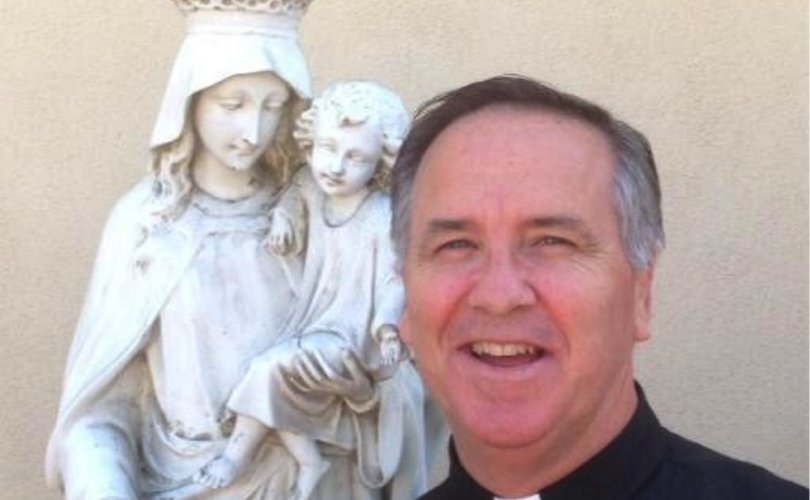 Father John P. Dolan, 54, expressed his gratitude to Pope Francis in a statement to the Times of San Diego, and said he looked forward to “accompanying” Bishop McElroy in his ministry to the diocese.

In December, LifeSiteNews reported that the director of young adult ministry at the St. John the Evangelist was an openly gay man who worked for the radical dissident group Call to Action. At the time St. John’s pictured a cross superimposed on a rainbow flag in its social media pages.

The LGBT activist group New Ways Ministry celebrated Fr Dolan’s appointment on its blog on Wednesday. Associate Editor Robert Shine quotes the bishop-elect as saying, “There are two different forms of doing church… One is very dialogical, from a dialogical sense, and the other is from a monological sense. And we have dealt with that monological world: Things come from on high, they get shelved in some pastor’s corner, then there’s some thought that comes down, but ultimately it’s all ‘We’re going to tell you what to think…’”

“Young adults have an acceptance of the LGBT experience. It is simply a part of their world, and they look at us, and say, ‘What is the problem?’”

Bishop McElroy told the San Diego Union Tribune that Dolan’s appointment is in line with Pope Francis’ emphasis on appointing “pastors” rather than theologians.

“Less abstraction, and more knowledge of the nitty, gritty of life,” McElroy said.

Fr. Dolan had the first clue to his appointment when he checked his cell phone in the confessional and saw that he had missed a call from the papal nuncio in Washington D.C.

“Then I heard, ‘Bless me, Father, for I have sinned,” Dolan told the Union Tribune. “Let me just say, that was the longest hour of confessions I’ve ever had.”

A lifelong resident of San Diego, the future auxiliary bishop went to local Catholic schools before attending St. Francis Seminary and the University of San Diego. He earned both a Master of Divinity and a Master of Theology degree at St. Patrick’s Seminary in Menlo Park. He was ordained a priest in 1989 by Bishop Leo T. Maher.

According to New Ways Ministry, the “Francis Effect” can be seen in recent episcopal appointments: Francis appointee Bishop John Stowe of Lexington, Kentucky participated in the organization’s national symposium, and Francis appointee Cardinal Blase Cupich of Chicago has said both that LGBT people must “follow their consciences” and that the Church must be open to “new avenues and creativity when it comes to accompanying [non-traditional] families.”

Stating that “the pope’s influence on the U.S. episcopate is continuing to grow,” New Ways Ministry observes, hopefully, that “there are presently eight vacant dioceses, and several dozen bishops approaching the age of mandatory retirement.”

Catholic bishop’s blistering rebuke of Trump: ‘Now we must all become disruptors’