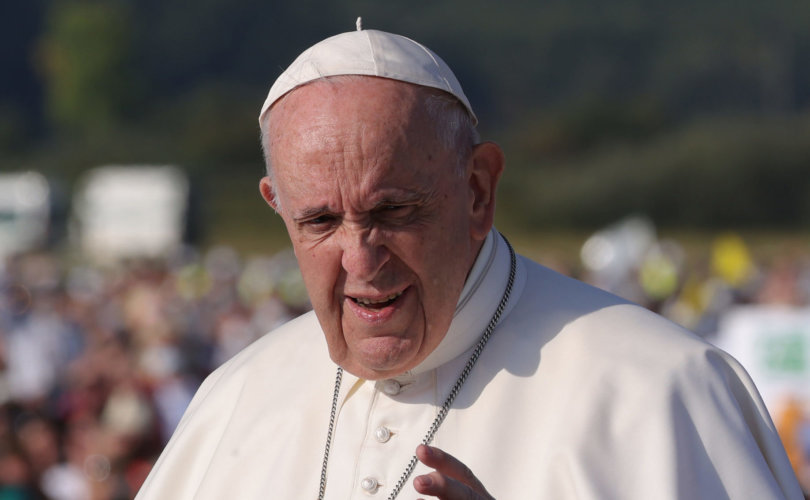 (LifeSiteNews) – In the midst of an in-flight interview Wednesday following his visit to Eastern Europe, Pope Francis said that distributing the Eucharist to pro-abortion politicians must be determined in the “pastoral dimension,” without “condemning,” and that he has never denied the Eucharist to anyone.

On his return flight from Bratislava, Slovakia, to Rome, Pope Francis spoke with journalists, answering questions on vaccination, abortion, and the issue of distributing Holy Communion to Catholic politicians who openly support abortion.

Though the Pope was able to outline the Church’s clear position on abortion that “it’s murder, whoever has an abortion kills,” he subsequently said that when it comes to denying pro-abortion politicians Communion, “the problem is not theological, it is pastoral, how we bishops manage this principle pastorally.”

Prefacing his remarks on distributing Communion to pro-abortion politicians by repeating an oft used phrase of his that “Communion is not a prize for the perfect,” Francis later described a “hypothesis” by which priests may give the Eucharist to such people, suggesting that priests might be “close, tender, and give Communion.”

The Pope criticized priests who “go beyond the pastoral dimension” and “become a politician” on the issue of distributing Communion to opponents of the Faith, asking: “What must the pastor do? Be a pastor, don’t go condemning. Be a pastor because he is a pastor also for the excommunicated. Pastors with God’s style, which is closeness, compassion and tenderness.”

The Pope drew a comparison with the controversy that was ignited upon the release of Amoris Laetitia, between “that chapter on accompanying separated, divorced couples” and the current discussion in the U.S. over withholding the Eucharist from pro-abortion politicians like President Joe Biden.

Though the Pope did not want to comment directly on denying the Eucharist in the U.S., he said that he would comment “on the principle.”

After thanking Cardinal Christoph Schönborn, whom he called “a great theologian,” for clarifying the controversy in Amoris Laetitia after charges of heresy were raised against him, Francis noted that, like divorced and remarried couples, pro-abortion politicians are “children of God and they need our pastoral closeness, then the pastor resolves things as the Spirit indicates to him.”

“If you say you can give or not give [the Eucharist], this is casuistry,” he added.

Asked if he had ever given the Eucharist to a pro-abortion politician, the Pope revealed that he has never denied the Eucharist to anyone since becoming a priest, adding that “I don’t know if anyone has come in these conditions.” Instead, he related an occasion when he inadvertently distributed Holy Communion to a Jewish woman while visiting a nursing home.

Describing the occasion as “a nice thing [to] happen,” Francis told the woman, who revealed she was Jewish only after having received Communion, that “[w]hat I gave you is Jewish too,” and suggested that “the Lord wanted to reward her” by allowing the Pope to accidentally administer the host, despite his recognition that “those who are not in the community cannot take communion.”

LifeSiteNews spoke with Dr. Peter Kwasniewski, a liturgical expert and author of “Reclaiming Our Roman Catholic Birthright: The Genius and Timeliness of the Traditional Latin Mass.”

Kwasniewski expressed disbelief that the Pope has “not only never refused Communion but has never met someone who deserved to be refused communion (as per Canon 915).” Although the Jewish woman did receive Communion, “the Pope makes it clear he didn’t know and so he was not deliberately giving the Lord to a non-Christian.”

“However,” Kwasniewski continued, “his explanation of it makes it sound like ‘no big deal,’ like something one laughs off. Obviously, he wasn’t going to berate the old lady, but he shouldn’t describe it as rewarding her. There has never been any doubt that it is objectively gravely evil for an unbeliever to receive the Eucharist, just as it evil for a non-practising Catholic to receive.”

Asked about the divisions between Christians on taking the COVID jabs, the Pope said that the issue is “a bit strange,” arguing that “humanity has a history of friendship with vaccines.” Francis suggested that the “diversity of the vaccines” developed against COVID, some of which he described as “a little more than distilled water,” has “created fear” about taking them.

In an apparent reference to Cardinal Raymond Burke, who was recently hospitalized after testing positive for COVID-19, Pope Francis suggested that “in the college of cardinals, there are some deniers,” but he did not say exactly what it is these cardinals deny, only adding that “one of them, poor man, is in hospital with the virus. It’s an irony of life.”

Kwasniewski told LifeSiteNews that the Pope’s comments on the COVID shots “show him to be profoundly ignorant — or incapable of reasoning — about the issues that are involved,” and that his reference to Cardinal Burke “is dripping with contempt.” Explaining, Kwasniewski said that Francis’ apparent jibe against Burke is “not surprising, considering that he has held him in contempt from the moment the still-unanswered Dubia were submitted.”