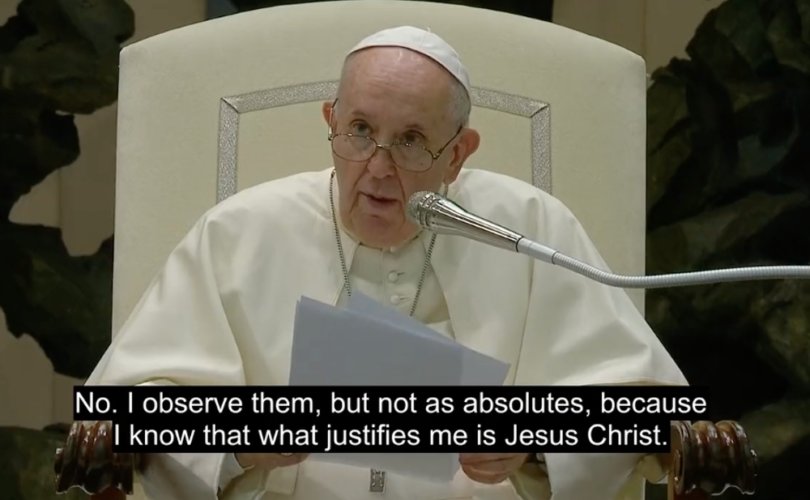 ROME (LifeSiteNews) – “I observe them, but not as absolutes,” Pope Francis said of the Ten Commandments at a general audience on August 18, 2021.

Pope Francis made the statement in the context of how Christians live a moral life. He began the discourse by asking the audience a rhetorical question. “How do I live?” he said.

He responded to his own question by saying, “Do I live in fear that if I don’t do this or that I will go to hell? Or do I also live with that hope, with that joy of the gratuitousness of salvation in Jesus Christ? That’s a good question.”

The Catholic Church teaches that anyone who dies not having repented of just one mortal sin does indeed go to hell.

The answer Pope Francis gave to this question addressed whether or not he views the Ten Commandments as binding moral laws. About whether he “disregards” the Ten Commandments he said, “No. I observe them, but not as absolutes, because I know that what justifies me is Jesus Christ.”

The audience applauded as the Pope finished speaking.

The Catechism of the Catholic Church states about the Ten Commandments: “They were written ‘with the finger of God’… They are pre-eminently the words of God” (CCC 2056).

The Catechism also states that “in fidelity to Scripture and in conformity with the example of Jesus, the tradition of the Church has acknowledged the primordial importance and significance of the Decalogue [the Ten Commandments]” (CCC 2064).

He said the Law was formerly seen as “a series of prescriptions and prohibitions,” but according to the Spirit it “became life.” The Pope explained that this meant that the Ten Commandments were no longer norms but that “the very flesh of Christ who loves us, seeks us, forgives us, consoles us and in His body recomposes communion with the Father, communion that was lost through the disobedience of sin.”

This led the Holy Father to say in the same audience, “According to various Old Testament texts, the Torah – that is, the Hebrew term used to indicate the Law – is the collection of all those prescriptions and norms the Israelites had to observe by virtue of the Covenant with God.”

In his estimation, it was not only the Laws of Moses applicable to the Old Covenant, but also the Ten Commandments themselves that were part of the norms for the Israelites at the time.

He continued by asking a rhetorical question, “But one of you might say to me: ‘But, Father, just one thing: does this mean that if I pray the Creed, I do not need to observe the commandments?’”

Jesus Christ said, “If you love me, keep my commandments” (John 14:15). In addition, in Canon XX of the 6th session of the Council of Trent states: “If any one saith, that the man who is justified and how perfect soever, is not bound to observe the commandments of God and of the Church, but only to believe; as if indeed the Gospel were a bare and absolute promise of eternal life, without the condition of observing the commandments; let him be anathema.”