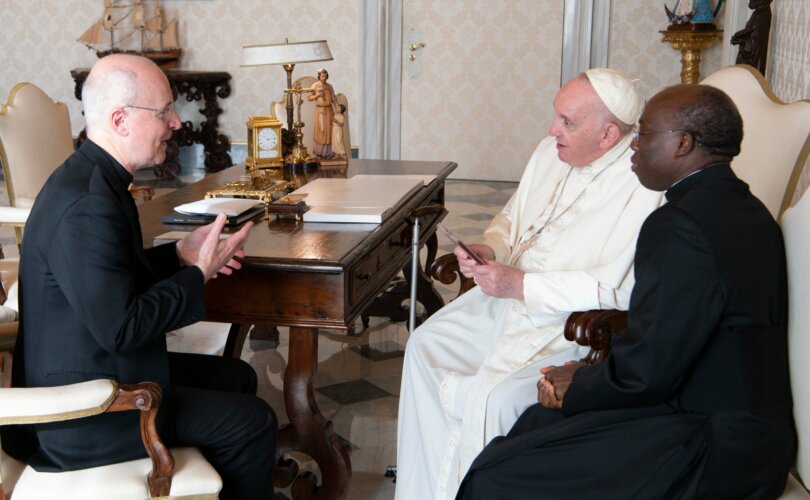 Martin met with the Holy Father on Friday morning after attending the Thursday plenary meeting of the Vatican’s Dicastery for Communication, for which he has served as a consultor since 2017, reportedly speaking with the Pontiff for 45 minutes, during which time the pair covered topics including “the joys and hopes, the griefs and anxieties, of LGBTQ Catholics.”

I was deeply grateful to meet with Pope Francis @Pontifex in the Apostolic Palace this morning for 45 minutes, during which we spoke about the joys and hopes, the griefs and anxieties, of LGBTQ Catholics. It was a warm, inspiring and encouraging meeting that I’ll never forget.

“It was a warm, inspiring and encouraging meeting that I’ll never forget,” Martin wrote to his 300,000-plus followers on Twitter.

In a follow-up tweet the celebrity priest, whom Pope Francis recently reappointed as consultor to the Dicastery for Communication for another five-year term, said he was “[d]eeply grateful to meet with the Holy Father in the Apostolic Palace this morning [November 11],” adding that their discussion of the experience of “LGBTQ Catholics” was “punctuated by laughter.”

No details about what was said by either of the clerics during their meeting were published.

The dissident priest has been received by Pope Francis numerous times since joining the Roman Curia, despite his open advocacy for homosexuality and confusing remarks on when life begins following the overturning of Roe v. Wade by the U.S. Supreme Court. Meanwhile, the persecuted former Bishop of Hong Kong, Cardinal Joseph Zen, has been ignored, side-lined, and even castigated by the Pope over his ongoing trial.

Earlier this year, through a hand-written letter sent to Martin, the Pope addressed “LGBT Catholics” with a statement decrying their apparent “rejection” from among “a sect” within the Church. Published on Martin’s “Outreach” website, a “new LGBTQ Catholic resource,” the letter added that for supposedly LGBT individuals, “I would have them recognize it not as ‘the rejection of the church,’ but instead of ‘people in the church.’ The church is a mother and calls together all her children.”

After his last meeting with the Pope in September, Martin took to Twitter to thank Francis for his “love and affection for LGBTQ people” and his “support for all who minister among them.”

Three years ago today I met with the Holy Father in the Apostolic Palace to discuss LGBTQ Catholic ministry. I want to thank @Pontifex for his love and affection for LGBTQ people, both inside and outside the church, and for his ongoing support for all who minister among them. pic.twitter.com/KjYFH7eNSx

Missing from Martin’s praise for Francis, and indeed the Pope’s embrace of so-called “LGBT Catholics,” is any call to chastity, as is taught by the Catholic Church for those living with deep-seated homosexual inclinations.

The Catholic Church teaches that “‘homosexual acts are intrinsically disordered’ and “are contrary to the natural law,” adding explicitly that “under no circumstances can they be approved.”

Despite the Church’s clear recognition of homosexual acts as “disordered,” Martin has explicitly defended the homosexual lifestyle as “the way that God created a part of the human race.”

In September, the Jesuit priest took to social media to criticize Bishop Donald DeGrood of the Diocese of Sioux Falls over his pastoral guidelines banning Catholic students from advocating, celebrating, and expressing “same-sex attraction” and transgenderism.

“[P]eople should be able to, and encouraged to, ‘celebrate’ who they are and, more importantly, how God made them, including LGBTQ people,” Martin argued, adding that “[t]his is crucial for young people, and especially for LGBTQ youth, who feel [thanks to the bishop’s statement] ignored, rejected, condemned, marginalized and completely unwelcome in their own church.”

In a 2019 meeting with Martin, Pope Francis encouraged the dissident priest in his ministry, stating that he should “continue this way.”