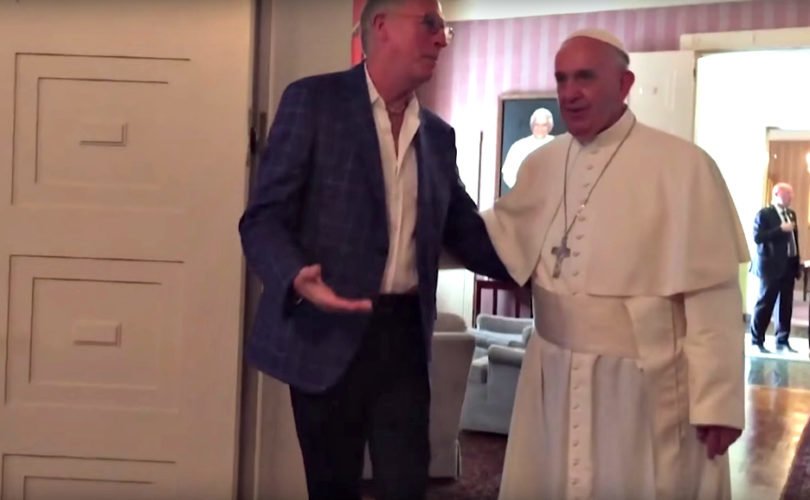 WASHINGTON, D.C., October 2, 20015 (LifeSiteNews) — Hours after the Vatican distanced itself from embattled Kentucky clerk Kim Davis, CNN has reported Pope Francis met privately with a gay couple and their friends while in the U.S.

“Three weeks before the trip, he called me on the phone and said he would love to give me a hug,” Yayo Grassi told CNN. Grassi was a student of Pope Francis' in the 1960s in Argentina.

In its statement this morning about the pope’s meeting with Kim Davis, the Vatican press office had said that Davis was just one of a large group of people with whom the pope had briefly met at the nunciature.

The press release added that “the only real audience granted by the Pope at the nunciature (embassy) was with one of his former students and his family.”

Grassi says that former student was himself, and that he was accompanied by his same-sex partner, his mother, and some friends.

“That was me,” Grassi said.

The Vatican confirmed that the meeting took place. “Mr. Yayo Grassi, a former Argentine student of Pope Francis, who had already met other times in the past with the Pope, asked to present his mother and several friends to the Pope during the Pope’s stay in Washington, DC,” said Rev. Thomas Rosica, the English-language attache for the Vatican's press office.

“As noted in the past, the Pope, as pastor, has maintained many personal relationships with people in a spirit of kindness, welcome and dialogue.”

While Grassi says the pope has always known of Grassi's same-sex sexual attractions, Francis has not condemned the former student's sexuality or relationships. Grassi had previously met with the pope, along with Grassi's boyfriend Iwan, in Rome.

CNN reports that a video shows Pope Francis hugging both men and kissing them on the cheek.

“Obviously he is the pastor of the church and he has to follow the church's teachings,” Grassi noted. “But as a human being he understands all kinds of situations, and he is open to all kinds of people, including those with different sexual characteristics.”

While Grassi says he is close to the pope, they have also had their disagreements about sexuality. In 2010, then-Cardinal Jorge Margio Bergoglio indicated that same-sex “marriage” is of Satan; Grassi wrote him an e-mail that said “You have been my guide, continuously moving my horizons—you have shaped the most progressive aspects of my worldview.”

“And to hear this from you is so disappointing,” wrote Grassi, who told CNN that the cardinal replied, saying he was sorry to have upset the former student, vowing that “homophobia” was not acceptable in the Catholic Church.

However, National Geographic Magazine, which first reported on the e-mail exchange, added that the pope “did not disavow” what he had said about same-sex ‘marriage.’

Grassi also told CNN that he believes the pope was “misled” into meeting with Davis.