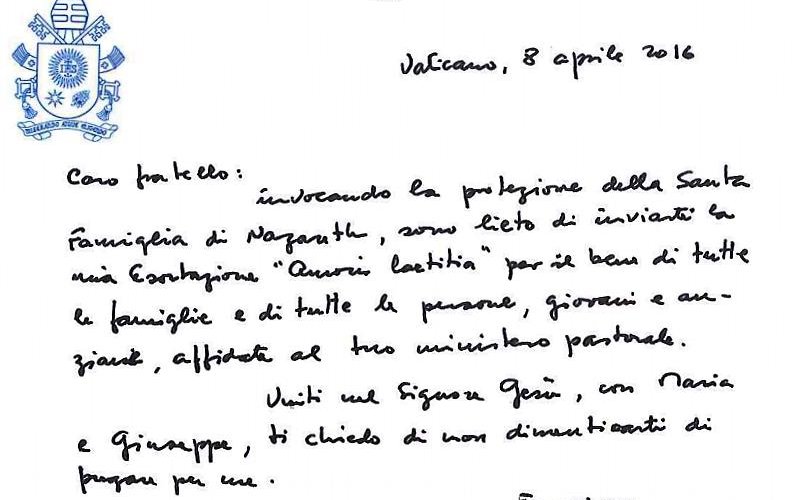 ROME, April 8, 2016 (LifeSiteNews) – The most controversial moment of Pope Francis’ new apostolic exhortation – Amoris Laetitia (The Joy of Love) – might be confined to a humble footnote, but the implication is clear: the pope has opened the door to Cardinal Walter Kasper’s proposal that in some circumstances divorced and remarried Catholics could be readmitted to the sacraments, including the Eucharist.

In so doing the pope appears to have taken up a position contrary to that of his predecessors, most notably Pope Saint John Paul II, who had flatly rejected the idea of admitting the divorced and remarried to Communion in his apostolic exhortation Familiaris Consortio. Pope Benedict XVI, during his time as prefect of the Congregation for the Doctrine of the Faith, had also addressed the controversy, coming down definitively against liberalizing the Church’s practice.

It isn’t until Chapter 8 of Pope Francis’ historically lengthy apostolic exhortation that he deals directly with the question that has embroiled the Church in debate for the past two years – ever since Cardinal Kasper, at Pope Francis’ personal invitation, outlined his controversial proposal in a keynote address to a consistory of Cardinals at the Vatican.

The text of the final document (or relatio) of last year’s Synod on the Family had caused concern among some synod fathers by referencing the idea of the “internal forum” in relation to the debate over the divorced and remarried. This idea has been used by some theologians to argue that a penitent who persists in an objectively sinful state could discern, in private discussion with his confessor, that his subjective culpability is limited, and he could therefore return to the sacraments.

In the exhortation released today, Pope Francis has adopted and expanded that reasoning.

Though the entire thrust of Chapter 8 is making the case for a deeper “integration” of those in “irregular unions” into the life of the Church, in the main body of the text the pope leaves the meaning of the phrase more or less ambiguous. However, he provides a clear answer at the end of a footnote to paragraph 305, where he states that this “integration” can, “in certain cases,” involve admittance to the sacraments, including the Eucharist. He does not explicitly elucidate what those “certain cases” might be, though broad principles for discernment are given elsewhere in the text.

In paragraph 305, the pope warns that “a pastor cannot feel that it is enough simply to apply moral laws to those living in ‘irregular’ situations, as if they were stones to throw at people’s lives.” Quoting a well-known section of his own speech at the conclusion of the Synod on the Family last October, Francis says that such a pastor would be “sitting on the chair of Moses and judging at times with superiority and superficiality difficult cases and wounded families.”

Because of forms of conditioning and mitigating factors, it is possible that in an objective situation of sin – which may not be subjectively culpable, or fully such – a person can be living in God’s grace, can love and can also grow in the life of grace and charity, while receiving the Church’s help to this end.

At the end of that sentence, he includes a footnote (351), which clarifies: “In certain cases, this can include the help of the sacraments,” and then refers to both Confession and the Eucharist. He writes: “I would also point out that the Eucharist ‘is not a prize for the perfect, but a powerful medicine and nourishment for the weak.’”

Speaking of the problem of integrating people in irregular unions, the pope says it would be impossible to establish “general rules,” such as through canon law. Rather, he encourages individuals to discern their individual circumstances in the “internal forum” – i.e. in private consultation with their priest – and following guidelines established by the bishop.

He writes: “What is possible is simply a renewed encouragement to undertake a responsible personal and pastoral discernment of particular cases, one which would recognize that, since ‘the degree of responsibility is not equal in all cases’, the consequences or ef­fects of a rule need not necessarily always be the same.”

This applies even to “sacramental discipline,” he writes in a footnote to that text, because “discernment can recognize that in a particular situation no grave fault exists.”

Quoting the Synod on the Family’s final text, he says the discernment “can never prescind from the Gospel demands of truth and charity, as proposed by the Church.” Still quoting the Synod text, he says the discernment must involve several conditions: “humility, discretion and love for the Church and her teaching, in a sincere search for God’s will and a desire to make a more per­fect response to it.”

He then writes: “These attitudes are essen­tial for avoiding the grave danger of misunder­standings, such as the notion that any priest can quickly grant ‘exceptions’, or that some people can obtain sacramental privileges in exchange for favours.”

The pope bases his argument on a radical interpretation of the role of conscience – which he suggests could, in some cases, actually reveal to a person that God may in fact be “asking” them to continue in a situation that does not achieve the “objective ideal” of the Gospel.

The pope writes that “individual conscience needs to be incorporated into the Church’s praxis in certain situations which do not objectively embody our understanding of marriage.” He continues:

Naturally, every effort should be made to encourage the development of an enlightened conscience, formed and guided by the responsible and serious discernment of one’s pastor, and to encourage an ever greater trust in God’s grace. Yet conscience can do more than recognize that a given situation does not correspond objectively to the overall demands of the Gospel. It can also recognize with sincerity and honesty what for now is the most generous response which can be given to God, and come to see with a certain moral security that it is what God himself is asking amid the concrete complexity of one’s limits, while yet not fully the objective ideal.

Perhaps the most surprising aspect of the exhortation’s treatment of irregular unions is the pope’s apparent dismissal of the idea that couples in such unions who find themselves unable to separate for legitimate reason should be required or even encouraged to live together as “brother and sister” – i.e. to forego engaging in sexual relations.

Pope John Paul II had, in Familiaris Consortio, proposed sexual continence as the only moral solution for couples who, repenting of their irregular union, find that “for serious reasons” – such as the need to raise their children – they “cannot satisfy the obligation to separate.” In such cases, wrote John Paul II, the couple must “take on themselves the duty to live in complete continence, that is, by abstinence from the acts proper to married couples.”

Pope Francis, however, while citing this sentence of Familiaris Consortio to show that the Church does acknowledge cases where separation may be impossible, leaves out the latter half of the sentence, which references the obligation to continence. In a footnote, Pope Francis then casts into doubt the wisdom of living in continence for such couples, suggesting that doing so could harm the couple’s relationship and children.

“In such situations, many people, knowing and accepting the possibility of living ‘as brothers and sisters’ which the Church offers them, point out that if certain expressions of intimacy are lacking, ‘it often happens that faithfulness is endangered and the good of the children suffers.’” This footnote in turn cites the Second Vatican Council’s document, Gaudium et Spes – in particular a section that acknowledges the strain married couples face during periods of abstinence in the practice of natural family planning. However, Pope Francis’ usage of the quote applies it to those in irregular unions.

Pope Francis acknowledges that the pastoral approach he has outlined may be viewed by some as causing confusion, but suggests that this is a risk he is willing to take. “I understand those who prefer a more rigorous pastoral care which leaves no room for confusion,” he writes. “But I sincerely believe that Jesus wants a Church attentive to the goodness which the Holy Spirit sows in the midst of human weakness, a Mother who, while clearly expressing her objective teaching, 'always does what good she can, even if in the process, her shoes get soiled by the mud of the street'.”

The pope’s decision today follows decades of pressure on the issue from progressives in the aftermath of Vatican II. In particular, it was a major point of discussion at the Synod on the Family that Pope John Paul II convened in 1980. It was in his exhortation following that Synod, Familiaris Consortio, that he firmly shut the door on the question, citing Scripture and the Church’s doctrine. His short paragraph on the issue still offers the most cogent and concise explanation for why the proposal is impossible. He wrote:

However, the Church reaffirms her practice, which is based upon Sacred Scripture, of not admitting to Eucharistic Communion divorced persons who have remarried. They are unable to be admitted thereto from the fact that their state and condition of life objectively contradict that union of love between Christ and the Church which is signified and effected by the Eucharist. Besides this, there is another special pastoral reason: if these people were admitted to the Eucharist, the faithful would be led into error and confusion regarding the Church's teaching about the indissolubility of marriage.