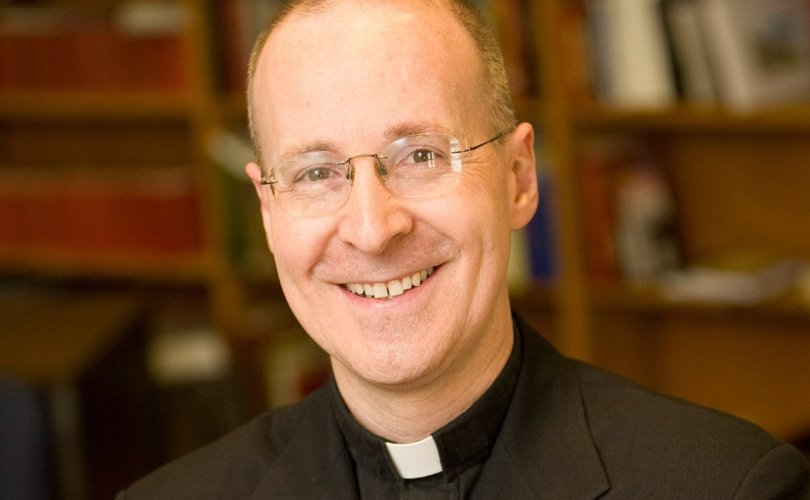 April 12, 2017 (LifeSiteNews) – The Vatican has selected a prominent LGBT-pushing Jesuit priest to be a consultor to its communications office.

The priest selected is Father James Martin, a progressive Jesuit who's the editor-at-large of America magazine. Martin's new book is titled Building A Bridge: How the Catholic Church and the LGBT Community Can Enter into a Relationship of Respect, Compassion, and Sensitivity.

In it, Martin argues Church employees shouldn't be fired for going against Church teaching by endorsing homosexual acts or openly professing homosexuality because “such firings selectively target LGBT people.” He also says “church leaders should address LGBT people by the term they call themselves.”

Several Pope Francis-appointed cardinals endorsed the book along with far-left dissident nun Sister Jeannine Gramick, who said it “shows how the Rosary and the rainbow flag can peacefully meet each other.”

The Congregation for the Doctrine of the Faith has banned Gramick from “any pastoral work involving homosexual persons.”

In 2016, Martin accepted an award from New Ways Ministry, a pro-gay group that has been condemned by the Congregation for the Doctrine of the Faith and the U.S. Catholic bishops. New Ways Ministry describes itself as “a gay-positive ministry of advocacy and justice for lesbian, gay, bisexual, and transgender (LGBT) Catholics, and reconciliation within the larger Christian and civil communities.” Part of its mission is to “identify and combat personal and structural homophobia,” and “work for changes in attitudes and promote the acceptance of LGBT people as full and equal members of church and society.”

During his speech to the gay activists at the New Ways Ministry event, Martin said the Church should embrace homosexuality’s “special gifts,” praised a 17-year-old for “coming out” on a retreat, and equated sexual proclivities with race and age. He said the Church should “lay to rest” its language about the “objectively disordered” nature of homosexual inclinations and acts.

The Catechism’s language is “needlessly cruel” and “needlessly hurtful,” he claimed, because it says “that one of the deepest parts of a person — the part that gives and receives love — is ‘disordered’ in itself.”

Many Catholics who feel same-sex attraction yet follow the Church's teachings disagree with Martin and this reductionist approach.

After President Trump rescinded the Obama transgender bathroom order, Martin tweeted to over 100,000 followers his support of boys using the girls' bathroom and vice versa.

Martin told America he's “very happy to serve the church in this new way,” and that he learned the news via Twitter.

The Vatican's Secretariat for Communications, the office Martin will be working with, runs the pope's official Twitter account, Vatican radio and TV, and the Holy See's website.

Michael Warsaw, EWTN's Chairman of the Board, was appointed as a consultor to the Secretariat for Communications. So were another Jesuit and Dominican priest, several other priests, and faculty of Pontifical universities.

Dr. Dino Cataldo Dell'Accio, Chief ICT Auditor at the United Nations, will also be a consultor to the Vatican communications office.