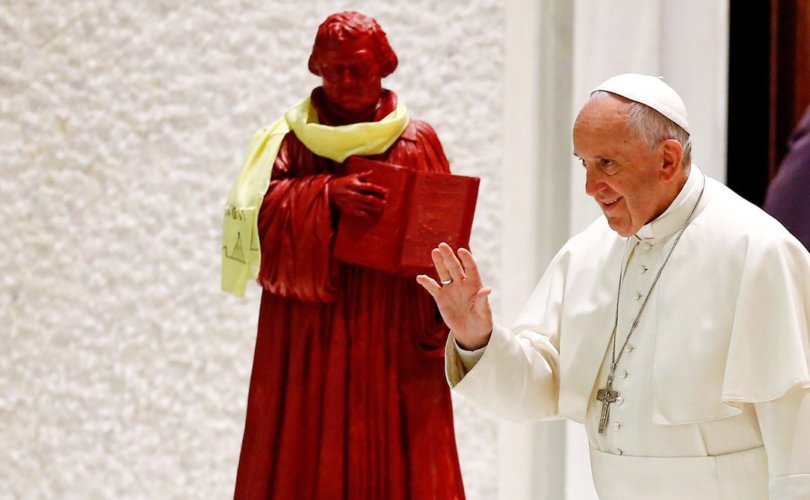 ROME, June 3, 2019 (LifeSiteNews) — Pope Francis today praised a Catholic archbishop for stepping in to “lead worship” at a Lutheran cathedral, saying it’s a sign of how far ecumenical relations have come.

On his return flight from a three-day apostolic visit to Romania, the Pope was asked what “relationship” should exist between different religious confessions, and particularly between the Catholic and Orthodox Churches.

“Walking together, this is already Christian unity,” he said, “but not waiting around until theologians agree so that we arrive at the Eucharist. The Eucharist is performed every day through prayer, through the remembrance of the blood of our martyrs, through works of charity, and also by loving one another.”

Pope Francis offered what he considers a true example of the “ecumenism of prayer,” telling journalists:

In one European city, there is a good relationship between the Catholic archbishop and the Lutheran archbishop. The Catholic archbishop was scheduled to come to the Vatican on Sunday evening, and he called me to say that he would arrive on Monday morning. When he arrived, he told me: “Excuse me, but yesterday the Lutheran archbishop had to go to one of their meetings, and he asked me: ‘Please, come to my cathedral and lead the worship.’” Eh, there’s fraternity. Coming this far is a lot. And the Catholic bishop preached. He did not do the Eucharist, but he preached. This is fraternity.

He then explained that, as cardinal archbishop of Buenos Aires, he too was in the habit of preaching in Protestant churches.

“I was invited to the Scottish church to preach a number of times,” he said. “I went there, I preached. You can do it. You can walk together. Unity, fraternity, extending a hand, looking after each other, not speaking ill of others.”

“We all have defects,” he added, “but if we walk together let’s leave our defects to the side. Let the spinsters criticize us.”

In his inflight comments, Pope Francis then turned more specifically to Catholic-Orthodox relations.

He said the “majority” of faithful who were present prayed the ‘Our Father’ with both Orthodox and Catholics. “The people go beyond us leaders,” who “have to balance things diplomatically” and keep to “diplomatic customs and rules” so that “things don’t fall apart.”

The Pope added, however, that he and other religious leaders do pray together “when we are alone.”

“I have the experience of prayer with many, many pastors: Lutherans, Evangelicals, and even Orthodox. The patriarchs are open,” he said.

The Pope then told journalists:

We Catholics also have closed people who do not want [to pray together] and say that the Orthodox are schismatics. That’s old business. The Orthodox are Christians. But there are some Catholic groups that are a bit fundamentalist. We have to tolerate them, and pray for them, that the Lord by the Holy Spirit softens their hearts. But I prayed during both [Our Fathers]. I did not watch [Romanian Orthodox Patriarch] Daniel, but I believe that he did the same.

The traditional position of both Orthodox and Catholics is that public prayer with those in schism from the Church should not be attempted. This position has often softened in recent years partly due to ambiguity as to the existence of the schism between Rome and Constantinople. Stricter voices among Orthodox and Catholics would still maintain that all communicatio in sacris is forbidden with those outside the visible church.

Pope Francis may be referring to the apparently changed situation of Catholic and Orthodox Churches relative to one another, brought about by the mutual withdrawal of excommunication between Rome and Constantinople issued at the end of the Second Vatican Council by Pope Paul VI and Patriarch Athenagoras.

However, whatever the significance of this event (and it should be said that the excommunication Paul VI withdrew was never validly served in the first place), Catholics do not pray for the Orthodox patriarchs in their liturgy nor do the Orthodox pray for the Pope. Nor is there sacramental intercommunion between the Churches.

Therefore, if the traditional Catholic prohibition against prayer with those outside the Church is still in force, then Catholics are not free to pray with the Orthodox nor (if they sincerely believe they are the true Church) are Orthodox free to pray with Catholics. This is the more hardline position of a significant portion of the Orthodox Communion.