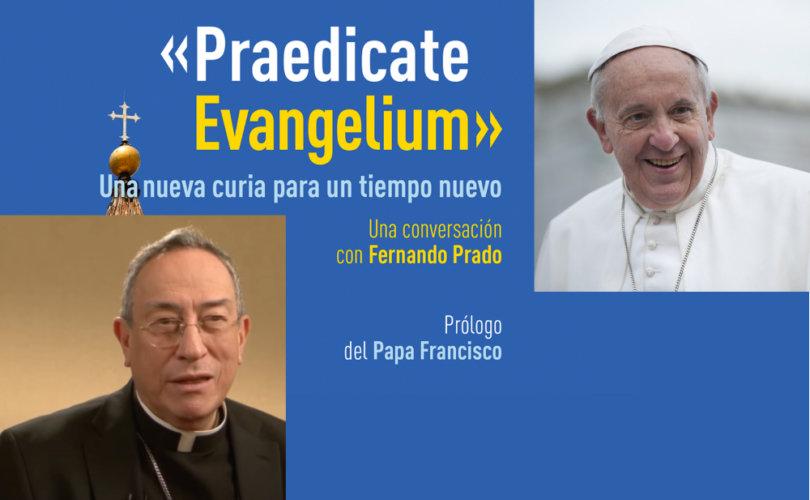 VATICAN CITY (LifeSiteNews) – Pope Francis has doubled down on his recent reforms of the Roman Curia, praising his confidante, the controversial Cardinal Óscar Maradiaga, for a book-length interview defending the Pope’s curial reforms.

Pope Francis praised the Honduran Cardinal Óscar Andrés Rodríguez Maradiaga, president of the Council of Cardinal Advisors and close adviser to the Pope, in a preface written for a book-length interview Maradiaga gave regarding Francis’ apostolic constitution Praedicate evangelium. Praedicate evangelium – released by surprise March 19, before even the scheduled press conference to introduce the text – is the culmination of Pope Francis’ nine-year plan to reform the Roman Curia.

The document, effective June 5, 2022, restructured all the congregations into newly named “dicasteries” and opened “roles of government and responsibility” to the laity. Pope Francis’ text has sparked speculation that women in particular will have an increased role in the government of the Church, including perhaps even female ordination of some kind, due to his dissecting governance from ministry as part of the reforms.

The Pontiff’s praise was written before Maradiaga announced during the Chrism Mass in Holy Week that he would be soon retiring as Archbishop of Tegucigalpa, although it was only announced on Vatican News after Maradiaga’s resignation news.

Maradiaga “adequately unravels the meaning and itinerary of this meticulous and decisive work of revision and proposals,” said Pope Francis of the Honduran cardinal’s explanation of Praedicate evangelium (PE).

Cardinal Maradiaga’s interview has been published in Spanish under the title “Praedicate Evangelium: A new curia for a new time” and is a conversation with Claretian priest Fr. Fernando Prado. The work was presented in Madrid April 23 and will be presented in Rome on May 5.

In the book, Maradiaga “shows that the reform of the Curia is more than the apostolic constitution,” said Francis, hinting at further changes to come in the Vatican. “Praedicate Evangelium is one of the dimensions of the reform,” he added.

Referencing the “innovations” in PE, Francis said that “many … have been introduced since the early years of the present Pontificate and have borne satisfactory fruit.” Meanwhile, unspecified “others will bear fruit in due course,” he added.

The changes he made were born out of a request circulating amongst cardinals during the 2013 conclave, claimed Francis, describing the requested reform as “urgent and necessary.”

“And so, from the very beginning, [of his pontificate] it has been working all these years,” he said.

Indeed, the 85-year-old Argentine Pontiff pointed further back than 2013 in defending his reforms, saying that Praedicate evangelium was a product of the Second Vatican Council. This controversial council – which was pastoral and not doctrinal in nature – continues to be the “compass” by which the Curia is guided, said Francis.

“Since the Second Vatican Council, the Catholic Church has carried out various reforms of the Roman Curia seeking to adapt it to the needs of the times, ecclesial life and the reception of the Council itself, which continues to be the compass.”

Reform and ‘constant dialogue with the world’ are ‘necessary’

Continuing to explain his curial reforms, Pope Francis added that “laws and documents are always limited and almost always ephemeral.”

Changing “times” and “circumstances will give the world a new color,” he said. In response to these changing times, the Church will continue “her constant dialogue with the world, with one foot firmly planted in her origins and faithful to Tradition, will once again adapt her life and her human structures to the changing conditions of the times,” he said.

Such an understanding of a “constant dialogue with the world” based on the changing times and customs appears to underlie Praedicate evangelium’s revolutionary permission for laypeople to lead Vatican dicasteries. “Thus the Church will continue to offer the Gospel to the world in a new form,” said Francis.

Pope Francis’ preface, signed March 25, 2022 but released April 22 on Vatican News, comes as yet another sign of his strong support and relationship with Cardinal Maradiaga. In addition to congratulating Maradiaga for the interview, Pope Francis thanked the 79-year-old cardinal “for his constant service to the See of Peter.”

So close is their friendship, that Martha Alegría Reichmann, the widow of Honduras’ former ambassador to the Holy See, Alejandro Valladares, and a longtime friend of Maradiaga, has accused Pope Francis of covering up for Maradiaga.

Her recently translated book Sacred Betrayals: A Widow Raises Her Voice Against the Corruption of the Francis Papacy reveals evidence that Cardinal Maradiaga covered up the sexual abuse and misconduct of his auxiliary bishop, Juan José Pineda Fasquelle, and diverted millions of dollars of Church money to fraudulent investment schemes that have since disappeared.

Speaking with the National Catholic Register in 2019, Reichmann said that Maradiaga “is very powerful because he has the absolute support of someone much more powerful, who is Pope Francis.” She added this is why it’s been easy for him to dismiss accusations as “slanders” or those accusing him as “attacking” him “so as to attack the Pope.”

Now aged 79, Maradiaga’s mandatory resignation sent in at the age of 75 has not been publicly accepted by Pope Francis, although the cardinal’s Holy Week announcement suggests that Francis may soon accept the resignation.

Yet in a January 2022 interview, Maradiaga revealed the closeness of the relationship he enjoys with Francis, perhaps explaining why his resignation has not been accepted as yet. RomeReports summarized Maradiaga’s comments regarding the Bergoglian pontificate, saying that Francis has “faithfully followed the agreements that came out of the so-called ‘pre-conclave’ meetings, in which cardinals defined a number of steps that must be taken by the next pontiff.”

These “agreements,” included the organization of the C9 Council of Cardinals, which Maradiaga heads.