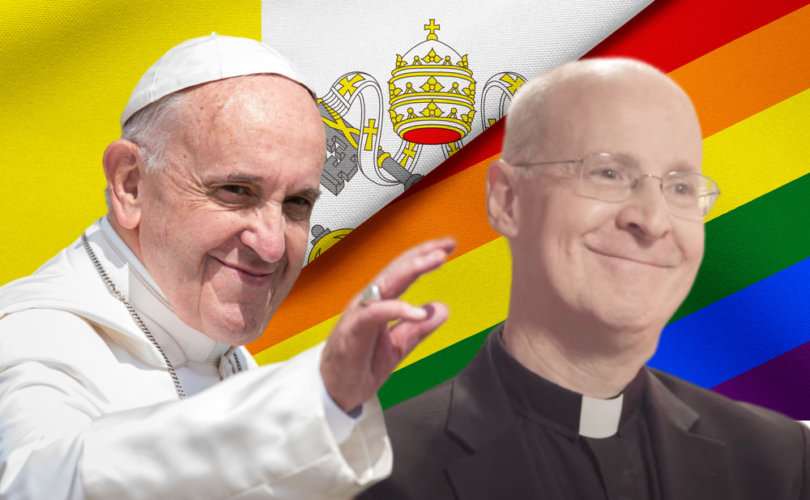 (LifeSiteNews) — Pope Francis has once again written to dissident, pro-LGBT Jesuit Father James Martin, praising the priest for a scandalous LGBT conference he recently hosted and for the “culture of encounter” he promotes amongst “LGBT Catholics.”

Fr. Martin S.J. announced that Outreach – “a new LGBTQ Catholic resource” he recently set up – had sent the Pope details about Outreach’s recent conference, which featured a range of pro-LGBT speakers advocating positions contrary to the Catholic Church’s teaching on homosexuality.

Martin noted that accompanying the conference brochure sent to the Pope was a letter “describing what happened at the conference, especially the panel conversations among people with various viewpoints.”

On the morning of August 2, Outreach received a signed letter in Spanish from Francis by way of a response, which was dated July 20. Fr. Martin’s tweet, announcing the letter, was “liked” by the Pontifical Academy for Life.

News: I’m happy to share with you this warm letter from Pope Francis, received this morning, in response to our mailing him a copy of the Outreach 2022 brochure. We’re grateful to the Holy Father for his support and his prayers. English translation here: https://t.co/NT5AjHFhqE pic.twitter.com/G42mJVpIAP

Addressing Martin as “brother,” the Pope congratulated the dissident priest for the conference, saying that “the most valuable thing” was what “happened in the interpersonal meetings.”

Referencing the COVID-19 “pandemic,” Francis wrote that it “taught us that there are things that are irreplaceable, among them being able to look at each other ‘face to face,’ even with those who think differently or with whom differences seem to separate and even confront us.” (The full text is found below.)

“When we overcome those barriers,” he continued, “we realize that there is more that unites us than what keeps us apart.”

The 85-year-old Pontiff also praised Martin for “working in the culture of encounter,” which, he said, “shortens distances and enriches us with our differences, just as Jesus did.”

Fr. Martin’s Outreach conference, held at the liberal “Catholic” Fordham University, was attended by over 200 people from across North America, Europe, Africa and South America, who Martin described as “theologians and writers; high school teachers and college professors; pastors and parish lay leaders; mothers and fathers; gay, straight, bisexual, lesbian and transgender people — all part of the same church.”

— Article continues below Petition —
SAY NO TO CARDINAL CUPICH BANNING THE TRADITIONAL LATIN MASS - DEFEND THE SACRED!
Show Petition Text
12713 have signed the petition.
Let's get to 15000!
Thank you for signing this petition!
Add your signature:
Show Petition Text

One of the non-clerical speakers at the event was Dr. Colt St. Amand, a woman who presents herself as a “transgenderqueer Two Spirit man.” St. Amand, a psychologist, provides “mental health letters” for “face, chest/breast, and genital surgeries” for “transgender” clients and assists them to obtain puberty blockers and “transition in school,” her website states.

The conference operated with a marked degree of ecclesiastical approval, not only from Francis – who wrote a letter welcoming conference attendees – but also from New York’s Cardinal Timothy Dolan, who praised Outreach’s “important ministry” as promoting the “virtue of chastity.”

The Pope’s letter is not the first time he has written in support of the relatively new Outreach group. In May, Outreach announced that Francis had responded to a letter sent him by Martin on May 5, asking the Pope questions often posed by “LGBTQ Catholics.” Francis took just three days to respond, sending a hand-written message on May 8, only days after having undergone knee surgery on May 3.

Francis decried “rejection from the Church,” saying that for LGBT individuals “I would have them recognize it not as ‘the rejection of the church,’ but instead of ‘people in the church.’ The church is a mother and calls together all her children.”

The letter was used in a PR campaign to officially launch Outreach.

Francis and Martin met privately in September 2019, in what was reportedly their third meeting, although their first substantial conversation. Both Martin, and America Magazine of which he is an “editor-at-large,” proclaimed the meeting as being “a public sign” of the pontiff’s “support” for Martin’s work promoting LGBT ideology in the name of Catholicism.

In April 2017, Martin was appointed by the Pope as one of the 13 consultors who advise the Vatican’s Dicastery for Communications, and the Vatican then invited him to speak at the 2018 World Meeting of Families in Dublin on “Exploring how Parishes can support those families with members who identify as LGBTI+.”

More recently, Francis has notably made a number of statements in support of dissident nun Sister Jeannine Grammick and her previously condemned pro-LGBT group New Ways Ministry. Grammick is a collaborator with Martin in Outreach.

Full text of Pope Francis’ letter to Fr. Martin is found below:

Thank you for the letter you sent me a few weeks ago together with the brochure “Outreach 2022.” Congratulations for having been able to make this year’s event happen in person.

I am aware that the most valuable thing is not what appears in the brochures and photos, but what happened in the interpersonal meetings. In fact, the pandemic made us look for alternatives to shorten the distances. It also taught us that there are things that are irreplaceable, among them being able to look at each other “face to face,” even with those who think differently or with whom differences seem to separate and even confront us. When we overcome those barriers, we realize that there is more that unites us than what keeps us apart.

I encourage you to continue working in the culture of encounter, which shortens distances and enriches us with our differences, just as Jesus did, who made himself close to everyone.

I assure you of my prayers. Do not stop praying for me. May Jesus bless you and the Holy Virgin watch over you.