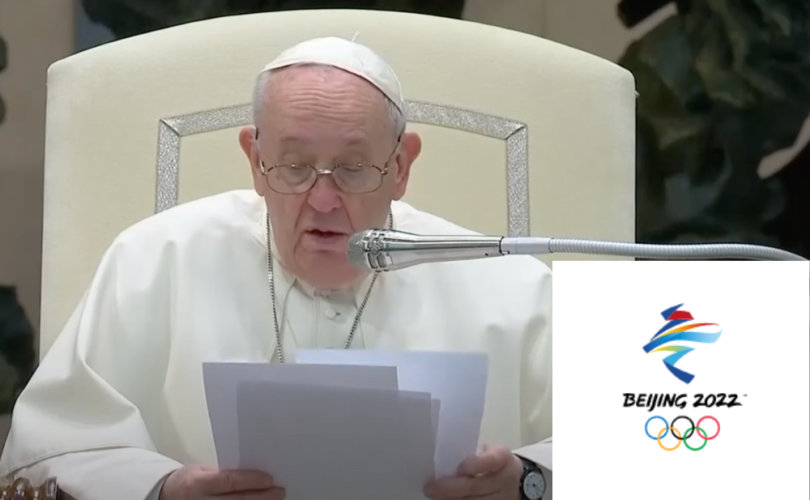 VATICAN CITY (LifeSiteNews) — Pope Francis sent a message of support to China’s Winter Olympic and Paralympic Games, writing that they are to be a “unique experience of human fraternity and peace” while avoiding any mention of the well-documented religious persecution and human rights violations.

In a tweet sent from his English language account on February 3, Pope Francis wrote, “I wish the great Olympic and Paralympic family a unique experience of human fraternity and peace. May the Games help everyone overcome prejudices and fears and make our communities more welcoming and inclusive.”

I wish the great Olympic and Paralympic family a unique experience of human fraternity and peace. May the Games help everyone overcome prejudices and fears and make our communities more welcoming and inclusive.

The tweet received immediate criticism from many online, with the prolific, if pseudonymous, Twitter commentator Monsignor Ferrari — believed to be a Vatican insider — criticizing the Pope for not mentioning the persecution of the Uyghur people.

“No reference to Uighar genocide, Tibetan concentration camps, suppression of human rights in Hong Kong, destruction of churches,” he wrote. “Francis’ uncritical support of the Chinese Communist Party is deeply shameful for all Catholics.”

No reference to Uighar genocide, Tibetan concentration camps, suppression of human rights in Hong Kong, destruction of churches. Francis’ uncritical support of the Chinese Communist Party is deeply shameful for all Catholics,

The tweet came after Pope Francis demonstrated his support for the Beijing Winter Games in a special message at the end of his February 2 General Audience. “I warmly greet all participants; I wish the organizers every success and the athletes the very best. Sport, with its universal language, can build bridges of friendship and solidarity between people of all cultures and religions,” Francis said.

He praised the International Olympic Committee for adding the word “community – together” to its motto, so that “the Olympic Games may bring about a more fraternal world.”

“Blessed are the peacemakers,” he closed.

The Winter Olympics started February 4 in Beijing. The Paralympics are due to start on March 4. A number of nations have officially boycotted the Games, which have been styled “Genocide Games” by some protesters.

In light of the religious persecution levied against Christians and genocide of the Uyghur Muslims, along with long-standing human rights abuses such as forced abortions, Americans have been urged by the Genocide Games Task Force to boycott watching the games.

Human Rights Watch has also called for a boycott of the Winter Games, with the group’s China director saying, “It’s not possible for the Olympic Games to be a ‘force for good,’ as the International Olympic Committee claims, while the host government is committing grave crimes in violation of international law.”

“The spectacle of the Olympics cannot cover up genocide,” added Omer Kanat, executive director of the Uyghur Human Rights Project. “It’s hard to understand why anyone feels it’s even possible to celebrate international friendship and ‘Olympic values’ in Beijing this year.”

Nonetheless, Pope Francis has doubled down on his support for the Beijing Winter Games, with the undersecretary of the Pontifical Council for Culture, Msgr. Melchor Sanchez de Toca, telling EWTN that the Olympic Games are “close to the Pope’s heart and, therefore, the heart of the Church.”