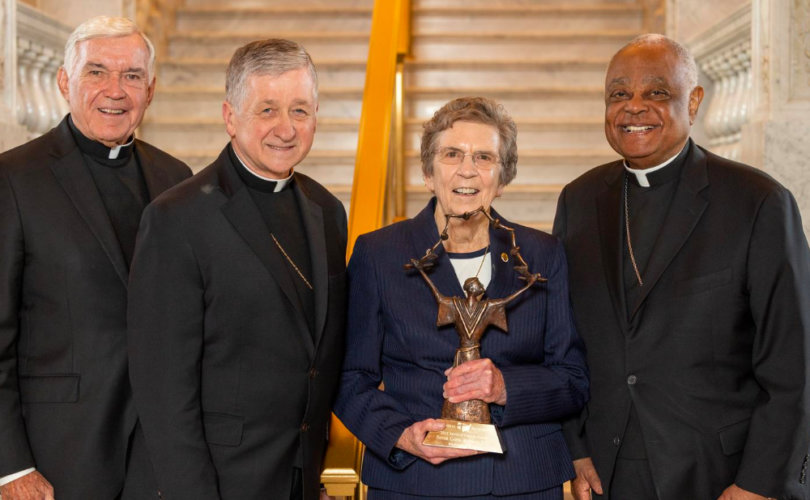 WASHINGTON, D.C. (LifeSiteNews) – Pope Francis congratulated a U.S. nun known for her prominent support of the pro-abortion Obamacare against the wishes of the U.S. hierarchy, saying she continues the “healing ministry of Jesus Christ.”

Sister Carol Keehan, D.C. received the 2022 Spirit of Francis Award from the non-profit fundraising group Catholic Extension due to her “advocacy for the poor and universal access to health care.”

The event was attended by Papal Nuncio to the U.S. Archbishop Christophe Pierre along with dissidents Cardinals Blaise Cupich and Wilton Gregory.

At the award ceremony, held in the United States Library of Congress, Keehan was given a letter written by Vatican Secretary of State Cardinal Pietro Parolin conveying the praise of Pope Francis.

“His Holiness willingly associates himself with this recognition of her many years of dedicated leadership in continuing the healing ministry of Jesus Christ through the provision of quality health care for all, especially those most in need,” read the letter, which was sent to Keehan via Cardinal Cupich.

Continuing, Parolin’s letter noted that Francis “appreciates as well her generous service to the Holy See and her fidelity to the charism of Saint Vincent de Paul, carrying out the apostolate of charity in ‘the consciousness that we are responsible for the fragility of others as we strive to build a common future.’” The letter was read aloud at the gala dinner by Archbishop Pierre.

Francis’ praise of Keehan was echoed by the high-ranking members of the U.S. hierarchy, with Cupich stating that “Sister Carol stands in a long line of consecrated religious women who have led the way in providing quality health care that leaves no one behind.”

Keehan was appointed by Pope Francis to lead the Public Health Task Force of the Vatican Covid-19 Commission in March 2020, which promotes the abortion-tainted COVID jabs. Cupich highlighted this, praising her “great leadership,” and her role of “advising the Holy See on healthcare issues, and most recently, cooperating with Pope Francis’ initiatives to educate the world about COVID-19 vaccination.”

Meanwhile, Father Jack Wall, president of Catholic Extension, spoke of the “undeniable” link between Keehan and Catholic Extension’s mission. “We both believe deeply in our vocation to live out the Gospel by transforming our society, our country, and our world,” he said.

Keehan rose to prominence as one of the most symbolically important supporters of the abortion-funding Obamacare. Upon the passage of the bill into law, she was notably awarded one of the pens used to sign it by former President Barack Obama. Reporting on the gift at the time, Politico wrote that Keehan was “a Catholic nun who broke with the church’s hierarchy to endorse the bill.”

Keehan, who served as president and CEO of Catholic Health Association (CHA) from 2005 through 2019, was personally blamed in 2012 by then-head of the United States Conference of Catholic Bishops (USCCB) Cardinal Francis George for her role in the bill’s passage.

“The Catholic Health Association and other so-called Catholic groups provided cover for those on the fence to support Obama and the administration,” George said. He added that “Sr. Carol and her colleagues are to blame” for the passage of the healthcare bill, as the USCCB opposed the bill.

— Article continues below Petition —
STAND with Abp. Cordileone as he bars Nancy Pelosi from Holy Communion until she repents
Show Petition Text
15336 have signed the petition.
Let's get to 17500!
Thank you for signing this petition!
Add your signature:
Show Petition Text

CHA’s support of the bill “has resulted in confusion and a wound to Catholic unity,” George noted.

Obama himself publicly thanked CHA and Keehan for their support of Obamacare, telling the group in June 2015 that “we would not have gotten the Affordable Care Act done without Sr. Carol … I want to thank the Catholic Health Association.”

“Without your moral force, we would not have succeeded,” Obama added, and Keehan said CHA was “delighted and honored” to have the pro-abortion president address CHA’s anniversary event.

After the passage of the bill, Keehan continued to distance herself from Catholic moral teaching, releasing a statement supporting a Catholic hospital’s decision to perform an abortion. Another nun, Sister Margaret McBride, who held a leadership role in the hospital, was automatically excommunicated for having approved the abortion – and later returned to the Church.

Speaking to dissident Jesuit-run America Magazine in 2019, she doubled down on her prior support for the ACA, saying “I don’t have any regrets.”